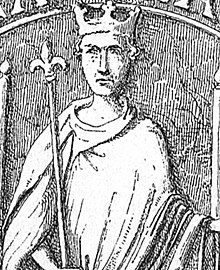 Waldemar II on his seal

Waldemar II was the younger son of King Waldemar I the Great of Denmark and his wife Sophia of Minsk (* approx. 1141; † 1198), daughter of Prince Vladimir III. from Minsk and Hrodna and the Rikissa from Poland .

Waldemar became Duke of Schleswig in 1182. Under the government of his brother Knut VI. of Denmark he conquered Holstein together with him in 1201 at the Battle of Stellau . Because of this victory, Waldemar II was nicknamed Sejr, "the winner".

After Knut's death in 1202 he became King of Denmark and conquered Mecklenburg , Pomerania and Pomerania . Lübeck and Hamburg recognized its protective sovereignty. At the turn of the year 1214/15 the German king and later Roman emperor Friedrich II gave him his conquests in the empire formally as a fief. In 1218 he crowned his 9-year-old son Valdemar the Unge (the younger) as co-king. However, he died in a ship accident in 1231. In 1219 Waldemar founded the Diocese of Reval and began to conquer Estonia . He also intervened several times in Norwegian and Swedish throne disputes.

On the night of May 6th, 1223, Waldemar and his son were kidnapped by Heinrich Graf von Schwerin from the Danish island of Lyø , where they had rested from the hunt, unguarded. The prisoners were brought to the German coast by ship. Since Schwerin was occupied by the Danes, Waldemar and his son were first hidden in Lenzen in the Mark Brandenburg region and soon after in the Waldemar tower of Dannenberg Castle . After the reconquest of the County of Schwerin in 1225, the two were held in Schwerin Castle.

Heinrich von Schwerin made high demands for the release of Waldemar, from which he was neither threatened by Denmark nor by Pope Honorius III. was dissuaded. He found support from the Mecklenburg ruler Heinrich Borwin II. , Count Adolf IV. Von Schauenburg and Holstein and the Bishop Gebhard II. Zur Lippe of the Diocese of Bremen . Since Waldemar did not respond to Heinrich's demands, the situation came to a head and the battle of Mölln took place in January 1225 , in which the Danes were defeated.

Waldemar finally consented to Heinrich's demands, which were also joined by those of his allies. In November 1225, in the Treaty of Bardowick, it was agreed that Waldemar and his son would be released against payment of 45,000 marks of silver, the assignment of Schwerin and Holstein, renunciation of all German fiefdoms except for the Principality of Rügen and the granting of complete freedom of trade for the German cities. Waldemar also had to forego revenge and hold three of his sons hostage.

The Danish position as a great power in the Baltic Sea region was severely shaken by Waldemar's captivity. The pursuit of recovery finally culminated on July 22nd, 1227 at the Battle of Bornhöved . Waldemar II was defeated by the coalition army. Duke Otto I of Braunschweig , fighting on the Danish side, was taken prisoner by the Count of Schwerin. Waldemar was forced to renew Bardowick's contract. The Danish empire in the Baltic Sea region collapsed. He had to give up Holstein and apart from Rügen and Estonia he also lost all conquests on the southern Baltic coast .

In 1231 King Waldemar II had a tax record book , the Waldemar Earth Book , created in which all of the king's possessions and income were systematically recorded. In addition, during his reign, the first Danish law books that emerged Scanian Law ( Skånske Lov ), the Zeeland law ( Sjællandske Lov ), and finally the 1241 Jütische law ( Jydske Lov ), which in the Duchy of Schleswig formally owned until 1900 valid.

Waldemar II is buried in the Marienkirche in Ringsted , now St. Bendt .

From 1205 Waldemar II was first married to Margarete Dagmar († May 24, 1212), a daughter of Ottokar I of Bohemia and Adelheid of Meißen . The following children came from this marriage:

He also had two illegitimate sons known by name: