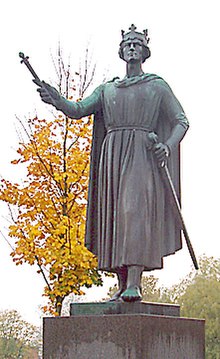 Youth and successor to Erik III.

Waldemar was the son of Knud Lavard , Duke of South Jutland (Dux Danicae) and velvet ruler of the Abodrites , and grandson of King Erik Ejegod . He was born a week after his father was killed by King Magnus of Sweden . His mother Ingeborg von Kiev , daughter of Mstislaw I , Grand Duke of Kiev , gave him the name of her grandfather, Grand Duke Vladimir II. He grew up in Fjenneslev , at the court of Asser Rig, a Zeeland chief from the Hvide family with his sons Esbern and Absalon , who later became Bishop of Roskilde (1158) and Archbishop of Lund (1177), who both became his friends and advisers.

When it was 1146 after the resignation of King Erik III. to succession disputes, in which the two pretenders Sven III. Burrs , son of Waldemar's uncle Erik II. Emune , and Knut V. , the son of Magnus, his father's killers were, the 15-year-old Waldemar sided with Sven, who for him the office of Prefect in Schleswig was .

In 1153 Sven fell out with the Hvide family, whereupon Waldemar separated from him and joined Knut Magnusson, to whose half-sister he got engaged through his mother Sophia von Minsk in 1154 and whom he married in 1157. In the same year 1154 Knut and Waldemar were elected kings of Denmark on the Viborg country thing . When Sven, who had to evade exile in 1153, returned in 1157, the now three pretenders agreed on a division of the country, in which Waldemar received Jutland . However, Sven tried to get rid of the competition at a banquet he held for Knut and Waldemar ( Blood Festival of Roskilde , Danish Blodgilden i Roskilde, on August 9, 1157). Knut was beheaded in this attack, Waldemar escaped wounded and prepared for the decisive battle that took place on October 23, 1157 on the Grathe Hede . Sven was defeated and killed while trying to escape, so that Waldemar was now the sole king of Denmark.

Waldemar's government is characterized by a policy of internal reconciliation and by his relationships with Emperor Barbarossa , whom he paid homage to in 1158 and 1162, and the Saxon Duke Heinrich the Lion , with whom he concluded a friendship treaty in 1159. It is unclear, however, to what extent Waldemar's policy went back to the latter or was determined by his friends Absalon von Lund and Esbern Snare .

In 1160 Waldemar and Heinrich moved together against the Abodrites in Mecklenburg. In the previous year, the Danish king had started his almost annually repeated naval attacks against the Ranen on Rügen , who in turn had regularly devastated the coasts of Denmark, and which on June 15, 1168 in the conquest and destruction of their sanctuary of Jaromarsburg and taking possession of their treasures on the Cape Arkona culminated - the Christianization of Rügen was mainly due to Waldemar's rule.

Parallel to his activities beyond the national borders, he secured access to his empire by expanding the Danewerk ("Waldemarsmauer") and building military installations with which the straits between the Baltic Sea and the Kattegat could be controlled ( Kalundborg , Korsör (Tårnburg), Nyborg , Sprogö and Vordingborg on the Great Belt , Copenhagen and Helsingborg on the Oresund ).

His domestic political successes also include the fact that he succeeded in making the monarchy in Denmark hereditary and replacing the electoral monarchy. Waldemar had ended a long-standing dispute with Bishop Eskil von Lund and was in return from Pope Alexander III in 1165/66 . recognized as hereditary king. Waldemar confirmed this by giving his son Canute VI in 1166 . proclaimed king. On June 25, 1170 Knud VI. crowned in Ringsted . At the same time, Waldemar's father, Knud Lavard, was canonized, adding a religious foundation to the Danish monarchy.

Waldemar married Sophia von Minsk (* probably 1141, † 1198) in 1157 , a daughter of Prince Volodar von Minsk and the Polish Princess Richeza . Since Sophia's mother had previously been married to Magnus I, Sophia was the half-sister of Knut V. Her children were:

Waldemar also had an illegitimate son, Christoph (* probably 1150; † 1173), Duke of South Jutland (dux Iuciae ) . The unhappy love of Waldemar and Tove was designed as a legend and served the composer Arnold Schönberg as the basis for the Gurre songs .

Waldemar was buried in the Marienkirche (today St. Bendt) in Ringsted . Sophia married Ludwig III around 1184 in her second marriage . , Landgrave of Thuringia .