Course of the battle of Muhi

After the Battle of Muhi, Tatars dragged enslaved Hungarians away 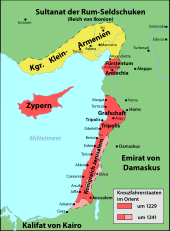 The holy land after the barons' crusade

The marriage of Beatrix and Heinrich Raspe

Depiction of the sea battle of Giglio from the Nuova Cronica by Giovanni Villani, early 14th century

On August 22nd, after almost 14 years of pontificate, Pope Gregory IX dies . in Rome. This temporarily ends the conflict with Emperor Friedrich II , who prevented the meeting of a council convened by Gregory at Easter by taking several church princes prisoner. For the first time, a conclave is convened to elect a successor for Gregor . The Roman Senator Matteo Rosso Orsini has the cardinals arrested in the Septasolium . One of the cardinals dies as a result of the unbearable heat and the catastrophic hygienic conditions. 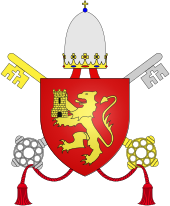 Coat of arms of Celestine IV.

Nevertheless, the conclave can only agree on the Cardinal Bishop of Sabina, Goffredo da Castiglione, on October 25th . This will enable those cardinals who want to work towards a reconciliation with Emperor Friedrich to prevail. But Goffredo, who takes the name Celestine IV , is so weakened by the conclave that he dies on November 10 , before his enthronement . The sedis vacancy that followed lasted for almost two years.

The sarcophagus of Count Guigues IV in Montbrison Cathedral