The English King John Ohneland plans to hit Philip II of France with a pincer attack in the Franco-English War and thus to recapture the Angevin Empire . While he is leading an expedition to Poitou himself, another English army under William Longespée is supposed to unite in Flanders with the allied armies of the Roman-German Emperor Otto IV and other allies.

King John lands in La Rochelle in February . After initially making forays into the Limousin and Gascony, he marched through Poitou in May , where he first beat the Lusignan family and finally won them over with a promise of marriage between his daughter Johanna and Hugo X. von Lusignan . Then he turned north, conquered Nantes and was able to move into Angers again. While besieging the castle of Roche-aux-Moines north of Angers, the French Prince Ludwig appears with an army in front of the castle. John's French allies abandon him and flee. 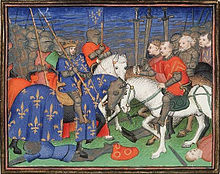 Victory of Philip II at Bouvines

Double sarcophagus of Alfonso VIII and Eleanor of Castile