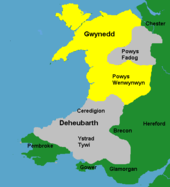 In the spring, Llywelyn from Iorwerth , Prince of Gwynedd , calls the Welsh princes to a meeting at Aberdyfi Castle in Ceredigion . At this meeting the remaining parts of Deheubarth are divided among the descendants of Lord Rhys, who died in 1197, according to Welsh law: Maelgwn ap Rhys receives the western part of the empire, Ceredigion south of the River Aeron and Llanmyddyfri . Rhys Gryg received the Cantref Mawr in Ystrad Tywi as well as Cantref Bychan and Cydweli , while the sons of Gruffydd ap Rhys , Owain and Rhys Ieuanc , received Ceredigion north of the Aeron. In return, the descendants of Lord Rhys recognize the supremacy of Llywelyn from Iorwerth. The Aberdyfi Agreement ends the wars of succession in Deheubarth after almost 20 years.

Troubled by the armor of Theodoros I Komnenos Dukas in Epirus , the Latin emperor Heinrich marches to Thessaloniki in the spring to carry out a preventive attack against Epirus from there. Before that happens, he dies on June 11th , presumably from poison. Since he left no descendants, the nobles chose his brother-in-law Peter von Courtenay , who immediately set off from France to the east. Theodoros of Epirus conquered Macedonia and Thessaly in the meantime . The Bulgarian Boljar Alexius Slaw becomes his vassal. 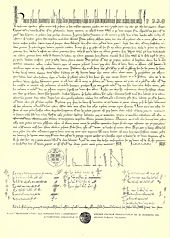