The Fifth Crusade under Johann von Brienne cannot make any progress against the Ayyubids under Sultan Abu-Bakr Malik al-ʿAdil I for months , as they repeatedly avoid an open field battle. On January 10 dies Hugo I of Cyprus , causing its contingent to return home. Also Bohemond IV. Of Antioch , who in the same year Melusine of Jerusalem marries, and Andrew II. Of Hungary return to their home countries in the course of January.

Crusader fighting the Saracens in front of Damiette, representation from the Chronica majora by Matthew Paris

Eastern Europe and the Balkans

Facade of the Escuelas Mayores of the University of Salamanca 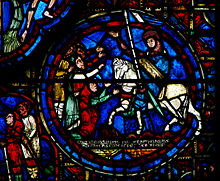 Depiction of Count Theobald in a window of Chartres Cathedral 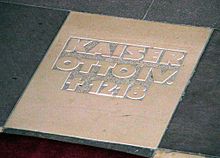 Grave slab of Otto IV in the Brunswick Cathedral