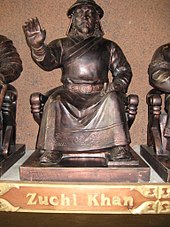 Statue of Djochi Khan in the Mongol Palace of Gachuurt

Dschötschi Chan ( Mongolian ᠵᠥᠴᠢ Sutschi , * 1183 ; † 1227 ) was a Mongolian prince of the Genghis family . He was the eldest son of Genghis Khan and his main wife Börte . Dschötschi was the progenitor of the khans of the later Golden Horde and the first princes of the Uzbeks and Kazakhs . He was the brother of Tschagatais , Ögedeis and Toluis . Dschötschi must not be confused with Dschötschi Qasar or with Qasar or Khasar, since this was a brother of Genghis Khan and thus an uncle of Dschötschi.

The origin of Jötschi is controversial. The name Dschötschi means "the stranger". Genghis Khan's main wife, Börte , was captured by the Merkites, who were enemies of Genghis Khan , and held hostage for a while. Dschötschi was born shortly after their liberation, and so it cannot be ruled out that it was not Genghis Khan but a Merkit who was Djotschi 's biological father. Genghis Khan recognized - quite in contrast to his later sons - Jötschi legally as his firstborn, while the younger Tschagatai Jötschi publicly insulted several times as a "Merkit bastard".

In the year of the rabbit (1207) Jötschi received the order from his father Genghis Khan to subdue the "northern forest lands" and the "western khanates". Many peoples like the Uyghurs voluntarily submitted to the Mongolian supremacy, others like the Kyrgyz , who had a center of power on the middle Irtysh , had to be subjected to bloody submission. In 1209 Jötschi returned to his father as a successful general . As a result, he and his brothers took part in their father's various campaigns. This was also the case in 1218/21, when Genghis Khan took action against the empire of the Khorezm Shah . Dschötschi brought his brother Tschagatai into disrepute with his father. In 1221 there was an open dispute between the two: During the siege of the city of Urgensch near today's Khiva, Tschagatai publicly insulted his older brother again as a "bastard" and Jötschi then neglected the tasks assigned to him in the Volga region .

Dispute over the succession

As early as 1218, at the instigation of Börtes, the question of the succession was clarified at a royal assembly. Both Djotschi and Chagatai claimed the dignity of khans. In the end, both agreed on their brother Ögedei , the favorite son of Genghis Khan and middle of the brothers, as successor. The youngest brother, Tolui , was put at his brother Ögedei's side as the “keeper of the ancestral lands” as an advisor.

After the successor dispute, the Jötschi and Chagatais khanates competed for large areas in Central Asia . Chagatai claimed areas that were in the western areas conquered by Jötschi. So it was finally decided to administer these disputed areas jointly and a governor was sent from each family. But with that the Mongolian empire of Genghis Khan showed the first cracks, which were to last until 1240. In the east of the Chagatais empire was the home of the Ögedeiids , who in turn raised claims to the "Ulus Tschagatai". In 1303 this khanate was divided between the "Ulus Dschötschi" and the "Ulus Tschagatai".

Foundation of the "Ulus Dschötschi"

After the overthrow of the Khorezm Shah Empire (1221) and further campaigns such as the Battle of the Kalka (1223), Jötschi did not return to the Mongolian homeland with his father in 1224. Instead, he remained in the "Khanate of the Westerners" ( Western Siberia ) that had been awarded to him and probably settled on the Irtysh. After his death, the papal envoy Johannes de Plano Carpini mentioned his camp in this region (in which only Jötschi's wives lived) and it is believed that his grave was there for a long time.

In 1226 Dschötschi refused his father allegiance to a campaign against the Tangut empire , alleging an illness. Instead, Dschötschi ruled the subordinate khanate autonomously, paving the way for the later Golden Horde .

To this day it is unclear how Dschötschi died in February 1227. Due to his refusal to take part in the Tangut campaign, Genghis Khan now planned a campaign against his eldest son. So today there are at least three variants of his death:

For a long time it was not known where the tomb of the Mongol prince was. But today it is known that his mausoleum is located 50 km north of the city of Sheqasghan .