He was best known for betraying King Philip II of France several times .

Growing up at the French court, he became a childhood friend of the later King Philip II August, but initially fought under the Plantagenet flag - on the orders of his father . After the death of Heinrich II Plantagenet in 1189, the Dammartin submitted to the crown. Rainald married a cousin of the king, Marie of Châtillon , daughter of Guido II of Châtillon and Alix of Dreux.

But on the advice of King Philip II, Rainald disowned his wife around 1190 and kidnapped Ida of Alsace († 1216), daughter of Matthew of Alsace and Mary of Blois. Ida was the Countess of Boulogne and widowed twice. Through the forced marriage to Ida in 1191 he came into possession of Boulogne, which until then had been a fiefdom of the Count of Flanders . But Rainald took the county as a fief directly from the King of France, who wanted to weaken the powerful Count of Flanders. By separating from his first wife, however, Rainald had made enemies of their family members from the Dreux family , namely Bishop Philipp von Beauvais . They were also joined by the neighboring Count of Guînes , who had previously been engaged to Ida. After a feud with Count Hugo IV of Saint-Pol in 1197, Rainald switched to Richard the Lionheart 's side, but after his death in 1199 returned to the side of King Philip II, from whom he was received with grace. His friendship with the king protected him from his enemies for the time being. In 1201 he betrothed his daughter to the king's son Philipp Hurepel , in 1204 he was additionally transferred to the county of Aumale, which he passed on to his brother Simon in 1206 and received the county of Mortain in return. Rainald thereby became one of the most powerful lords in northern France. 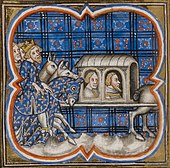 The feud with Bishop Philipp von Beauvais, however, led to a break with the king in 1210, whom Rainald had threatened in front of the assembled court. The king opened court proceedings against Rainald and in 1211 occupied Mortain Castle , which Rainald had fortified against a royal decree. Then the king also took Boulogne , which Rainald and his brother Simon forced to flee France. Together with Count Ferrand of Flanders , he moved to the court of King John in England in the autumn of 1213 , to whom they paid homage there and thus committed felony (high treason) towards the King of France .

In the spring of 1214 the traitors returned to Flanders with an English army under the Earl of Salisbury and took up the fight against France. Rainald attacked Cassel in January 1214 and devastated the county of Guînes in May. They then united with the army of Emperor Otto IV and marched against the King of France. On July 27, 1214, the decisive battle at Bouvines took place , in which Rainald led the right wing of the Anglo-Welf alliance. Allegedly, he is said to have advised against the battle because he did not want to fight on a Sunday, about which he got into an argument with his colleague Hugo von Boves .

Of the allies, Rainald fought to the last, even after defeat had loomed. Like the Count of Flanders, he was finally captured and initially locked in a dungeon in Péronne . He was later transferred to the castle of Goulet , where he remained in custody until his death in 1227. Shortly before, the regent Blanka of Castile had released the Count of Flanders. However, she hesitated about the release of Rainald, as she had to rely on a good understanding with her brother-in-law Philipp Hurepel, who had meanwhile taken over the property of his father-in-law. Allegedly Rainald recognized the hopelessness of his pardon and committed suicide.

Rainald and Marie had no children; with Ida von Alsace he had a daughter: