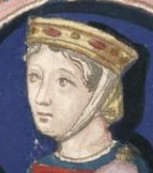 Mathilde von Dammartin (also called Mathilde II of Boulogne ; † 1259 ) was a Countess of Dammartin and of Boulogne from the Mello family , and through her second marriage from 1248 to 1253 a nominal queen of Portugal . She was a daughter of Count Rainald I von Dammartin († 1227) and Countess Ida von Boulogne († 1216).

Countess of Boulogne and Dammartin

Group of statues of Mathilde von Dammartin and her first husband Prince Philip “the Borstigen” on the facade of Chartres Cathedral.

As the only child of her parents, Mathilde was considered to be the sole heir to her property. As a toddler, she was betrothed by her father in Compiègne in August 1201 to Prince Philip “the Borstigen” , who was only about a year old , the second son of King Philip II August . The lifelong friendship between the two fathers was to experience a dynastic manifestation in the marriage of their children. The engagement was renewed in May 1210 in Saint-Germain-en-Laye and also outlived the subsequent felony of the father to the king, which culminated in his capture at the Battle of Bouvines on July 27, 1214. Mathilde was probably taken into the care of the royal household and brought up together with Prince Philip. Her ongoing engagement should have saved her from expropriation by the crown, as the expected marriage would mean that her inheritance would pass into the royal family in accordance with the principle of inheritance. It is unclear when the marriage was legally formalized, but this should have happened by 1218 at the latest, when Mathilde was first named in a royal document with the title “Countess von Dammartin”. Her husband was knighted on May 17, 1222 by the Count of Champagne and in August 1223 he was first mentioned in a document with the title "Count of Boulogne". Apparently Mathilde will have been restituted in her parental inheritance by the old King Philip II August until his death on July 14, 1223, since her husband held the corresponding titles solely by virtue of her right of inheritance ( iure uxoris ) . However, Mathilde does not seem to have got the full inheritance back from her father, whose imprisonment was continued under the rule of her brother-in-law, King Ludwig VIII . In a document dated February 1224, her husband is only named in possession of a quarter of the county of Dammartin, while at the same time representatives of the crown ( Bailli ) appeared as officials there to an increasing extent . It is probably due to this circumstance that Mathilde waived the count's title for Dammartin in her documents with a few exceptions, while she consistently used that for Boulogne, which she held in full.

After the death of King Louis VIII on November 8, 1226, Philip briefly joined the opposition of the barons against his sister-in-law Blanka of Castile , against whom he, as the oldest living representative of the royal house, had a claim to the reign of his underage nephew Louis IX. has asserted. However, after his inferiority to his sister-in-law was quickly revealed, he was reconciled with her by the end of 1227 and renounced the reign in favor of recognition of the legacy of Rainald von Dammartin. Mathilde's father died in prison that same year. Towards the end of 1233, Philipp "the bristle" also wrote his will and died in January 1234.

The daughter Johanna († January 1252) emerged from the marriage with Prince Philipp , who was betrothed in 1236 to Walter von Châtillon (X 1250), heir to Nevers, Auxerre and Tonnerre. Contrary to all later claims, Mathilde and Philipp did not have a son named Alberich (Aubry), who renounced the parental inheritance in favor of a life in England and married a son to a daughter of "King Simon of England" there. This rather legendary and unproven information comes from the unreliable works of Jean-François Dreux du Radier from the 18th century. But a son is not mentioned in Philip “the bristle's will” or in any other document by him and Countess Mathilde.

In January 1234 Mathilde in Saint-Germain-en-Laye spoke to King Louis IX. took the feudal oath for their possessions. At the instigation of the French crown, she was then betrothed to the Portuguese Prince Alfons , who had exiled to France and whom she must have married by the summer of 1239 at the latest.

Alfons was the nephew of the French queen mother Blanka, who tried to gain political influence in Portugal in favor of France through him. She therefore moved Pope Innocent IV to replace the incumbent King Sancho II , who was in dispute with the church, at the Council of Lyon in the reign of Portugal with his brother Alfons, who immediately withdrew to his homeland in the late year 1245. It is unclear whether Mathilde accompanied him to Portugal; she does not appear again until April 1247 in her homeland, while her husband in Portugal after the death of her brother in 1248 as Alfons III. ascended the throne. From then on, their marriage only existed on paper, but remained legally valid, which for Alfons III. The problem became when he entered into a second marriage in bigamy in 1253, which was not recognized by the church during Mathilde's lifetime. It is not clear whether Mathilde would ever have worked towards the annulment of her second marriage. On the other hand, it has also waived the use of the royal statute in its documents.

Mathilde's only child and heiress died in 1252, two years after her son-in-law had died on the crusade in Egypt without leaving any children of his own, indicating that her inheritance would be divided between her cousins.

A Portuguese chronicle records that Mathilde died after the birth of her first stepson Dionysius (born October 9, 1261) and before the birth of the second Alfonso (born February 6, 1263), whereby the former was supposed to be an illegitimate birth. This information is obviously wrong, since Mathilde's last document dates to November 13, 1258 and her cousin Matthäus von Trie first documents as Count von Dammartin in October 1259, which he certainly would not have done during her lifetime. The English chronicler Matthäus Paris also placed her death in 1259.

Mathilde von Dammartin had a daughter with Prince Philipp "the bristle" of France:

Children from her second marriage to King Alfons III. from Portugal are not known.