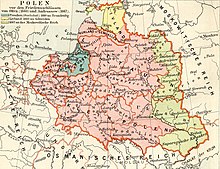 Polesia ( "the or Polesia", Belarusian Палессе Paleśsie , Ukrainian Полісся Polissia , Russian Полесье Polesje , Polish Polesie , Lithuanian Polese , German and Polesia ) is a historical region in Poland , Belarus , the Ukraine and Russia - such as West-East -Looked for direction. It is not to be confused with the similar sounding Podlachia (Podlasia) .

In terms of landscape, the area is a vast, wooded river valley ; it is dominated mainly south of the Pripyat the Pinsk Marshes , the square kilometers with about 90,000 area the largest swamp area in Europe are. As the snow melts, the Pripyat and its tributaries transform the lowlands into a wilderness of lakes, swamps and forest islands.

Since the Middle Ages, Polesia was part of the Kievan Rus . After the Mongol storm of 1241, the area came under the influence of the Grand Duchy of Lithuania and became part of Poland-Lithuania in the course of the Lublin Union of 1569 . After the Third Partition of Poland in 1795, Polesia belonged to the Russian Empire .

Between 1920 and 1939 the area west of the Horyn came to the Second Polish Republic , the eastern part to the Soviet Union . The Polesian Voivodeship was established in Poland with the capital Brest. In the 1930s, the Polish government wanted to have a large part of the Pripjet swamps drained, but failed due to lack of money and corruption.

It is primarily a timber industry.