Gorzów Wielkopolski [ˈgɔʒuf vʲɛlkɔ'pɔlski] ? / i , German Landsberg an der Warthe is a large city in the Polish Lebus Voivodeship . The city is the seat of the voivode , while the government and parliament of Lebus have their seat in Zielona Góra ( Grünberg ).

Landsberg an der Warthe on a map from 1905

The city is located on the Warthe River , around 80 kilometers northeast of Frankfurt (Oder) and 130 kilometers northwest of Posen . Kostrzyn nad Odrą is about 45 kilometers away. Extensive forest areas stretch north and south of the urban area. 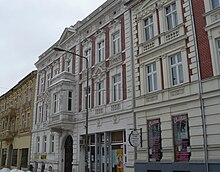 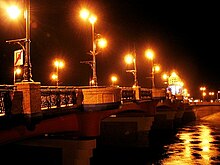 City bus of the MAN brand

There is evidence that the area of ​​what would later become the Landsberg was inhabited at an early stage. After the Great Migration , the Slavs replaced the Germanic tribes who had previously lived here . In the first third of the 13th century, German settlers were recruited by Duke Leszek I to settle what would later become Neumark . With his death in 1227, the Polish central power finally fell into disrepair, which gave the Margrave Brothers the opportunity to expand beyond the Oder. In view of the increasing long-distance trade, Margrave Johann I founded Landsberg in 1257 as a new, more convenient river crossing on the Warthe, just before the previous pass near Zantoch (with steep bank), in order, like this Polish place, to take advantage of the considerable income from long-distance trade (customs, fees from market operations and the right to defeat ) to participate (based on the parallel example of Berlin as a counter-foundation to Köpenick ).

The settlers came from what is now the states of Brandenburg , Lower Saxony and North Rhine-Westphalia and therefore belonged to the Low German-speaking area . The city was given the name Neu-Landsberg (in contrast to Altlandsberg ), which it carried until the 16th century. The Marienkirche was built in the 13th century. In 1321 the city was secured with city walls and gates. In the 14th century Landsberg had developed into the economic center of its surrounding area, the city school is first mentioned in 1360. All suburbs were destroyed during the Thirty Years War . After 1648 Landsberg developed into an important trading center in trade with neighboring Poland. In the 18th century, the establishment of the cloth making trade and the wool trade ensured a further boom.

The city's magistrate was very tolerant of religions. A Jewish cemetery is documented as early as 1713; Instead of the synagogue built in 1752, which had become dilapidated, the community built a new synagogue in the Byzantine style from 1853 to 1854 according to plans by the Berlin architect Carl Tietz .

Landsberg had an old-language grammar school where lessons a. a. was given in Latin , Greek and Hebrew and was connected to real classes and a preschool. A city school in Landsberg is first mentioned in a document in 1360.

In 1892 the city was spun off from the district and received the status of an urban district . However, the administration of the district remained in the city. In the 1920s, the name "Landsberg (Warthe)" caught on. Around 1900 Landsberg an der Warthe had two Protestant churches, a Catholic church and a synagogue .

During the Second World War , Gottfried Benn wrote, among other things, the novel Der Phenotyp (1943) in the " Walter Flex Barracks" . After the Red Army approached at the end of January 1945 , the authorities ordered the city, which was overcrowded with more than 50,000 people, to be evacuated on the morning of January 29 and declared it an “ open city ”. When the Red Army took Landsberg without a fight on the late evening of January 29, 1945, they encountered around 30,000 civilians. In the aftermath, medical care and food, water, electricity and gas collapsed. The residents were exposed to robbery, looting, mass rape and individual shootings. Large parts of the city center burned down as a result of arson and negligence. Most of the residents were sent to labor camps outside of the country for forced labor. The administration of the People's Republic of Poland replaced an administration made up of German anti-fascists by the Soviet military command on March 28th . They renamed the city and in June 1945 drove out the bulk of the population in a few days. The rest followed from December 1945 to May 1947, the last 50 in September 1950. The new urban population that took their place comes mainly from central Poland and mainly from the previous Greater Poland region.

In Landsberg an der Warthe, after the end of the Second World War, the Soviet special camp No. 4 was located in the former “ General von Strantz barracks”, in which thousands of people were imprisoned under very harsh conditions in 1945, many of whom died as a result of their imprisonment.

Number of inhabitants before and after 1945 in graphical representation

The Polish name Gorzów Wielkopolski, which was introduced in modern times, literally translates into German as Greater Poland, mountains .

The origin of the Polish name Gorzów is not clear and can be related to gorzenie (fire) or góra (mountain), such as B. in Gorzów Śląski (German: Landsberg in Oberschlesien). Wielkopolski , on the other hand, means “Greater Poland” or “in Greater Poland”. After the name Gorzów nad Wartą (Gorzów an der Warthe) was initially chosen after the Second World War , the city has been officially called Gorzów Wielkopolski since May 19, 1946 . Formally, the name extension " Wielkopolska " was related to the division of Gorzów into the Poznan Voivodeship on September 25, 1945. A referendum held in the city in 2000 confirmed this name.

Inner-city traffic in Gorzów has been served by electric trams since July 29, 1899. A large part fully coated in World War II replacement of the tram by trolley buses was reversed after the transition of the city on Poland, see tram Gorzow Wielkopolski .

Since December 11, 2016, a daily train on the German regional train line RB 26 has been running from Berlin via Küstrin (Kostrzyn) to Gorzów Wielkopolski. He drives from Gorzów Wielkopolski to Berlin in the morning and back in the evening.

In Christa Wolf's novel » Childhood Pattern « , published in 1976, Landsberg is the scene of the birth, childhood and adolescence of the German girl Nelly Jordan during the Nazi regime, who fled with her parents to a Mecklenburg village during the Second World War and in the 1970s visits the place of youth as an adult. The fictional character Nelly Jordan shows autobiographical traits of the poet Christa Wolf, who visited her hometown Landsberg in the first half of the 1970s.

A parking lot on the federal highway 3 in the Westerwald has been named Landsberg an der Warthe since 1964 to commemorate the expulsion after World War II . The initiative for this came from Hans-Christoph Seebohm .

In the Edward Jancarz Stadium , the local speedway club Stal Gorzów Wielkopolski holds its league races in the Polish Speedway Extra League and has won multiple Polish championships. In addition, the Speedway World Championship Grand Prix of Poland has been held several times in this pure speedway arena with a capacity of 17,000 spectators.

At the head of the city administration is a city ​​president who is directly elected by the population. Since 2014 this is Jacek Wójcicki.

In the 2018 election, Wójcicki again ran his own election committee as city president. The vote brought the following result:

Wójcicki was thus re-elected in the first ballot.