Victor Klemperer (born October 9, 1881 in Landsberg an der Warthe , † February 11, 1960 in Dresden ) was a German literary scholar, Romance philologist and politician. To his awareness of the technical boundaries wore next to his treatise LTI - notebook of a philologist ( L INGUA T ertii I mperii: Language of the Third Reich ) especially his under the title since 1995 I testimony will give away up to the last (1933-1945) published Diaries in which he meticulously documented his everyday experiences under the sign of exclusion as an intellectual Protestant convert of Jewish origin from German society during the Nazi era . In addition, the volumes Curriculum Vitae (1881–1918) , Collecting Life, Not Asking For What and Why (1918–1932) and So Sit Between All Chairs (1945–1959) provide an intensive picture of Klemperer's view of the German era Empire , the Weimar Republic and the German Democratic Republic . Klemperer can thus be regarded as one of the most important chroniclers of the life of a survivor of the Holocaust by the German National Socialists; but also as a contemporary witness of the years before and after the Nazi era. In 1950 he became a member of the People's Chamber of the GDR as a representative of the Kulturbund . 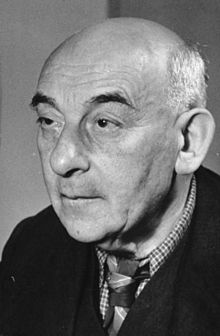 Victor Klemperer on October 2, 1954 as a candidate for the election of the People's Chamber

Victor Klemperer, cousin of the conductor and composer Otto Klemperer and second uncle of the German-American actor Werner Klemperer , was the ninth and youngest child of Wilhelm Klemperer and his wife Henriette, nee. Franke. Victor had three brothers and four sisters:

Klemperer's father was a rabbi initially in Landsberg, Bromberg and later from 1897 in the Jewish reform community in Berlin . The French Gymnasium Berlin left Victor Klemperer not finish to start an apprenticeship, which he, however, did not bring to a conclusion. In 1902 he made up his Abitur in Landsberg an der Warthe and then studied philosophy , Romance languages and German in Munich , Geneva , Paris and Berlin . He finished this course without an exam or doctorate. On May 16, 1906, he married the concert pianist and painter Eva Schlemmer . From 1905 to 1912 he worked as a freelance journalist in Berlin. He resumed his studies in 1912 and converted to Protestantism that same year . He completed his doctorate , a thesis on Friedrich Spielhagen's time novels , in 1912, followed by his habilitation under Karl Vossler in 1914 with a thesis on Montesquieu .

From 1914 to 1915 Klemperer worked as a lecturer at the University of Naples ; in November 1915 he volunteered as a war volunteer . From winter 1915 to March 1916 he was deployed as an artilleryman on the Western Front , and later with the military censorship as an auditor in Kovno and Leipzig . In 1920 he was appointed professor of Romance studies at the Technical University of Dresden .

After the Reich Citizenship Law came into force , Klemperer was transferred from his professorship to early retirement under the leadership of Gauleiter Martin Mutschmann ; Klemperer received the notification with Mutschmann's personal signature on April 30, 1935. From then on, he concentrated on the work on the history of French literature in the 18th century that had begun in July 1933 ; this appeared in two volumes in 1954 and 1966. When the “ valid Jews ” in the sense of the Nuremberg Laws were also banned from access to libraries and from subscribing to newspapers and magazines, he had to stop this scientific work by 1945. He devoted himself all the more intensively to his diaries and began working on his vita in 1938 . During the war years he laid the foundation for his later treatise on the language of the Third Reich, the "LTI" ( Lingua Tertii Imperii ) with his diary entries . Klemperer kept these diary notes as a loose-leaf collection , which he kept at regular intervals through his wife at a friend, the doctor Dr. Annemarie Köhler, in Pirna , had her hidden, as a discovery by the Gestapo would have had fatal consequences during the constant threat of house searches. 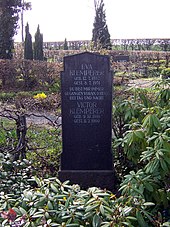 In 1940 he and his wife were expelled from the Klemperer house they had moved into in 1934 in Dölzschen near Dresden; from then on they lived in various “ Jewish houses ” in Dresden. The couple survived the air raids on Dresden in the night of February 13-14, 1945 with minor injuries and escaped deportation on February 16.

“On the evening of February 13, the catastrophe struck Dresden: the bombs fell, the houses fell, the phosphorus poured, the burning beams crashed on Aryan and non-Aryan heads, and the same firestorm tore Jud and Christ to their deaths; but whom of the 70 or so star bearers spared that night, it meant salvation, because in the general chaos he was able to escape the Gestapo. "

As Klemperer later described, he and his wife used the chaos on the night of bombing to tear down the Jewish star. The couple had lost sight of each other that night, but found each other again the following morning. Together they left the burning city to the east in order to make their way to the "Russian front"; the ways there were blocked. First they stayed for a few days with Klemperer's former domestic help Agnes Scholze (Hańža Šołćic) in Piskowitz in Upper Lusatia. After several months of fleeing - under the name changed to "Kleinpeter" with a dot and a "millimeter line" - through Saxony and Bavaria, the Klemperers returned to Dresden in June 1945 and finally to their house in Dölzschen.

The following months, in which Klemperer's professional future remained uncertain, he used to write his book "LTI", which appeared in 1947. Klemperer decided against moving to one of the western zones ; he stayed in the Soviet occupation zone and was involved in building up the GDR . Eva and Victor Klemperer joined the KPD after a short period of hesitation and were soon included in the broadest sense of the political elite in Dresden, even if Klemperer was not uncritical about Marxism.

In 1945 Klemperer was able to return to the TH Dresden as a professor. In 1946 he was the first director of the Dresden Adult Education Center. From 1947 to 1960 Klemperer worked at the Ernst Moritz Arndt University of Greifswald , the Martin Luther University of Halle-Wittenberg and, most recently, at the Humboldt University in Berlin . Among his well-known academic students here were Rita Schober , who also became his successor, as well as the Romanists Horst Heintze , Johannes Klare and Hans-Otto Dill .

After the Volkskammer election on October 15, 1950 , he moved into the Volkskammer as a member of the Kulturbund of the GDR , to which he belonged until 1958. In 1950 he became a full member of the Academy of Sciences and tried to give the French language an appropriate position in the GDR.

After the death of Eva Klemperer (1882–1951), Klemperer married Hadwig Kirchner , 45 years his junior, in May 1952 , who worked on the publication of his diaries after his death. Victor Klemperer died on February 11, 1960 at the age of 78. His grave is in the Dölzschen cemetery . Hadwig Klemperer died in Dresden in 2010. 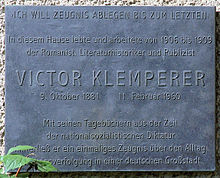 Berlin memorial plaque on the house, Dorotheenstrasse 1, in Berlin-Mitte

At the TU Dresden there is a hall in the building complex of the Saxon State and University Library Dresden (SLUB), Zellescher Weg 18, after him, the Dresden banker Victor Klemperer von Klemenau and his father Gustav Klemperer (1852–1926), director of the Dresdner Bank and honorary senator of TUD named.

In the detailed diary, Klemperer shows himself to be a precise and critical, but also a self-critical observer of his time and his milieu. During the time of the Weimar Republic, Klemperer's observations mainly concerned his academic career and the countless intrigues at the university, such as the competition with Ernst Robert Curtius . He also wrote a lot about the relationship with his first, often sickly wife, Eva, described people and landscapes, and also busily noted the frequent visits to the cinema. He carefully followed his own health and the progress of his scientific writing. He was often haunted by self-doubt. Klemperer spoke out openly about the problems of his existence as a converted Jew and noted the anti-Semitism that was rampant after the collapse of the German Empire in connection with the stab in the back and the turmoil surrounding the Bavarian Soviet Republic .

From 1933 onwards one can see how Klemperer was slowly and systematically ostracized, first in science and later in private life. His diaries from the time of National Socialism are testimony to an atmosphere of great and ever increasing fear in which Klemperer and the other residents of the "Jewish House" lived: above all, fear of the Gestapo . Against this background, he reported on numerous suicides and victims of the genocide of the Jews by the National Socialists in his personal environment. In contrast to the frequent notes on anti-Semitic utterances during the Weimar Republic, Klemperer's diary noted an increasing courtesy of the non-Jewish population towards the Jews stigmatized by the yellow star, despite or because of the official anti-Semitic policy - a courtesy that had no consequences with regard to the extermination policy.

The diaries were published by Aufbau-Verlag from 1995 and became a bestseller . The diaries from 1933 to 1945 are considered to be an important document of contemporary history and are standard works for history lessons and German lessons. The diaries from the Weimar Republic and from the period after 1945 also show Klemperer in the role of an observer who does not shy away from critically addressing one's own ambition or the “lingua quarti imperii” (LQI - the jargon of the new communist rulers) . In 2007, an unabridged and extensively commented version of the diaries from 1933 to 1945 appeared on CD-ROM .

Publications during his lifetime

The diaries were edited for radio by Klaus Schlesinger from 1996–1999 and produced and broadcast by DeutschlandRadio Berlin and SFB / ORB under the direction of Peter Groeger with Udo Samel as Klemperer. The audio books are also available on CD .