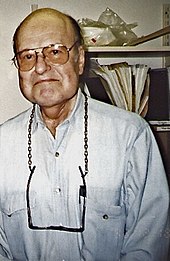 Werner Klemperer was born in 1920 as the son of the famous conductor Otto Klemperer and the singer Johanna Geisler . He grew up in Cologne, Wiesbaden and Berlin. Because he was the son of a Jewish father, his family fled the Nazi threat to the United States in 1935 . He was a relative of the Romance studies and writer Victor Klemperer , who became known through his diaries and his LTI language analysis .

From 1942 to 1945 he served as a soldier in the US Army. After the Second World War , Klemperer became an American citizen and turned to acting . From 1951 he appeared in numerous US television series . In 1959 he played Emil Hahn in the TV version and then in 1961 in the feature film The Judgment of Nuremberg . Director and producer Stanley Kramer cast him in 1965 as 3rd officer ("Lieutenant") Huebner in The Ship of Fools .

Klemperer had his most famous role in the television series A Cage Full of Heroes . From 1965 to 1971 he played the bumbling "Colonel Wilhelm Klink", who, as the commander of a German prisoner-of-war camp, is constantly being fooled by the highest-ranking prisoner officer. Due to his own biography, Klemperer had only accepted the role on the condition that as a German commander he would never triumph over his opponent. In order to be able to represent the figure more authentically, he again appropriated a German accent. Klemperer was nominated for an Emmy five times for his performance, winning the award in 1968 and 1969.

After the series ended, Klemperer, who was an excellent pianist and violinist, increasingly turned to classical music. He has appeared as a speaker for many famous symphony orchestras. He was particularly well known as the narrator of the musical fairy tale Peter and the Wolf von Prokofjew and as the speaker of the melodrama in Arnold Schönberg's Gurre-Lieder .

In 1993 Klemperer made a guest appearance in the animated series The Simpsons . In the episode Homer Loves Mindy , he dubbed the character of Colonel Klink, based on his role from A Cage Full of Heroes , who supports Homer several times as an advisory spirit.

Werner Klemperer died at his home in New York on 6 December 2000 of cancer .