Altlandsberg ( pronunciation ? / I ) is a small town in the state of Brandenburg , district of Märkisch-Oderland .

The city is located east of Berlin in the so-called “closer interdependence” of the federal capital.

The town of Altlandsberg is divided into six districts, each with their own local councils and local mayors :

There are also seven inhabited parts of the municipality without local self-government:

Altlandsberg's origin was a first Slavic, then German castle town called Jabel , which was surrounded by water and swamp and was therefore naturally protected. It was on a trade route from the Spree to the lower Oder . The "Jabelwiesen" to the west of the Altlandsberger Fließ still remind us of this today. Altlandsberg was first mentioned in a document in 1300 with the personal name Johannes de Landesberg . The name of the city could have been transferred from the Wettin Landsberg near Halle. At the beginning of the 13th century, a German (perhaps Wettin) castle was built with suburbium around the current town church. Altlandsberg very likely belonged to the Wettin rule, which the Margrave of Meissen Henry the Illustrious wanted to build up around Hönow in the course of the German state expansion to the east against the interests of the Ascanian margraves of Brandenburg. In the Teltow War between 1239 and 1245, the ruling Ascanians Johann I and Otto III decided. the arguments for themselves. Since 1245 the entire Barnim (as well as the Teltow ) and thus also Altlandsberg belong permanently to the Mark Brandenburg or Brandenburg. To the south of the castle, the Ascanians built a regular city complex before 1257. In the 14th century the city complex was fortified with a city wall. In 1335, the Wittelsbach Margrave Ludwig founded a monastery for the mendicant order of the Servites , the only monastery foundation for this order in the march. Altlandsberg sank to a minority around 1400 . In 1409 the town came into the possession of the Knights of Krummensee . In 1421, Elector Friedrich von Brandenburg granted the citizens the right to hold annual markets. On April 24 or 25, 1432, the Hussites raided the city and burned it down. The coin treasure of almost 7,500 coins from Altlandsberg , which was discovered in the Schlossviertel in 2016, probably dates from this period . In 1537 a big fire destroyed the town hall and all the documents. The monastery was dissolved with the Reformation in 1540. In 1550, 1566 and 1598 plague epidemics raged in the city.

In the Thirty Years' War Altlandsberg burned down in 1632 and remained devastated. In 1654 the electoral minister, Count Otto von Schwerin, acquired the castle and the burned down town. He had it rebuilt and the baroque palace and the associated hall church built around 1670. The Prussian King Friedrich I spent his youth here. As a reformed landlord, Otto von Schwerin settled the first refugees ( Huguenots ) in Brandenburg here in 1670 , but they moved to Berlin in 1672 to the French colony there, which was privileged in 1661. In 1684 another city fire destroyed 90 percent of the city.

In autumn 2007, during construction work south of the old town, archaeological structures and a previously unknown cemetery were uncovered. A total of 79 graves were found in the area of ​​the construction project. The burials are safe in the 17th and 18th centuries due to the remains of broken fragments, costumes and furnishings as well as the wooden coffins used. Date to the 16th century. This cemetery was laid out before 1625 and was given up again with the construction of the new cemetery in 1817. The traditional name “poor cemetery” shows that while the cemetery next to the parish church was still occupied in the 17th century, there must have been a certain social gradient within the city's population. Epidemics and war as a trigger for poverty were an important topic in Altlandsberg at this time. Large parts of the population were impoverished, especially in the course of and as a result of the Thirty Years' War. 61 skeletons were examined by the anthropologist Bettina Jungklaus and the medieval archaeologist Blandine Wittkopp . Among the buried there was a small proportion of children of 18% and a high proportion of people over 50 years of age. That was a low child mortality rate for a pre-industrial population. As a sign of advanced age, toothless teeth, the so-called old jaws, were found in some individuals. Widows, the sick and the crippled were particularly at risk of poverty. Accordingly, almost twice as many women as men were found. Overall, traces of deficiency diseases were not very common. The exposure to dental caries was very high with 83% of affected teeth. That indicated a predominantly vegetable diet. Inflammatory and degenerative diseases in around three-quarters of the vertebrae and hip joints indicate a high level of physical strain.

In 1708, King Friedrich I bought the Altlandsberg estate, converted it into a royal office and expanded the palace as a three-wing baroque building into a secondary residence. After the death of Friedrich I, his son Friedrich Wilhelm I gave up the palace as a residence in 1713 and had the furnishings removed. It burned down in 1757 and was demolished except for the hall church, which was rebuilt between 1765 and 1768. In 1854 the last major fire raged in the city.

For centuries, the city's economic life was shaped by agriculture, forestry and handicrafts. In the guilds founded around 400 years ago, the cloth makers, shoemakers / tanners, bakers, butchers / bone-makers and wheelwright / cooper were the most important trades. Only with the expansion of the Chaussee Berlin - Strausberg - Prötzel in 1850 and the connection to the Altlandsberger Kleinbahn in 1898 did the city experience a small economic boom.

On April 21, 1945, leading Red Army units under Nikolai Bersarin, coming from Strausberg , reached the Berlin city limits via Altlandsberg, which lay behind the outer barrier ring around the Reich capital Berlin . The Ulbricht group was based in what is now the Bruchmühle district from May 1 to 8, 1945. Altlandsberg was largely spared from war damage.

Altlandsberg has belonged to the Niederbarnim district in the province of Brandenburg since 1817 and to the Strausberg district from 1952 (until 1990 in the GDR district of Frankfurt (Oder) , 1990–1993 in the state of Brandenburg ). Since the district reform in 1993 , the city has been in the Märkisch-Oderland district .

The city council of Altlandsberg consists of 18 city councilors and the full-time mayor. As a result of the local elections on May 26, 2019, the city parliament is composed as follows:

In 1993, the Indian doctor Ravindra Gujjula was elected as the first dark-skinned mayor of Germany.

Arno Jaeschke was confirmed in the mayoral election on June 14, 2015 with 56.8 percent of the valid votes for another eight years.

Blazon : “In red over a green shield base with a silver beam, a pointed silver tower with a black window and four open niches; on the top of the tower a square tower (a stylized stork's nest). "

Partnership and friendship between cities

A partnership with the municipality of Krzeszyce in Poland has existed since August 2002 . 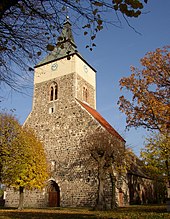 Altlandsberg is a member of the “Cities with Historic Town Centers” working group of the state of Brandenburg. The city center is made up of ramparts and ditches as well as a largely preserved field stone city wall 1.3 kilometers in length with the Berlin gate tower and the Strausberger gate tower (stork tower ) from the 14th / 15th centuries. Century. It is dominated by buildings from the 18th and 19th centuries, including many former arable houses, and has been extensively renovated since 1991.