Waldsieversdorf is a municipality in the Märkisch-Oderland district in Brandenburg and a state-approved resort . It belongs to the Office Märkische Schweiz , which has its administrative seat in the city of Buckow .

The place is in the middle of the nature park Märkische Schweiz approx. 2 km from Buckow (Märkische Schweiz) . Waldsieversdorf is a popular excursion destination due to its area rich in forests and lakes. On the outskirts is the Great Däbersee , which is used for swimming, fishing and rowing boat trips. The place is traversed by the stobber .

The Moorhof residential area belongs to the community .

The area of ​​Märkische Schweiz was already settled in the Bronze Age by Teutons from the Jastorf culture , who migrated in the 5th century. During excavations, a shaft ax with a weight of around 5 kg was found in a field at the Geschehof and another stone ax in the building site of a house in the colony, which dates from 2000 to 1700 BC. Could be dated. From the 7th to the 9th century there was a people's castle (" Schwedenschanze ") of the Slavs who had lived here since the end of the 6th century . Several millstones , awls made from bones , an iron sickle and ceramic remains were found there. With the help of shards from the Kleiner Däbersee, vessels of the settlement could be reproduced. In addition to the Volksburg, however, the area around it must have already been inhabited, which was proven by the discovery of a granite hand mill when a mansion was excavated .

In 1253 villam Sifiridisdorp and Buckow were first mentioned in a deed of ownership from the Archbishop of Magdeburg . With the document dated April 18, 1253, the Zinna monastery received several places to replace Müncheberg , which the Cistercians had to surrender. 1348 received the settlement at the behest of Ludwig VI. the connection to the connection from Seelow to Berlin . In the meantime it has been proven from soil finds that the settlement extended from the plain south of the Stöbbers to the later manor house on the Eberswalder Chaussee. In 1405 it came into the possession of a Poppo von Holzendorf , who sold it to Kuno von Ziegesar in 1416 . On April 17, 1432 the place was burned down by the Hussites on their way to Bernau . Five years later, another document mentioned the priest's mill for the first time ("Syferstorffsche mole gnannt, located on the Stobberow"). Its name is derived from two former preachers Willichus and Jüterbock , who once owned the mill. On 24 June 1463 a done lending of "Seuerstorf" of Frederick II. To the wife of Jost von Ziegesar. In 1534 Wolff v. Monastery below the priest mill a cutting mill. His widow, Elisabeth von Bardeleben , established a Wittum there in 1595 .

In 1624 the "Sieversdorf Desert" came into the possession of Kurt von Steinkeller . In the Thirty Years War , the Sieversdorf desert was sacked by imperial Croats in 1628. 1641 existed a Vorwerk and a sheep while the pitcher desolate lay. The Geschehof was mentioned for the first time in a document dated March 25, 1662. Leonhard Ruhlen received the "house on the Sieversdorf Fliess" from Georg Adam von Pfuhl ; he owned Gut Sieversdorf, along with the villages of Buckow, Obersdorf, Möschen, Garzin, Hasenholz, Damsdorf and Münchehofe. In 1688 the settlement including the sheep farm came into the possession of his son-in-law Heino Heinrich von Flemming . In 1788 the chief bailiff of the office Chorin Philipp Heinrich Karbe bought the Flemmingsche Rittergut for 50,000 thalers.

The forest cemetery was inaugurated on May 13, 1824. Around 1835 it was connected to Poststrasse, which leads from Müncheberg via Prötzel to Eberswalde . The Chausseehaus was built around five years later. During this time, the post mileage column was also set up. Since April 14, 1856, the Sieversdorf desert was administered as an independent municipality. In the days from September 17th to 22nd, 1863, the region was the scene of a royal maneuver that was carried out under the direction of Wilhelm I. On May 9, 1868, the Vorwerk burned down with the exception of a few outbuildings and was rebuilt that same year. In 1878 the road to Buckow was paved . A tax collection from 1880 showed 34 houses.

In 1889, the manufacturer Ferdinand Kindermann acquired the priest mill in the Sieversdorf desert along with 250 acres of land and founded a villa colony on this area from 1895, which was connected to Müncheberg and Buckow by a small railway in 1897 . Some of the old villas are still preserved today, for example the tower villa on Seestrasse from 1905, Kindermann's first house. The same applies to the Waldsieversdorf sanatorium . He is considered the founder of the colony and thus also the founder of Waldsieversdorf.

In 1905 Georg Hansen became the first mayor of Desert-Sieversdorf. He held this position until 1936, after which he was appointed the first former mayor of the Lebus district. At that time there were 268 inhabitants in the village. A year later, led by Pastor Hemmerling the first pastor who now independent parish . On January 26, 1907, the place was renamed Wald-Sieversdorf at Kindermann's request. A year later, the Waldsieversdorfer school was built and the volunteer fire brigade was founded . In 1910 the manor house of the von Flemmings was built on Ebenswalder Chaussee. In 1922 a chapel was inaugurated , which previously served as a sheepfold. In 1925 there were already 621 inhabitants. On May 13, 1933, the war memorial was inaugurated for those who fell from the First World War . In the era of National Socialism , the sanatorium served as Reich leaders school the female labor service. The population continued to grow and in 1939 was 776 citizens. There were also spa guests and weekend travelers who were looked after by a specially founded tourist office. But in the following years this place was not spared the effects of the Second World War . The place was cleared on April 18, 1945; many residents committed suicide by setting fire to their houses or drowning themselves in the Däbersee. On April 21, 1945, the Red Army marched into the town. Due to the Second World War, the 50th anniversary could not be celebrated in 1945. Rather, the number of inhabitants rose sharply when more than 100 resettlers came to Wald-Sieversdorf in 1946. During the land reform , von Flemming's property with a total area of ​​2867 hectares was expropriated ; 250 hectares were given to new farmers . Their settlement houses at the level crossing from 1947 and 1948 were rebuilt in 1952 and 1953 and from then on they were used as a children's home for girls.

The Rote Luch , west of Waldsieversdorf, was from 1953 the main station for the 14th Intelligence Regiment (NR-14) and the 14th Chemical Defense Company of the NVA air force . With the decommissioning of the NVA in 1990, the company was dissolved. The NR-14 was transferred to the 5th Air Force Division of the Bundeswehr , renamed Telecommunications Department 14 and disbanded in 1993.

In 1949 the NDPD occupied the Waldsieversdorf sanatorium and set up its central party school there. In 1954 the eight-class central school was established. A year later the public baths opened at the Großer Däbersee. In that year, the stop of the small train was replaced by a massive building with a waiting hall and a ticket office. In 1964, when the community now had 1,144 inhabitants, the parish was able to build a celebration hall at the cemetery - keeping corpses in the fire station was a thing of the past. In July 1978, the first hunters festival was celebrated, establishing a tradition that will continue into the 21st century. After the fall of the Wall , in 1993 the memorial for the victims of fascism was redesigned into a memorial for the victims of the war. One year later, the laying of a natural gas pipeline began, and another year later, the expansion of the sewage and telephone network. The Kindermann villa colony celebrated its 100th anniversary on September 4, 1995. At this time, the community also received the local coat of arms, which is still valid today, a gift from Franz Heinze . Tourism, which initially declined after the fall of the Wall, gradually recovered. It received a further boost after Waldsieversdorf received the “State Recognized Resort” award on January 6, 1996. In the same year the village reached the 4th place in the competition of the district "Our village should be more beautiful". In the following years, the water tower was renovated and inaugurated on July 24, 1998.

The school existed until 2000 - the last day of school was July 19, 2000. Since 2010 it has been used as the town's cultural, exhibition and tourism center. In September 2001, the preliminary expansion of the road network was completed. The Jägerfest celebrated its 25th anniversary on July 25, 2002. One year later, on April 12, 2003, the Lindenplatz at the old sawmill was inaugurated. In the same year, the “Victims of Wars” memorial was inaugurated; Waldsieversdorf celebrated its 750th anniversary on July 23, 2003 with a festive event. In 2007 the water treading area was opened in Stöbber. On June 19, 2008, the community unveiled a boulder that reminds us of Kindermann. In addition, the war cemetery was redesigned in the cemetery. In 2009 the old waterworks, the Margaret spring and the water tower were confirmed as technical monuments. The John Heartfield House opened on July 4, 2010 and has shown a permanent exhibition by the artist ever since.

The community council consists of 10 community representatives and the honorary mayor.

In the mayoral election on May 26, 2019, Ehm was elected unopposed candidate with 81.2% of the valid votes for a further term of five years.

Blazon : "In green on a golden ground, a red-funded and red-tinned silver tower with a black door and black arched windows, each with a golden linden leaf." 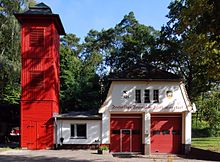 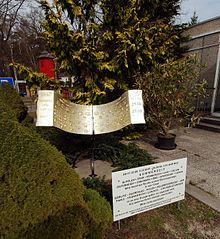 Sundial , handicraft by the blacksmith Richard Jahn from 1979

The Jägerfest, which has been taking place every year since 1978, is organized by the community on the last weekend in July from Thursday to Sunday. There is also a maypole singing, a fountain concert , a 4-lake triathlon , a serenade concert in the forest and an autumn and Christmas party.

The federal highway 168 between Prötzel and Müncheberg crosses the municipality.

Waldsieversdorf station is on the Buckower Kleinbahn . Regular passenger traffic was discontinued in 1998. The line has been operated as a museum railway since 2002 .