The title of this article is ambiguous. Further meanings are listed under Lebus (disambiguation) .

Lebus ( ləˈbu: s ) is an official small town in the southeast of the Märkisch-Oderland district in Brandenburg . The city is the seat of the administration of the Lebus Office .

According to its main statute, the city of Lebus consists of the inhabited districts

Districts within the meaning of § 45 ff. Of the municipal constitution of the state of Brandenburg are Mallnow, Schönfließ and Wulkow. Elisenberg, Elisenheim, Lindenhof, Unterkrug and Wilhelmshof are designated as living spaces.

Lebus was a Polish diocese and town founded on the left bank of the Oder, which was eventually subject to the German rival Frankfurt .

Until Frankfurt (Oder) was founded in 1253, Lebus was the undisputed center of the Lebus countryside of the same name . The city lies on a ridge 500 m long and 50-100 m wide, which also bears the remains of old fortifications and is divided into the Turmberg, the Schlossberg and the Pletschenberg by transverse channels. These are already referred to as upper, middle and lower castle in a partition treaty from 1249.

After the Germanic tribes left in the migration , a new fortification was made by the immigrating Slavs by the beginning of the 9th century at the latest . The main castle of the Leubuzzi tribe , the easternmost tribe of the Wilzen , who settled to the left and right of the Oder and were to give this country their name , was probably built here . Since then the name of the castle has been passed down as Lubus , Lebuz or Lebus . It is believed that the name can be traced back to that of the Wilzen prince Liubus, who had suzerainty over the Wilzen tribes at the beginning of the 9th century. Around 925 the castle was probably destroyed again by disputes within the tribe.

Before the year 1000 Lebus was rebuilt and reinforced by the Polish ruler Mieszko I or his son Bolesław Chrobry . From then on Lebus belonged to the Piast state for two and a half centuries and exercised a dominant role over the traffic routes that crossed here, as the best ford of the Oder by far was located here.

Bolesław III. Schiefmund founded the Diocese of Lebus in 1125 , which was a suffragan of the Archdiocese of Gniezno . The seat of the diocese was Lebus, which received a cathedral church. It was dedicated to Saint Adalbert of Prague and was probably located on Castle Hill. Saint Adalbert stood for the pagan mission of the Piast state, for which the diocese was obviously intended.

Since 1138 Lebus was in the possession of the Silesian Piasts and through the policy of Henry I “the Bearded” temporarily came to Greater Poland . Heinrich I also granted the town town charter in 1226 or earlier. The castle was probably destroyed during the fighting that followed. When Mieszko , the son of Henry II “the pious”, died in 1241 or 1242 , he was not buried in the grave church of the dynasty in the Leubus monastery , but in St. Peter's Church below the castle.

In the middle of the 13th century, Ascanians took control of Lebus as Margraves of Brandenburg , ruled it from 1249/50 as a condominium together with the Archbishop of Magdeburg and had been the sole masters of the castle and of Lebus from 1287. However, they hardly supported the city anymore, but instead founded the city of Frankfurt in competition with it in 1253 , which quickly made Lebus insignificant and in 1354 fell to the bishop. The bishopric, in turn, was relocated to Göritz (Oder) (today Górzyca ) as early as 1276 ; in the 14th century, St. Peter's Church with the grave of Henry II below Lebus Castle served as the cathedral church. In 1373 the seat of the bishop went to Fürstenwalde / Spree with the seat of the bishop , even if the diocese kept the name Lebus until the secularization . After the battle of Müllrose on April 10, 1432, Lebus, which had already been greatly reduced in importance, was plundered and completely destroyed on April 14 by a division of the Hussite army of approx .

In 1555 the diocese was secularized . Since then the castle also fell into disrepair, in 1589 and 1631 most of the buildings burned down, and in 1713 the last fixed towers as well. In 1765 the remains were removed. The settlement has also had a village character since the 18th century. 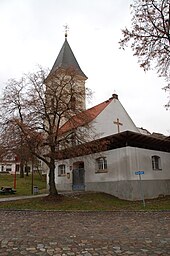 The term “Lubusz Land” lives on to this day in the name of the neighboring Polish Voivodeship of Lubusz (województwo lubuskie) .

Towards the end of the Second World War in 1945, Lebus was almost completely destroyed in the fighting in the course of the Battle of the Seelow Heights and rebuilt in the 1950s / 1960s. Among other things, the Volkssturm battalion 7/108 “ Franconia ” was deployed in the spring of 1945 on the Oder front between Frankfurt (Oder), which was declared a fortress , and the city of Lebus.

Until about the mid-1970s there was a research center of the Academy of Sciences of the GDR on the Burgberg. The prehistorian Wilhelm Unverzagt had already carried out scientific excavations from 1938 to 1943 as director of the Berlin Museum for Prehistory and Early History on Burgberg and other castle walls such as Lossow , Reitwein or Zantoch . He pushed this further with the research center.

On June 27, 1977 a misdirected bath express train of the Reichsbahn and a freight train collided in the railway accident in Lebus . The accident killed 29 people.

In August 2003, the largest Late Bronze Age find was made in the Oder region in Lebus. The bronze port from Lebus Castle Hill is shown to the public in the Brandenburg State Archaeological Museum in Brandenburg an der Havel . More than 100 bronze axes of different categories and origins have been secured.

During excavations on the castle hill in October 2009, surprisingly, a grave with four people buried at the same time was found just a few meters south of the cathedral. A reference to the cathedral cemetery could be ruled out, as traces of settlement were found between the cathedral and the grave. However, there was a reference to a former defensive border, which was indicated by an accumulation of crossbow bolts and an older section trench. Late Slavic and early German ceramics as well as weapon accessories and a traditional costume were recovered from the grave itself. The four young men all had unhealed cuts to the skulls from edged weapons; two of the injuries were certain to be fatal. Therefore, it could be concluded with great certainty that the individuals died in a fight. Due to the recovered finds, the burial was narrowed down to the period around 1200 to the first half of the 13th century. By carefully examining the scenes of the conflict in Lebus described in the sources, the death could be linked to the attack by Archbishop Willbrand of Magdeburg in 1239, during which the cathedral was probably also destroyed.

On January 22nd, 2016, a treasure trove of around 2300 silver coins was presented in the “Haus Lebuser Land” museum of the city .

On February 1, 1974 the former community of desert Kunersdorf was incorporated. On December 31, 1998, Schönfließ became a district of Lebus. On December 31, 2001 Mallnow and Wulkow followed at Boossen.

The city ​​council of the city of Lebus consists of 16 city councilors and the honorary mayor. The local election on May 26, 2019 led to the following result with a turnout of 68.8%:

Herbert Radtke resigned from his position on May 31, 2016. Britta Fabig (Citizen for Lebus) was elected as his successor on June 16, 2016 for the remaining legislative period until 2019. Fabig and her deputy Nickel resigned from their mandates in October 2017.

On November 10, 2017, the city council elected Detlev Frye from the AfD as the new mayor. The fact that representatives of the parliamentary groups of the CDU and the left voted for him led to resentment in their regional associations. Frye, on the other hand, emphasized that you don't choose your party, you choose him as a person. In retrospect, the city council's vote was declared invalid because it was not on the agenda and the vote to include this election on the agenda violates the electoral law. Therefore, the oldest member of the city council, Joachim Naumann, was temporarily appointed mayor. At another election date on November 23, 2017, no mayor was elected because too few city councilors had turned up. On March 22, 2018, Peter Heinl was elected mayor by the city council.

The coat of arms has been handed down for the 15th century, was revised by the heraldist Uwe Reipert and approved in this form on May 3, 2000.

Blazon : "In blue on green ground, a leaping golden wolf with a silver lamb in its throat."

War cemetery for the victims of the Second World War

The Protestant town church “Sankt Marien” was built in 1806 in the classical style as a replacement for the burnt down medieval building. The church, which was badly damaged at the end of the Second World War, was reduced in size and rebuilt after 1945.

Lebuser Land house at Schulstrasse 7 with a permanent exhibition on the history of the country of Lebus, the diocese of Lebus and the city of Lebus

Worth mentioning are the Burgberg, the Schlossberg and the Turmberg, a 550-meter-long and up to 100-meter-wide ridge, which was developed as a fortification around the year 1000 and was considered an almost impregnable fortress in prehistoric times. In the "Oderberge" nature reserve, which has existed since 1967, there are large occurrences of Adonis roses , rare dry grass plants, insects, birds and small reptiles.

At the jetty of the Oder

Lebus can be reached with the buses of Busverkehr Märkisch-Oderland GmbH (BMO). Lines 968 and 969 connect to Frankfurt (Oder) and Seelow.

The Oder-Neisse cycle path leads through the Unterkrug, past the riding stables, over the Kietzer Berg towards the old town . Cyclists and visitors will find restaurants and various accommodations here.

The sporting life is organized by the club Blau-Weiß Lebus, founded in 1990, which offers not only soccer, but also skating , equestrian sports, volleyball and table tennis.