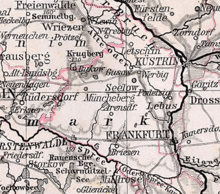 The district of Lebus , until 1939 district Lebus , until the 19th century also called Lebuser district , was a district in Brandenburg until 1950 . It existed in Prussia , in the Soviet occupation zone and in the GDR . On January 1, 1945, the district comprised the six towns of Buckow , Fürstenwalde (Spree) , Lebus , Müllrose , Müncheberg and Seelow , 110 other communities and four forest estate districts .

Today, the former district is largely part of the Märkisch-Oderland and Oder-Spree districts . A small part of the original district , east of the Oder , with the municipalities of Neu Lebus and Tirpitz , was placed under Polish administration by the Soviet Union in 1945 and has since been located in the Powiat Słubicki of the Polish Lebus Voivodeship .

The land of Lebus has been mentioned in documents since the 13th century ; it probably existed several centuries earlier. The area corresponded roughly to that of the later Lebus district, possibly a little further south to over the Schlaube, and to the east of the Oder that of the later Sternberg district .

The offices of Lebus and Fürstenwalde were formed in the 16th century,

In the 17th century the Lebusische Kreis was established in the Mark Brandenburg.

Lebus district in the 19th century

The district office of the Lebus district was initially located outside the district area in the city of Frankfurt an der Oder.

Since July 1, 1867, the district belonged to the North German Confederation and from January 1, 1871 to the German Empire . On September 30, 1929, a territorial reform took place in the Lebus district in line with developments in the rest of the Free State of Prussia , in which all manor districts except four were dissolved and assigned to neighboring rural communities. As of January 1, 1939, the district of Lebus was named Landkreis in accordance with the now uniform rule . On May 17, 1939, the communities Güldendorf , Kliestow , Lichtenberg , Markendorf and Rosengarten left the district and became the city of Frankfurt a. Incorporated.

In spring 1945 the district was occupied by the Red Army after heavy fighting over the Seelow Heights .

After May 8, 1945, the district largely belonged to the Soviet occupation zone . The communities of Neu Lebus and Tirpitz , located opposite the city of Lebus on the eastern bank of the Oder, were placed under Polish administration by the Soviet Union in the spring of 1945 . Subsequently, the local Polish administrative authorities expelled the local population from this part of the district .

With effect from March 15, 1946, by resolution of the presidium of the provincial administration of Mark Brandenburg, the municipalities of Bleyen and Küstrin-Kietz , located on the left bank of the Oder, of the dissolved district of Königsberg Nm. to the district of Lebus. The law on the amendment to improve the district and municipal boundaries of April 28, 1950 resulted in a number of territorial changes on July 1, 1950:

In 1952 there was another comprehensive regional reform in the GDR : 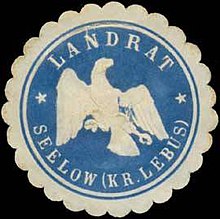 In 1945 the following cities and communities belonged to the district of Lebus:

The Neuhardenberg community was renamed Marxwalde on February 19, 1949 in honor of Karl Marx and was given its traditional name back in 1990.

Administrative districts and counties in the Prussian province of Brandenburg