Briesen (Mark) is an official municipality southeast of Berlin in the Oder-Spree district in Brandenburg . It is administered by the Office Odervorland .

At the northern end of the village, the 10 km long Madlitz-Falkenhagener lake area extends .

The place is on the old trade route between Berlin and Frankfurt (Oder) , which favored the development of craft and industry.

The districts of Alt Madlitz , Biegen , Briesen (Mark), Falkenberg and Wilmersdorf belong to the municipality of Briesen (Mark) . Accommodation places are:

Slavs are said to have settled the area around Briesen as early as 600 - a village complex from this period was discovered during the construction of today's A 12 motorway . Several sites in the surrounding forest are registered as soil monuments.

The earliest mention of Briesen comes from 1403. In 1495 the local knights sold the village and its residents to the wealthy Carthusian monastery in Frankfurt (Oder) . Elector Joachim II of Brandenburg used the income from the village to maintain his University of Frankfurt , which was founded in 1506 , after he had taken a number of lands from the monastery.

In 1842 the Lower Silesian-Märkische Railway was opened between Berlin and Frankfurt (Oder), from then on Briesen was an important focal point for the surrounding towns. A serious railway accident occurred here on November 1, 1918 , when a military train drove into the stopped wagons of a freight train .

After 1945, the rural atmosphere became more pronounced again, and the inhabitants reflected on their natural surroundings.

Not far from the Kersdorfer Schleuse, in today's "Forsthaus an der Spree", the Ministry for State Security (MfS) operated the "Object 74" from 1969 in what was then the "Forsthaus An der Flut". Stasi officers trained the RAF terrorists Henning Beer and Christian Klar on bazookas in the forester's house . In addition, ten dropouts from the RAF and the 2nd June Movement, such as RAF members Silke Maier-Witt and Susanne Albrecht , who with the help of the MfS moved to the GDR from 1980 , are said to have been prepared for their life in the GDR in the forester's house .

On July 1, 1950, the previously independent municipality of Kersdorf was incorporated. Bending followed on December 31, 2002. Madlitz-Wilmersdorf was added on January 1, 2014.

The significant increase in the number of inhabitants in 2002 and 2014 is the result of the incorporation of Biegen and Madlitz-Wilmersdorf.

The Briesen community council consists of 16 community representatives and the honorary mayor. The local election on May 26, 2019 resulted in the following distribution of seats:

Blazon : “Divided by an angle to the base of the shield ; above, in silver, a red looking deer head, the antlers of which are surrounded by a green birch leaf; blue wavy bottom. " 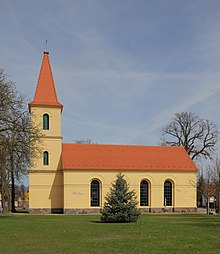 Briesen is on the L 38 state road from Fürstenwalde to Treplin ( federal road 5 ). The closest motorway junction is Briesen on the A 12 .

The Kersdorf lock is located southeast of Briesen, about 4 kilometers from the end of the town . Built in 1888, it connects the Spree in the direction of Berlin with the Oder-Spree Canal , an important artery to the inland waterways of Eastern Europe. It consists of two lock chambers 57 and 67 meters long. The north chamber was extended to 115 meters from 2010 to 2013 for around 14 million euros.

The Martin Andersen Nexö School was inaugurated on October 21, 1956, but lessons had already started the month before. There was previously an allotment garden at the site of the school . The school is named after the Danish poet Martin Andersen Nexø .