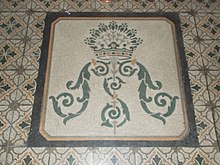 In 1233 seven merchants founded the Ordo Servorum Mariae in Florence . On the day of the Feast of the Epiphany in 1234, two of them began to beg for the Order in the streets of Florence. The merchants known within the order as the Seven Holy Fathers established their first monastery in 1241. In 1249 they received the first recognition from the papal legate for Tuscany. St. Philipp Benizi († 1285) is considered to be the second founder, as he completely revised the statutes and founded the female branch. Since 1299 there was also a religious province in Germany. Pope Benedict XI issued a papal confirmation . 1304 the order in its bull Dum levamus . At the time of the Reformation, all 17 German monasteries were dissolved, and at the same time religious life began to flourish in Italy. A well-known religious at this time was Paolo Sarpi .

In the 17th century the order expanded to France and Spain. In 1613 a monastery in the German-speaking area was founded again in Innsbruck (today's Innsbruck Servitenkirche ). In 1639 the monastery was founded in the imperial city of Vienna . In the beginning there was only a modest wooden chapel. In 1651 the foundation stone for today's Servitenkirche was laid. The present monastery was mostly built after the second Turkish siege of Vienna (1683). From Innsbruck another 26 monasteries were founded in the area of ​​the Danube Monarchy .

The order was re-established in Germany in 1637, when the Kreuzberg monastery near Bonn was founded by the brothers of the German Observance. In 1714 the Rheinbach monastery was built . With the French Revolution, the order experienced a setback. Due to the secularization , the order lost its monasteries in Germany.

The second decline of the order was stopped by the Prior General Father Albuin Patscheider. At the end of the 19th century, the order slowly recovered and began to found monasteries again in Europe, but also in the USA. The order experienced another setback due to the expropriations of the Nazi regime and the socialist states of Hungary and Czechoslovakia.

In 1954, another monastery was founded in Germany with the monastery in Gelsenkirchen-Buer . The Servitan Secular Institute (SSI) has also been part of the Servite family since 1952 .

Today the Order is dedicated to missionary work. With the Pontifical Theological Faculty “Marianum” in Rome , the Servites maintain their own university , which is used for regular theology studies .

Father Gottfried M. Wolff was introduced to his office on February 6, 2006 as the new Provincial of the Tyrolean Province and the German delegation of the Servite Order.

Understanding and direction of the order

Three aspects are central to the self-image of the Servite Order: close community, service to fellow human beings, turning to Mary. Common prayer, common meals and common action and planning are expressions of this self-image. Thus the foundation of the order by the community of the seven founding fathers is strongly emphasized. As a mendicant order , the service to fellow men is particularly evident in caring for the poor. In general, however, the work of the Order is not directed towards any specific field of activity.

The devotion to Mary is just as significant for the Servites. In the final chapter of the statutes of the order it says:

“In this service, the figure of Mary at the foot of the cross should be our model. Since the Son of Man is still crucified in his brothers, we, the servants of his mother, want to stand with her at the feet of the innumerable crosses to bring consolation and redeeming cooperation. "

Against this background, the Order of Servites also operates its own university in Rome, the Marianum . There, Mariology, as a sub-area of ​​dogmatics, is given an unusually high priority in the curriculum.

The order's coat of arms shows in the lower part the first letters of the order's abbreviation: S (ervi) M (ariae). The middle part of the broad M is embraced by the S. A crown floats above the M , above which seven lily flowers are arranged in a semicircle. The crown is the symbol of the Queen of Heaven, Mary, the lily blossoms symbolize the Seven Fathers of the Servite Order.

The Seven Holy Founders of the Servite Order are:

Cardinals from the Servite Order