Nikolai Erastowitsch Bersarin was from 1975 to 1992 and has been an honorary citizen of Berlin again since 2003 .

In 1913 he began evening classes at a St. Petersburg elementary school, after which he completed training as a bookbinder . On October 14, 1918, at the age of fourteen, Nikolai volunteered for the newly founded Red Workers and Peasants Army and fought against the invading forces in Arkhangelsk . In these struggles he acquired the first military knowledge and the thinking of the working class. In 1927 he was given the post of commander of this army. At the age of eighteen, Bersarin became a member of the Komsomol organization, and in 1926, after completing officer training courses for the infantry ( Wystrel ) in Moscow, he became a member of the Communist Party of the Soviet Union ( CPSU ). As a member of the military, he took part in various missions to ward off so-called "counter-revolutionaries", for example in the suppression of the Kronstadt uprising . In 1923 he was transferred to Siberia as leader of a machine gun group and platoon leader in the 5th Amur Rifle Regiment of the 2nd Amur Rifle Division . He was the commander of a training unit for commanders in Irkutsk . Bersarin took an active part in the battle for the East China Railway . From 1933 to 1935 he served on the staff of the Far East Army in Khabarovsk and Voroshilov . From 1935 to 1937 he was chief of the 77th Rifle Regiment of the 26th Rifle Division of the Far East Army. Until 1938, Bersarin was chief instructor on the staff of the Amur group there.

During the Great Terror in 1938 he was accused of having “ enemies of the people ” to thank for his career , although various Communist Party members stood up for him. As a division commander and later corps commander , Bersarin fought off Japanese attacks on Lake Chassan , for which he was rewarded with the Order of the Red Banner , a high military honor.

After the beginning of the Second World War , Bersarin was appointed major general and he was transferred to Riga , the Baltic Special Military District , on May 26, 1941 at his own request . As commander of the 27th Army , he fought against the Army Group North of the German Wehrmacht after their attack on the Soviet Union . From December 1941 to May 1944 he was commander in chief of several armies ( 34th , 61st , 20th , 39th ), and was seriously wounded near Vyazma in March 1943, which is why he was in the hospital until August of that year.

In 1944 he received the Order of Lenin for his services in the defense and was promoted to Colonel General because he broke through the German lines on the Dniester with his 5th shock army in Operation Jassy-Kishinev . The conquest of Kishinev followed on August 24, 1944.

During the Red Army's Vistula-Oder operation , the 5th Shock Army was one of the rapidly advancing units that were able to form a bridgehead south and north of Küstrin at the beginning of February 1945. At the struggle for Küstrin from mid to end of March 1945 Bersarins troops were decisively involved. The main thrust for the attack on Berlin began on April 16, 1945 from the now combined bridgehead , in the center of which Bersarin's 5th Shock Army under Marshal Zhukov was deployed as part of the 1st Belarusian Front .

After the apron of Berlin had been overcome after heavy resistance, Bersarin's troops fought in Treptow and at Görlitzer Bahnhof (April 24); on April 29, 1945, his soldiers surrounded the Gestapo headquarters on Prinz-Albrecht-Strasse .

On April 21, Bersarin's shock army was the first Soviet unit to reach the eastern outskirts of Berlin near Marzahn . On April 28th he was appointed city commander and chief of the Soviet garrison in Berlin by Marshal Zhukov. "According to Russian military tradition of the city commandant to let its troops first, the opposing walls behind them is." The first Soviet city commandant of Berlin had its headquarters in Berlin-Friedrichsfelde , Alt-Friedrichsfelde  1, while the headquarters of the Soviet garrison in Berlin-Karlshorst was . Bersarin's order number 1 of April 28, 1945 shifted the entire administrative and political power to the Soviet city command , the German administrations in all Berlin districts were thus abolished. The order ordered officials, employees and workers to remain in their workplaces and to immediately resume all supply activities. The curfew was ordered from 10 p.m. to 6 a.m. Bersarin forbade members of the Red Army to engage in any irregular act.

The administrative education in Berlin was chaotic according to the circumstances, the main ones for Bersarin were practical measures such as the establishment of a new city police, the restart of the gas, water and electrical energy supply, the procurement of food for the population and the restart of the school. He acted professionally and pragmatically - Arthur Werner , “Prototype of an old-school bourgeoisie [...] became the first mayor of Greater Berlin after the surrender. [...] On May 10th, Bersarin gathered for the first and only time all the district mayors in Friedrichsfelde who had been appointed up until then and made them perform their functions with a handshake. [...] On May 12, 1945, General Bersarin summoned the members of the new magistrate who had been proposed to him by then and installed them in their offices. "

On May 25, 1945, Bersarin ordered the pumping out of the S-Bahn and U-Bahn shafts that had been flooded as a result of the tunnel blast under the Landwehr Canal. The Reichsbahn with the Siemens-Bauunion regulated the work and procurement of the pumps, the Red Army brought in the fuel: "Machines, oil and gasoline and other necessary material are made available in sufficient quantities." The north-south tunnel was only in the Dry again in February 1946.

Order No. 8 of May 30, 1945 contained precise instructions for the repair of electricity, water and gas supply, sewerage and subway traffic.

The city commandant also tried to revive cultural life in Berlin: In June 1945 “ Ernst Legal was appointed general manager by Bersarin. He and Paul Wegener got together and arranged a meeting with Bersarin in Karlshorst, where they were driven by truck and where they were served breakfast. "

On June 16, 1945, Bersarin died in a motorcycle accident with a Soviet truck convoy in Berlin-Friedrichsfelde , Schloßstraße / corner Wilhelmstraße (today: Am Tierpark / corner Alfred-Kowalke-Straße ). He is buried in the Novodevichy Cemetery in Moscow.

In 1975 Bersarin posthumously received honorary citizenship of East Berlin . After German reunification , it was not accepted in 1992 when the lists of honorary citizens of East and West Berlin were merged . On February 11, 2003, the Berlin Senate added him to the list again, citing Bersarin's merits in the reconstruction of Berlin.

Both the withdrawal and the recognition of honorary citizenship were accompanied by heated political debates. Bersarin was accused, among other things, of having been responsible for the deportation of over 47,000 Balts as commander-in-chief of the Red Army in the Baltic States; however, this statement is deemed to have been refuted. Opponents of Bersarin's honor see his commitment to the revival of Berlin as a mere fulfillment of duty and rate his participation in the Stalin regime as reprehensible. 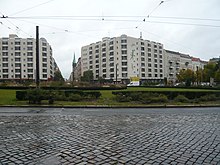 In honor of Bersarin, the former Baltenplatz in Berlin-Friedrichshain has been called Bersarinplatz since 1947 . From 1947 to 1991, Petersburger Strasse was called Bersarinstrasse. Since April 2005 a road bridge in Berlin-Marzahn has been called Nikolai-E.-Bersarin-Brücke . It is located at the point where the first Soviet soldiers from Bersarin's army reached the city limits of Berlin in 1945.

From the time of the GDR until 2005, a commemorative plaque paid tribute to Bersarin's place of work on the residential building that housed the first city command, which was then set into the pavement on the corner of Rosenfelder Strasse.

On the 60th anniversary of his death on June 16, 2005, a birch was planted in memory of the accident victim at the location of the accident (intersection Alfred-Kowalke-Straße / Am Tierpark). A memorial stone has also been there to remind him of him since 2013. The official inauguration of the stone took place on June 24, 2013. The stone and tablet were donated by the Bundestag member Gesine Lötzsch and the district association Die Linke Lichtenberg. Since June 16, 2020, a plaque commemorates Nikolai Bersarin has been at the site of the accident.

The association “Berlin Friends of the Peoples of Russia” has founded a “Interest Group NE Bersarin”, which has been committed to long-term and due recognition since Bersarin's re-entry into the Berlin list of honorary citizens. The "IG Bersarin" is striving for a permanent place for him in the German-Russian Museum Berlin-Karlshorst , whose building had served as the seat of the Soviet military administration in Germany .

“One week after the surrender, the city commandant of Berlin, General Bersarin, gave an interview to the Soviet newsreel reporter Karmen . (Karmen also worked for United Press). [...] 'His hair is gray, but the face is young, the eyes look happy,' wrote Karmen. Bersarin said to the reporter: 'I assure you that fighting is much easier than managing such a big city.' "Bersarin names two million Berlin residents, 70 percent of whom are women, children, disabled people and pensioners. Two weeks later, over 300,000 people had already come to the city.

Bersarin also found words of praise for the population, who “are eager to carry out all the intended work [...] All my orders are being carried out with great vigor [...] It seems to me that the Germans from the Hitler regime have been tormented so much that they are so exhausted by the long war that they are completely sincere in their wish to help us. "The author Erich Kuby comments:" The Berliners made it easy for him to indulge in the mistaken belief, they would be in agreement with him. ”The 41-year-old, who had a fatal accident after 50 days in office, was spared the political tensions that soon afterwards set in.