Muravyova-Amurskogo Ulitsa , one of the main streets

Khabarowsk ( Russian Хабаровск  [ xɐˈbarəfsk ] ; Chinese 伯 力 ) is a city in Russia on the Amur , near the border with China . It has 577,441 inhabitants (as of October 14, 2010) and is the capital of the Khabarovsk region in the Russian federal district of the Far East .

Khabarovsk is located in the Far East of Russia on the Amur River at 25 m above sea level. NN, in the same time zone as the Russian Pacific metropolis Vladivostok . The climate is continental with temperatures of -26 ° C in January and +26 ° C in July. In winter (it rarely gets colder than −30 degrees at noon) it is much milder than north or west of the Khabarovsk region. Instead, an icy wind often blows over the Amur and through the huge plain in which the city is located.

The Amur carries 1000 m³ / s of water (January 1985) and 17,300 m³ / s of water (May 1985) at Khabarovsk and changes its river bed again and again, which has consequences especially for the border with China, which is always on the political agenda . It flows directly alongside the city after the equally powerful Ussuri flows into the Amur a little upstream . In addition to its main arm, the Amur branches into countless side arms. It is about two kilometers wide in the urban area and flows further into the Tatar Sound between the Russian mainland and the island of Sakhalin . In winter the river is always frozen over (November to March) and is sometimes used by wheeled vehicles (less often since the road level on the railway bridge over the river was completed). In the summer it is used as a traffic route because it is navigable from Khabarovsk to the mouth.

Since the accident in a chemical plant in China in autumn 2005 , which also poisoned the Amur, bathing, which was already problematic at least on the beach in downtown Khabarovsk because of the poor water quality, has become generally questionable.

Khabarovsk was founded in 1858 as a military post at the mouth of the Ussuri in the Amur and named after the Cossack Yerofei Pavlovich Khabarov , who explored the area in the 17th century, Khabarovka . In 1895 it was given its current name.

In January 1926, the Far Eastern Kraj was created with the capital in Khabarovsk.

During the Soviet-Chinese border war in 1929, the headquarters of the Red Army was in Khabarovsk. To this day the place is the main base of the Far East military district .

In 1938 the Far Eastern Kraj was divided into Kraj Khabarovsk and Kraj Primorye .

In 1949 war crimes trials against twelve members of the Japanese army took place in the city .

From 2000 to December 2018, the city was the administrative center of the Far East Federal District .

The 2013 gubernatorial elections in Khabarovsk Krai were won by Viacheslav Sport from the United Russia party. After the 2014 regional parliament elections, United Russia received 30 out of 36 seats.

In 2018, the gubernatorial elections were surprisingly won by a former businessman and LDPR member Sergei Furgal . He quickly became popular, and after the 2019 regional parliamentary elections, the LDPR received 30 seats out of 36, while the United Russia party received only two.

During the referendum on the constitutional amendments in June and July 2020, participation in Khabarovsk Krai was one of the lowest in Russia, and the percentage of yes votes was also below average. On July 9, Governor Sergei Furgal was arrested and taken to Moscow, allegedly for his involvement in 2004 and 2005 killings. After a few days, President Putin deposed him by decree and appointed Mikhail Degtyaryov as the incumbent governor of Khabarovsk. Michail Degtjarjow was a member of the United Russia party until December 2005 and a functionary of the Putin-friendly youth organization The Going Together , after which he switched to the LDPR , but was still considered a Putin-loyal member of the Russian system opposition.

After Furgal was arrested and especially after Degtyaryov, who had never seen the Russian Far East before, protests flared up in Khabarovsk and other parts of the region . 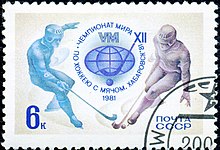 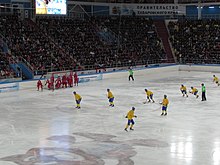 One of the most famous sports clubs in the city is the HK Amur Khabarovsk ice hockey club , which takes part in the continental hockey league (KHL) . Its home arena is the multi-purpose hall Platinum Arena , completed in 2003 , which has almost 7,100 seats and is used not only for ice hockey games, but also for volleyball games and concerts with a capacity of up to 8,500 seats.

Khabarovsk is home to the football club FK SKA-Khabarovsk , which represents the city in the second-highest Russian league . The games will be played in the Lenin Stadium .

In winter, ice sculptures are regularly made and exhibited in public spaces. Even ice sculptors from Harbin come to take part in the competitions.

Almost 75% of the city's population is employed in the industrial sector (mechanical engineering). Like the entire Far East region, Khabarovsk benefits from the commitment of Japanese and Korean investors.

The investments go mainly into mining, the exploitation of natural resources, the conversion of former armaments factories, the development of a transport system and also into the production of consumer goods. Foreign investment is estimated at over $ 120 million.

In Khabarovsk, 700 kilometers from Vladivostok , the Trans-Siberian Railway crosses the Amur on a three-kilometer bridge . The city is the administrative seat of the Far Eastern Regional Directorate of the Russian State Railways . The directorate not only operates all railway lines and the associated infrastructure in the greater Khabarovsk area, but also a rail network over 5991 kilometers long, mainly in the Far East Federal District.

The city’s public transport is provided by the Khabarovsk tram . The most common means of transport, however, are buses and private minibuses ( marshrutkas ). You pay per trip, so you have to buy a new ticket when you change trains. So far (as of 2008) there are no season tickets or day tickets. Veterans and retirees travel for free on state and some private transport.

Khabarovsk has an airport which was rebuilt in 1993 (new terminal) and completely renovated in 2007. Fly from Moscow z. B. Aeroflot , S7 Airlines and Domodedovo Airlines direct to Khabarovsk. There are also international connections to Japan, Korea and China as well as a number of regional connections, e.g. B. to Magadan, Yuzhno-Sakhalinsk, Vladivostok, Blagoveschensk and others.

The road network has been expanded many times in recent times and is mostly of quite good quality. Only roads to more remote towns are not paved. The increase in the extraction of raw materials and minerals in large mines in the sometimes remote regions is likely to result in further investments.

The Far East Children's Railway is a narrow-gauge pioneer railway in Khabarovsk.

The following universities are located in Khabarovsk:

Administrative division of the Khabarovsk Territory