The title of this article is ambiguous. Further meanings are listed under Harbin (disambiguation) .

Harbin ( Chinese  哈爾濱 市  /  哈尔滨 市 , Pinyin Hā'ěrbīn Shì , W.-G. Ha-erh-pin ; Manchurian ᡥᠠᠯᠪᡳᠨ; russian Харби́н / Charbin russian pronunciation ? / I ) is the capital of the province of Heilongjiang ( Amur province ), Manchuria , China , on the River Songhua River with a population of 4,596,313 in the urban area (census 2010). There are 4.8 million people in the urban agglomeration and 10.98 million people lived in the total area in 2016.

The sub-provincial city of Harbin is made up of nine municipalities , two independent cities and seven districts at the county level . These are:

According to the UN, almost 6 million people lived in the actual urban agglomeration of the city (as of 2017). The rest of the population lives in the rural area. Due to advancing urbanization, 7.9 million inhabitants are expected in the agglomeration by 2035.

Ethnic composition of the total population of Harbin (2000)

The 2000 census counted 9,413,359 inhabitants for the entire administrative area of ​​Harbins.

The city was founded by Russians in 1898 - after the occupation of northern Manchuria by Russia - as a train station of the Transmanchurian Railway , which is why the cityscape of the older parts of the city is still characterized by Russian architecture. After the October Revolution in particular , many Russians fled to Harbin and contributed to the prosperity of the city. In 1932 the city was occupied by Japanese troops. After Japan surrendered in World War II , the Soviet Union took over the city. Although they handed the city over to the Republic of China as agreed , the Red Army troops remained stationed there. With her tacit approval, the Chinese Communist Party was able to conquer the city as early as 1946. The industrial facilities there served them as the basis for victory in the civil war .

After the founding of the People's Republic of China , the heavy industry in Harbin was expanded. To this end, people from southern China were resettled here and the Technical University was reinforced by teachers from the south. Many of these people returned to their old homeland after the easing of the housing regulations.

Since the economic reform, Harbin and Heilongjiang Province have been trying to establish themselves as bridgeheads in trade with Russia .

In November 2005, the Jilin chemical accident contaminated the water of Songhua Jiang with benzene , causing the city's drinking water supply to be cut for several days.

Heavy smog spread over Harbin on October 20, 2013 . The airport, schools and kindergartens were closed for three days. All highways were closed after series of accidents. The city's coal-fired heating system was started in relatively warm weather with little wind. On October 25th, cold air flowing in from Siberia caused the smog to rise and subside. 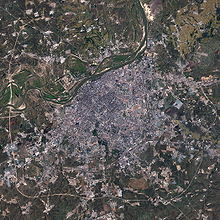 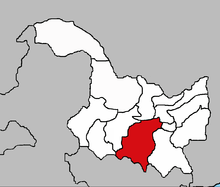 Location of the city in Heilongjiang

The urban area extends mainly on the south bank of the Songhua Jiang , a tributary of the Heilong Jiang (Amur). The north bank is being developed as a local recreation area. The urban area is largely flat, there are only differences in level of around 150 meters. The area covers 56,579 km², of which 7086 km² urban area.

The winters are very cold in Harbin, at night the temperature can drop to -40 ° C. Often it starts to snow in October and the frost usually ends at the end of April. Accordingly, the growing season is relatively short. In summer the city is pleasantly cool by Chinese standards, so that it is a popular conference location in China in summer.

According to a study from 2014, Harbin had a gross domestic product of 127.9 billion US dollars in purchasing power parity . In the ranking of the economically strongest metropolitan regions worldwide, the city took 104th place. The GDP per capita is $ 12,865 (PPP). At 10.1% in the period from 2009 to 2014, GDP per capita grew rapidly.

Harbin is an industrial location with branches such as mechanical engineering , light industry , textile industry , medicine , food industry , automotive industry , electronics , chemical industry . The production play a dominant role of power plant equipment, aircraft, buses, measuring instruments as well as the production of larger quantities of aluminum - magnesium - alloys for further processing in other Chinese plants or for export. The Harbin City Commercial Bank is in the area of granting small loans very active.

The Harbin Fair takes place annually from June 15 to 21. It is the most important universal fair in Northeast Asia and was first held in 2001. 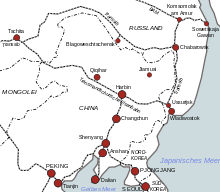 Harbin is also an important railway junction in northeast China. Five railway lines connect the city with Beijing (Jingha Line), Suifenhe (Binsui Line), Manzhouli (Binzhou Line), Beian (Binbei Line) and Lalin (Labin Line). In addition, a high-speed railway line runs between Harbin and Dalian , and another was opened at the end of 2018: the Harbin – Mudanjiang railway line . The city has the following train stations:

The first and also the only inland port in China is located in the Harbin area and is a developed natural port. It is of medium size, has a connection to the railway network and is also used for the shipping of export goods.

Harbin is connected to the system of about 1,900 rivers in Heilongjiang Province via the Songhua River. This enables extensive passenger and cargo shipping. The Harbin Yangmingtan Bridge suspension bridge , which was opened to traffic in 2011, (probably) collapsed under the load of several heavy vehicles in the summer of 2012, killing three people.

The Harbin Songpu Bridge , a modern cable-stayed bridge , also spans the river . It was opened to traffic in October 2010, is around 4 kilometers long, has two lanes in each direction, and cost 1.6 billion yuan to build .

Five express highways and five motorways run through the city or along the tangent . This well-developed road system together with the city streets provides the residents with everything they need.

In 2009, the construction of a subway system ( Metro Harbin ) began, which should have nine lines and a ring line when completed (around 2027). The first line opened in 2013 and forms an east-west connection between the Medical University and the Ostbahnhof. It is around 18 km long and consists of 18 stations. 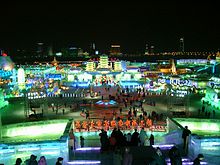 In winter, usually from early January to mid-February, Harbin hosts the Ice and Snow Festival and the Ice Lantern Festival. Ice and snow sculptures, some of which are filigree, are then exhibited at various locations in the city . The largest sculptures are replicas of famous monuments such as the Louvre in Paris or the Beijing Summer Palace. The sculptures can be several meters high and are illuminated in multiple colors from the inside at night. In January 2009 there were also four lanes of ice slides that were made entirely of ice, not just to look at, but also to use. The festival was first held in 1984 and has now developed into a winter tourist attraction. It is one of the four largest ice and snow festivals in the world (next to the Sapporo Snow Festival, the Ski Festival in Oslo and the Winter Solstice Celebration in Québec ).

The venues include the Harbin Engineering University site, Zhaolin Park, and Sun Island Landscape Area (this is where the snow sculptures are primarily made). In 2012, a new official world record was set: 52 teams from all over the world used 1,858 cubic meters of snow for their sculptures. The first prize at the International Collegiate Snow Sculpture Contest 2012 was won by a team of students from the University of Milwaukee in the USA .

Since 2002 an international beer festival (based on the Munich Oktoberfest ) has been held every year in July . The city can look back on the longest tradition of beer brewing in China: The Harbiner Brewery was founded in 1900, three years before the world-famous Tsingtao Brewery .

The Harbin Symphony Orchestra, founded in 1908, is China's oldest orchestra . The Harbin Music School No. 1 was founded in 1928 by immigrants to Harbin who arrived here when the main train station opened, mostly Russians. Around 100 world-famous musicians have emerged from this first music school in China. The Harbin Summer Music Concert includes a whole series of concerts and is well attended. It started in 1958 (officially 1961) and was organized annually until the Cultural Revolution in 1966. A resumption took place in 1974, initially still annually in August. Since 1994 it has been held every two years in various locations in the city.

The UNESCO took Harbin in 2010 as a member of the Creative Cities Network as Music City on.

The Harbin Grand Theater opened in 2015 .

Panorama of the Harbin Grand Theater

About 800 Siberian tigers live in a tiger farm in Harbin in order to take the pressure off the wild tigers and to enable the resettlement of tigers in former tiger areas (Kazakhstan, East China).

Different types of buildings, classical and modern Chinese as well as Japanese and European buildings can be seen here. The dragon tower, completed in 2000, is one of the highest steel lattice towers in the world. According to the ethnic composition of the inhabitants, the city area also has a wide variety of religious buildings.

The Chinese military operates a launch site near Harbin for testing military missiles.