Pioneer railways were narrow-gauge railways in the countries of the Eastern Bloc that were operated by children and young people. They got their name from the pioneers , the members of the respective youth organizations. A large part of these railways continues to be operated unchanged today with the apolitical designation park railway or children's railway . 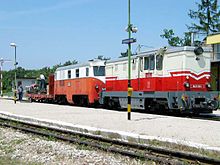 The name pioneer railroad comes from the fact that the railways were largely operated by members of the youth organization of the respective communist party, which in many states of the Eastern Bloc was called "pioneers". This was done according to operating regulations that corresponded to the railway of public transport. Colloquially, the term pioneer railway is still common. Because of their location, the former pioneer railways of the GDR are all called the Park Railway, in other countries they are often called the Children's Railway.

Pioneer railways of the GDR

In 1950, a children's railway was opened with simple means in the Great Garden in Dresden on “ Children's Day ”, which was only supposed to exist for one year. Pre-war material was used that was designed for exhibition railways and was used for a similar purpose at the time. The facility remained and became the first pioneer railway in the GDR on May 1, 1951. Over the years, eleven other railways with a similar concept followed. In contrast to other railways of this type, such as in Hungary and Czechoslovakia, where a museum has also been partially implemented, the lines in the GDR should be more modern. Although the pioneer railway in Berlin was built with vehicles from the former Mecklenburg-Pomerania narrow-gauge railway , the traditions were ignored and a conscious decision was made to operate with modern-looking diesel locomotives. Only the pioneer railway Cottbus defied this requirement and used old steam locomotives of the forest railway Muskau in front of their trains.

The basis for the construction and operation of the pioneer railways has been the Building and Operating Regulations for Pioneer Railways (BOP) since 1980 . It "regulates the development, preparation and construction of new buildings, extensions and changes, the repair of railway systems and vehicles as well as the implementation of operational services, qualification and service execution of the employees". Section 45 (5) BOP regulated who was allowed to take part: “Pioneer railroaders can be children and young people from school years 4 to 12 and apprentices up to the age of 18. They must be fit, trained, tested and instructed in their work. Pioneer railroaders are only allowed to work under the control of a company railroader. "

In the GDR, the railways belonged to the cities - with the exception of the Berlin Park Railway, which was temporarily part of the Deutsche Reichsbahn (DR) . They were operated by the members of the pioneer organization. They were supported by the DR. With the exception of one section in Dresden, the routes are all single-track , often run in a circle or have otherwise atypical turning loops on the railroad .

Parents' permission and a school certificate were required before starting work. After a basic theoretical training, the children and young people were allowed to work as train conductors , supervisors, gatekeepers, barriers at entrances and exits, at the ticket office, dispatcher and train driver . From the 9th grade onwards, interested students could acquire the qualification to become a brigade leader or in technical working groups as a locomotive engineer. The uniforms corresponded with differences to those of the Deutsche Reichsbahn. The younger pioneer railroaders were allowed to wear shorts. A “P” on the epaulettes made the difference to the DR railroad workers. For every two years of service there was a strip for the epaulets.

Pioneer railways also served to introduce children and young people to rail operations and were intended to prepare them for a later career choice in favor of the railways . Pupils from the older age groups were partly referred to the park railway by the career advice cabinet (BBK) of the DR. Quite a few pioneer railroaders chose a career with the railroad or other transport companies. In the winter months, the focus was on training and further education.

With the exception of the railway in Magdeburg , all of the former pioneer railways of the GDR have been preserved, some with irregular operations. On some of the railways there are few or no children and young people left as railway workers. The Berlin Park Railway has the longest route network today with 7.5 km.

Pioneering railways in other countries

The first pioneer railway opened in Moscow in 1932 , but was discontinued the following year. The first pioneer railway in permanent operation was opened on June 24, 1935 in Tbilisi ( Georgia ). At the end of the USSR there were a total of 52 such railways across the country, and many of them are still in operation today. As a rule, they had a track width of 750 mm and were operated by the state railway.

Based on the Soviet model, pioneer railways were opened in Hungary in 1945 for the training of young people at MÁV . In the Buda Mountains , an 11.2 km long route was built, which was opened in 1948. In 1990 these and the other railways, such as those in Debrecen , Pécs or Tiszakécske , were renamed the Children's Railway (Gyermekvasút) .