Course of the Atlantic Wall in May 1944 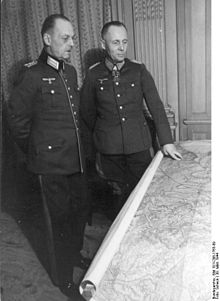 Field Marshal General Gerd von Rundstedt (left) and Erwin Rommel in the headquarters of the LXXXI. Army Corps standing in front of a map, March 30, 1944

Rommel during an inspection of Hemmbalken on the Atlantic Wall, April 1944.

On December 14, 1941, Hitler demanded a "belt of bulwarks" on the 5000 kilometer long Atlantic coast . After the failed landing of Canadian troops near Dieppe on 18./19. On August 25 , 1942 ( Operation Jubilee ) General Field Marshal Gerd von Rundstedt ordered the fortification of the entire Atlantic coast to form an "Atlantic Wall". In order to be able to meet the huge demand for labor, on the initiative of Field Marshal Wilhelm Keitel , the order was issued on September 8, 1942, to oblige the population of the occupied territories to perform forced labor in violation of international law . The Todt organization operated the construction sites largely without heavy machinery and the forced laborers were badly treated and cared for. After the end of the war, this war crime was charged in the Nuremberg trial against the main war criminals, the defendants Wilhelm Keitel, Fritz Sauckel and Albert Speer . From September 1942 to June 1944, work was carried out intensively on fortification structures on the Atlantic Wall. Some materials were scarce or became scarcer during the war; the losses in the German-Soviet war also made soldiers “scarce”.

After the death of Fritz Todt , General Field Marshal Erwin Rommel pushed ahead with work on the "Atlantic Wall" from November 1943 . He saw no “wall” in the “Atlantic Wall”, but a number of isolated coastal fortifications. An inventory after taking office showed him that the "Atlantic Wall" was a propaganda construct . Much wasn’t finished. Gerd von Rundstedt, Commander-in-Chief West , expressed the view as "a huge bluff".

After Rommel was entrusted with his new job, he traveled many stretches of coast to get an idea of ​​the local situation. In the absence of troops, he did not consider operational reserves to be possible; His conclusion was therefore: “HKL [main battle line] is the beach.” In the following period, Rommel's plans tied up large parts of the empire's resources to man and material for the “Atlantic Wall”. Very large amounts of steel and concrete were sent to the construction sites of the "Atlantic Wall" from all over the area under Nazi rule. Because of the constant shortage of steel, larger rotatable steel armored turrets were dispensed with at the design stage; only splinter protection hoods were installed in larger systems. The gun emplacements were mostly built in the style of tunnel batteries or casemates and therefore looked more like bunkered shelters. As a result, the field of fire of the guns was very limited. In places, the turrets of older tanks, such as captured French Renault FT , were therefore integrated into the lines. In order to obtain raw materials, parts of the Maginot Line and old German border fortifications were dismantled, melted down and used on the "Atlantic Wall".

Rommel soon recognized the very shallow defense depth of the Atlantic Wall; so he had the beaches and surf zones barricaded. Obstacles were erected in great numbers; These consisted of several rows of Czech hedgehogs, jamming bars, many of which were equipped with mines or HE shells at the tips, and barbed wire entanglements . Coastal areas, riparian zones and spaces between individual nests of resistance were mined on a large scale . “ Rommel asparagus ” was also used in many places ; These obstacles in the open field, made up of masts and wire stretched between them, were intended to avoid or at least make airborne operations much more difficult. Systems of trenches, moats, armored walls and fire traps complemented the fortifications. For security reasons, buildings near the coast were expropriated and demolished or, in places, integrated into the defenses. The coastal cities were mostly surrounded by several nests of resistance and / or fortresses; in the cities themselves there were defense points in various places. Existing defenses were also rebuilt and supplemented. To camouflage the bunkers, depending on the local conditions, they were hung with camouflage nets, provided with camouflage paint or plaster, camouflaged as "normal" buildings or integrated into rocks or the like.

From November 1943 a total of 291,000 men worked on the “Atlantic Wall” in France, including a. 15,000 Germans and 85,000 French. Construction sites with up to 1000 men were not uncommon. Forced laborers and various resistance groups often committed acts of sabotage, which made the construction work considerably more difficult , in addition to the danger posed by the increasingly superior airborne enemy.

The construction activities on the "Atlantic Wall" were closely monitored by the Allies (especially by means of aerial reconnaissance ). Much information also came from resistance groups such as B. the Resistance . In many places the Allies tried to stop the construction work by bombing or to destroy the buildings. The collateral damage to civilian buildings was substantial; some places like Lorient , Saint-Nazaire or La Pallice were badly damaged. Most military installations could only be effectively fought from the air with the development of bunker-breaking bombs (e.g. the British " Tall Boys "). So that destroyed British air force on 6 July 1944 to launch bunker Mimoyecques the V3 (south of Calais) with three Tallboy.

Importance of the Atlantic Wall in War 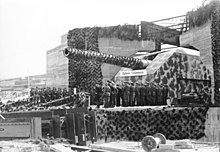 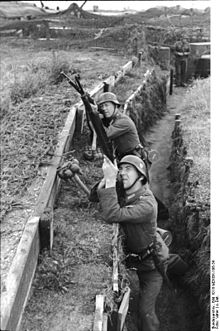 Before the Allied invasion ( Operation Overlord ), the fortifications were most advanced in France, particularly on the Strait of Dover , where an enemy invasion was most likely to be expected at the narrowest point of the English Channel. This assessment was supported by the Allies through deception maneuvers (details here ). The expansion of the fortifications around the Gironde estuary and the facilities in the area of ​​the Spanish border near Bayonne / Biarritz were the most advanced due to their importance for overseas transfers . Here, with a huge construction effort by the Todt Organization and with the use of thousands of forced laborers and prisoners of war, bunker systems and batteries for guns of various calibres were built.

The mouth of the Gironde, several kilometers wide, formed the southern end of the Atlantic Wall . In the "Fuehrer's Instruction No. 50" Hitler ordered that all river estuaries be developed into strong "defensive areas" in order to secure them against an Allied invasion. In January 1944, Hitler declared some areas of defense to be “fortresses” that had to be defended “down to the last cartridge” (see Fester Platz (Wehrmacht) ). On the headland between the Atlantic Ocean and the Gironde, the Gironde South Fortress was built on an area of ​​170 square kilometers .

The following, incomplete list of battery positions gives an idea of ​​the number of mountings :

The gun batteries were usually equipped with cannons with a caliber between 10.5 cm and 15.5 cm, as the following list shows:

In addition, the Éperlecques log house, the largest bunker in France, was largely completed. This structure should serve as a base for the use of the V2 .

Concept of the Atlantic Wall 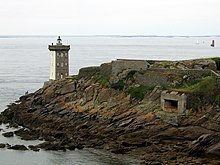 Bunker of the Kermorvan tank factory in the foundation wall of Fort de l'Îlette de Kermorvan , 2009.

A total of 8119 bunkers were built for the Atlantic Wall. For reasons of efficiency, standard or regular buildings were developed for the various branches of arms, most of the buildings were built according to these plans. The individual Military Branches Army , Air Force and Navy have their own largely standardized on / equipment. The type of weapon often required the armament of the individual systems, so the Würzburg radar was operated by the air force, the particularly heavy gun batteries and the sea target batteries were often operated by the navy. The individual standard buildings were erected as modules, with an arrangement that was adapted to the protective purpose and topography. For example, the marine target batteries were located near the beach, the fire control stations were raised and the ammunition and crew systems were moved further back. The individual modules were connected either by more or less fortified trenches and partly by covered paths or cavities. A major disadvantage of the Atlantic Wall was above all the shallow defense depth, in many places it was only a few hundred meters. When the attacker broke through the first line, only light self-defense systems of the infrastructure buildings followed in the immediate hinterland, no further lines were planned. There was no structure made up of many interlinked lines like the Maginot line . As a result, after a successful breakthrough in the beach area, a deep penetration into the hinterland was possible. 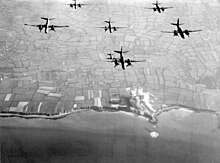 During Operation Overlord , the disadvantage of the low depth of defense was particularly evident here. Compensating for the massive superiority of material, information and crews of the Allies only by means of “paved beaches”, “throwing it back into the sea”, turned out to be almost impossible, especially since the landing beaches were almost all heavily bombed by sea and air beforehand . Once the first breach was made, the invader could advance far in all directions. On the part of the Germans, uncertainties about competence, incorrect assessments, changing strategies to defend the Atlantic Wall and the prevailing assumption until D-Day that the invasion would take place at the narrowest point of the English Channel led to further serious wrong decisions, which later favored the invasion.

The positions of the Atlantic Wall in Normandy withstood the carefully planned Allied invasion for only one day ( Operation Neptune ). The systems on the French west coast remained in German hands for a longer period, especially those in the area of ​​submarine systems. They were gradually eliminated as they were not primary targets. The rapid advance on Paris and then Berlin had priority. The Atlantic Wall no longer played a decisive role in the further course of the Second World War, although the positions were sometimes stubbornly defended by the Germans.

The coastal cities and port cities of the Atlantic Wall, which Hitler declared to be " fortresses ", were partly held by the German occupations until the surrender, or the Allies, who had lost 10,000 soldiers (dead and wounded) in the invasion of Brest , decided to keep the coastal cities under siege until the war was over, so that the remaining population there had to go through an additional nine-month siege period in the totally destroyed city. Such military cauldrons of the Atlantic Wall until the end of the war were, for example, the cauldrons of Dunkirk , Lorient or Saint-Nazaire . “Overlord” did not end for the populations of these cities until May 9 or 10, 1945.

The architecture critic Christoph Hackelsberger points to the relationship between the formal language of the bunker buildings of the Atlantic Wall and Expressionist architecture and concrete constructions of the 1920s, including the Goetheanum in Dornach. The most important contribution to the exploration of the bunkers as architectural artifacts comes from the French architect Paul Virilio . In 1975 he set up an exhibition at the Pompidou Center in Paris entitled “Bunker archeology”. Together with Claude Parent, he designed the Sainte-Bernadette du Banly church in Nevers, which obviously takes up the design language of the bunkers.