Audio and video signals typically have high signal energies in the lower spectral range, for whose decorrelation DCT is particularly well suited and which explains the widespread use of this transformation. Further subordinate applications are the solution of partial differential equations using spectral solution methods. Within the framework of the Chebyshev approximation, the DCT has a mathematical relationship to the Chebyshev polynomials . It is still closely related to the discrete sine transform (DST).

The discrete Fourier transformation, which is defined via a finite input sequence, implicitly also has a definition of how the input data sequence is continued outside of this finite sequence due to the type of transformation and its boundary conditions . In the case of the discrete Fourier transform, this is a periodic continuation; in the case of the discrete cosine transform, this is a straight continuation of the generating signal sequence. 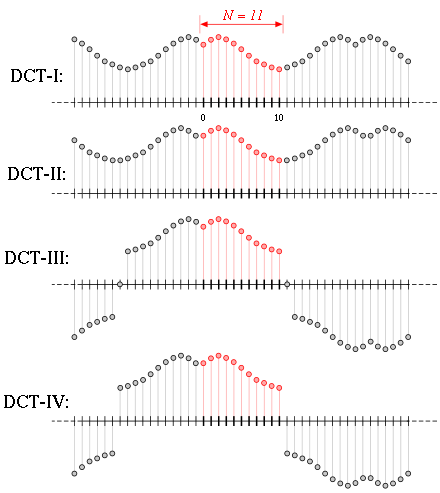 The eight boundary value conditions in the continuation, which have an even continuation at the beginning of a sequence, are counted as part of the discrete cosine transformation, the remaining eight forms with an odd continuation at the beginning of the sequence result in the discrete sine transformation (DST). The various forms are referred to in the literature as DCT-I to DCT-VIII and DST-I to DST-VIII. The four main variants DCT-I to DCT-IV and their continuations in the area of ​​data compression are shown in the figure opposite. The other four variants of the DCT and all 8 variants of the DST are irrelevant in the area of ​​data compression.

These differently continued sequences essentially determine the properties of the individual transformations and their practical significance. When solving partial differential equations by means of spectral transformation, all variants of the DCT or DST are used, depending on the problem. In the area of ​​lossy data reduction of image signals such as JPEG, the DCT-II is used in a two-dimensional transformation, which is why colloquially the "DCT" or the FDCT for forward discrete cosine transform is the type DCT-II. The inversion of the DCT-II is, for reasons of symmetry and except for a constant factor, the DCT-III, also referred to as IDCT for inverse discrete cosine transform (dt. Inverse discrete cosine transformation). In the area of ​​lossy audio signal compression, such as the MP3 file format, a continuous discrete audio data stream must be transformed, whereby the MDCT, which is based on a one-dimensional DCT-IV, is used to avoid aliasing effects in the time domain.

In the area of ​​image and audio compression, the type of continuation and thus the marginal values ​​determine how well the transformation is suitable for data compression. The reason for this is that jumps in the signal sequence lead to high coefficient values ​​in all frequency bands and thus in particular to high-frequency spectral components. This also applies if these jumps occur at the edges of the signal sequence as a result of an unfavorable continuation.

In contrast to the discrete Fourier transform, all forms of the DCT are real transforms and yield real coefficients.

With regard to its boundary values, the DCT-I is just at the beginning and just at the end .

Except for the constant factor 2 of the DFT, the DCT-II corresponds to a real sequence of elements with even symmetry, with all elements with an even index having the value 0.

With regard to its marginal values, the DCT-IV is even at the beginning and odd at the end .

A variant of the DCT-IV is the modified discrete cosine transformation (MDCT), whereby the data sequences of the individual data blocks are overlapped, similar to the overlap-add method , in order to obtain an aperiodic curve.

The pre-factors of the DCT are not standardized in the literature. For example, some authors introduce an additional factor of in DCT in order to avoid the additional factor in inverse surgery. By suitable choice of the constant factor, the transformation matrix can represent an orthogonal matrix . 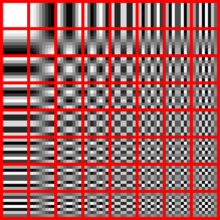 The two-dimensional DCT, based on the DCT-II, plays an essential role in digital image processing in particular . In the simplest case, expansion to several dimensions is carried out by applying the transformation in columns or rows. For practical implementations, there are more efficient algorithms for calculating higher-dimensional transformations.

The right figure shows as a simple example all spectral components of a two-dimensional DCT-II with eight coefficients in each dimension. The field at the top left (index 0.0) shows the constant component of the signal, in the horizontal direction the horizontal frequency components are increasing. The frequency is doubled across two indices. The same applies to the vertical direction and to the linear combination of the two directions.

In JPEG, each color component (Y, Cb and Cr) of the image is divided into 8 × 8 blocks which are subjected to 2D DCT.

3D-DCT is also sometimes used in film formats. Here is a group of pictures ( group of pictures , GOP) considered multiple images also with regard to the change in time. This method is used, for example, with SoftCast .

Illustrative example of an iDCT

The starting material is an 8 × 8 grayscale image of the letter A.

DCT of the image: 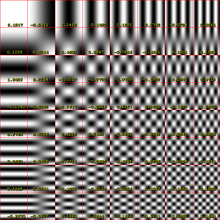 general basis functions of the discrete cosine transformation correspond to the coefficients specifically related to the above example.

Each individual DCT basic function is multiplied by its current coefficient. The resulting image weighted in this way is added to the finished image.

Recovering an 8 × 8 grayscale image of the letter 'A' from the stored DCT coefficients.
Left: finished image,
middle: weighting function, which was multiplied by the current coefficient and added to the finished image.
Right: general DCT basic function and the current - related to the example - coefficient
Zoom: 10 × bilinear

The above illustration was enlarged by means of a bilinear zoom. The otherwise square pixels are displayed blurred. The finished image is still an 8 × 8 grayscale image with possibly more or less minimally different color values ​​compared to the original.