The FuMG 62 was one of the first pulse radar devices to work with decimeter waves at a frequency of 560 MHz ( wavelength 53.6 cm) to accurately record the distance and altitude of enemy aircraft . Development began in the late 1930s; the first devices were used in 1940. In total, more than 4000 devices of various model series were probably manufactured. It was named after the city of Würzburg , as the head of Telefunken radar development Wilhelm Runge preferred cities as an alias (see also Lichtenstein radar ). 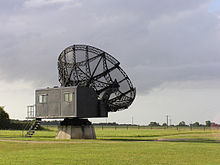 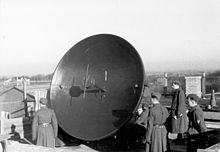 "Würzburg" device in use in France

In January 1934, employees of the Telefunken Society met with German radar researchers, including Rudolf Kühnhold , the head of the research institute of the communications testing department (NVA) of the Reichsmarine, and Hans Erich Hollmann , the expert on decimeter waves , to tell them about their work on an early warning radar teaching. Telefunken's head of research, Runge, thought their ideas were pipe dreams. The two developers then joined GEMA (Society for Electroacoustic and Mechanical Apparatus), which was founded in 1934 , in order to be able to work together with C. Lorenz on the development of the Freya and Seetakt radar systems .

In the spring of 1935, Wilhelm Runge realized during a test with a continuous wave radar that the project had to be feasible and advocated the development of its own radar system at Telefunken. Since the Lorenz company was already beginning to show success in the early warning area, he put the focus at Telefunken on fire control radar for close range. However, the company management was as uninterested as Wilhelm Runge was the year before and did not attach much importance to the project in development. However, this did not prevent that a functioning experimental device was available as early as the summer after the start of development, which was able to recognize a Ju 52 as a target in the 50 cm band . In the next summer, the experimental device became a prototype (known under the name Darmstadt ) with an accuracy of 50 m at a distance of 5 km, which probably did not seem sufficient for a fire control radar. In the autumn of 1938, an order from the Luftwaffe accelerated development.

The finished system was first presented to Hitler as FuMG 39 in the Rechlin test center in July 1939 , at the same time as the FuMG 39T Darmstadt . The group at Telefunken had developed a very precise device that worked in the decimeter wave range with a frequency of around 560 MHz, which was difficult to achieve at the time. The device, later renamed FuMG 62, sent a pulse length of two microseconds at a pulse repetition frequency of 3750 Hz, switchable from the FuMG 62 C to 5000 Hz. With a peak pulse power of 7 to 11 kW, it had a maximum range of 29 km and was 25 m exactly. The parabolic antenna mounted on a mobile trailer had a diameter of about three meters and could be folded up for transport along the horizontal center line.

Wurzburg Type A in the Imperial War Museum London

In autumn 1939 the Wehrmacht ordered 5,000 devices. The first version - the Würzburg A delivered from the beginning of 1940  - required the maximum of the pulse reflected from the target to be adjusted on a cathode ray tube with the antenna. Because not only did the signal strength itself change and the radar could lose its focus on the target, the method was not very precise and required the use of searchlights to illuminate the target as soon as an approximate direction could be determined with the radar. Nevertheless, a flak unit in Essen succeeded in shooting down an aircraft in May 1940 with one of the first Würzburg devices through verbal target instruction. From October 1940 serial devices were delivered to the Wehrmacht and used by the flak .

An experimental unit in Würzburg B was equipped with an infrared detector to improve accuracy, but these units proved to be unusable and production was discontinued.

"Würzburg" radar in an 8.8 cm anti-aircraft position on the Atlantic Wall

Improvements in the target system led to the Würzburg C variant . This transmitted with two horn radiators installed slightly deviating from the focal point , which transmitted alternately and were switched at high speed. The echo signals were shown slightly offset in time on an oscilloscope screen. As a result, two closely spaced peaks were displayed on the screen, which the operator tried to keep at the same height. This system provided much faster feedback of changes in target position, and because any change in signal strength affected both beams, the operator no longer necessarily had to find the signal maximum. A similar system was used in the United States as the SCR-268 fire control radar . 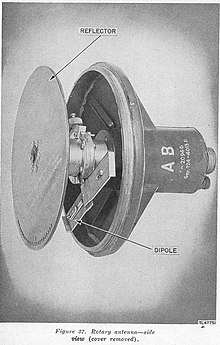 Details of the "whisk" (photo without cover)

The Würzburg D model introduced in 1941 was expanded to include a conical scanning system with an offset receiving antenna that rotated at 25 Hz and was therefore also called the "whisk". The resulting signal deviated slightly from the main beam direction of the antenna and rotated around the beam axis, which it overlapped in the middle. If the target was to either side of the antenna's main beam, the signal strength would change as the beam moved over it. This made it possible to align the antenna to the axial signal minimum and thus to keep the target in focus. In addition, the range of the signal minimum could be reduced below the size of the beam width of the antenna itself, which drastically increased the accuracy. The accuracy of the Würzburg-D devices was approximately two degrees in the lateral direction ( azimuth ) and three degrees in the height direction ( elevation ). The units that were already in use were generally upgraded to the 'Würzburg D' stand.

Also the Würzburg D was not accurate enough for direct Feuerleitbetrieb. To increase the accuracy, the "FuMG 65 Würzburg-Riese " was developed. While maintaining the wavelength of 53.6 cm and basically using the same circuit technology, the diameter of the parabolic antenna was more than doubled from three to around 7.5 m. Together with the increased peak pulse power, this resulted in a range of 70 km. The lateral alignment accuracy was increased to 0.2 ° and the elevation accuracy to 0.1 °, which was more than sufficient for a fire control radar. The device, which weighed 15 tons in total (11 tons of which was a rotating part with parabolic mirror and control room), was now too big to be used on the road. The Würzburg giants could therefore only be used stationary or mobile on railway wagons ("FuMG 65 E"). During the war, around 1,500 devices were produced and mainly used to guide the night fighters of the Luftwaffe and installed for fire control on the large flak towers .

The further developed Würzburg giant had a transmission power of 160 kW, but did not go into production.

A Würzburg radar station on the French Channel coast near Bruneval was attacked by 120 British paratroopers on the night of February 27-28, 1942 during " Operation Biting ". Major parts of the device and a man of the operating staff were brought to Great Britain. The technicians commissioned with the investigation were impressed by the modular structure of the radar device, which made maintenance and troubleshooting much easier. The modular construction made it possible that the operating personnel of the Wehrmacht did not need to have any knowledge of the technology, as was the case on the British side. It was also noticeable that the Würzburg device only had a small bandwidth and used a fixed frequency. In addition, the execution at that time had to be disrupted by simple measures (“ chaff ” or “window”).

The Bruneval attack caused the Wehrmacht to use tight rolls of barbed wire , among other things, to set up additional safeguards on the radar positions, which, however, made them easier to see from the air. On the British side, in August 1942, the Telecommunications Research Establishment (TRE) research institute was relocated from the coastal Swanage ( Dorset ) to Malvern (Worcestershire) inland to prevent a similar attack from the German side.

Evaluation in Switzerland from September 1944

In November 1943, at the invitation of the Reich Aviation Ministry , a Swiss delegation traveled to Berlin, where radio measuring devices were demonstrated and the sale of two units was promised. The War Technology Department (KTA) of the Federal Military Department (EMD) informed the Air Force in September 1944 that two Telefunken radio measuring devices could be tested in Switzerland. After a test set-up, employees from Telefunken Berlin and an RLM expert were called in to instruct the operating personnel.