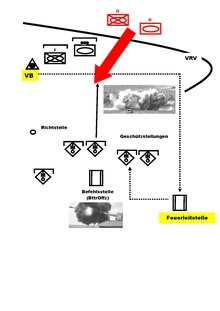 US gun crew at the Grafenwoehr training area

Fire control was of particular importance in conventional artillery , which usually works through the combined fire of several guns. Here the fire orders or fire commands are implemented by the fire control centers in fire commands (see below) to the weapon systems. Fire control is also common with any other troop, especially combat troops, at least at the beginning of the battle .

The fire control officer or fire control unit converts fire orders from the combat troops into fire commands for the gun crews. A battery fire control system with a laser range finder works with weather sensors (wind force, temperature, etc.), radar devices and V 0 measuring radar devices . The fire commands can be transmitted by radio or wire. Other important data is the distance to the target, the position of the target, the type of target (e.g. buried Mot runners in position, combat vehicles, etc.) and the position relative to the firing position of the guns.

The following fire control computers have been used in the history of the Bundeswehr :

The artillery computer type BUM was the first electronic fire control computer for the army of the Bundeswehr .

The conversion of the fire control centers from the analog computer BUM 11 to the digital computer "Falke" took place in 1978. The new device was based on troop tests in the 1970s . The fire control computer FALKE TR84, the structure of a tube computer , its calculations u. a. based on the earth's rotation , was originally developed by the AEG company for fire control in armored artillery . Together with the ObPzArt , FALKE was part of the IFAB system (Integrated Fire Control Artillery Battery), the forerunner of the FüWES ADLER. The FeuerleitPzArt, an M113 , is present in every field howitzers / self-propelled howitzers that are firing and worked with the FALKE TR84 fire control computer. The fire control officer entered the following data into the FALKE TR84 fire control computer: target coordinates, gun coordinates, weather report (METCM) and the powder temperature of the propellant charges. From this, the FALKE system calculated a special fire command for each individual gun, taking into account the direction of fire (partial ring) and elevation. In contrast to the analogue artillery computer type BUM, the digital artillery computer FALKE was able to determine shot values ​​very quickly with the aid of a computer. The weaknesses of the system, however, lay in the fact that it was partly computer-based and partly with field cables . In addition to the Bundeswehr, the Syrian army also used the FALKE TR 84 artillery computer.

FALKE TR84 was organized in the basic structure of a management system as follows:

A gun platoon fires a group until a new fire command is given via radio data transmission in the fire control center of the VB. As soon as the guns report that they are ready to fire, the FALKE fire control computer counts down from five to one, which triggers another group of projectiles to be triggered. The VB reports the effect of the fire: "Enemy combat reconnaissance smashed, fire pause, end." The gun platoon then moves into a new firing position.

The ADLER command and weapon deployment system (FüWES) represents a further development ( artillery, data, situation and deployment computer network ) for the optimal interaction of the areas of leadership - reconnaissance - effect in the artillery system network. Through automated data processing support through secure transmission It provides the prerequisite for the efficient use of artillery troops in a mobile battle. The FüWES ADLER maps the structure of the artillery in a network which, in addition to the reconnaissance systems, weapon deployment systems and active agents, also includes the command elements at all levels of the artillery.

ADLER can integrate the following components: