The Wigeon ( Mareca penelope , Syn. : Anas penelope ) is a kind from the family of ducks (Anatidae). Their breeding area extends in the north of Eurasia from Iceland to the Bering Strait. Before the onset of winter frost, the wigeons migrate in flocks to East Africa, Central India and Indochina.

The breeding population of Europe is estimated at 300,000 to 360,000 breeding pairs, while the European winter population comprises more than 1.7 million individuals. The wigeons can be observed in Central Europe especially in winter, when they are found in large numbers on the coast. There are also isolated wigeons and a small Western European breeding population in the Netherlands and Schleswig-Holstein, which only amount to 35 to 60 breeding pairs. Overall, an increase in the West Siberian-North European population can be identified, which is a result of reduced hunting, an extensification of salt marsh grazing and increasing dykes on the coasts and the resulting greater supply of samphire areas.

Drake of the wigeon, the white longitudinal band and the metallic green surround of the wing mirror are clearly recognizable 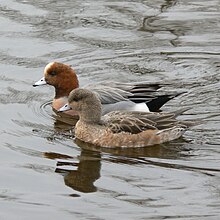 Wigeon pair; in front is the female

The sexes show a clear gender dimorphism . The most striking feature of the male in the splendid dress is the red-brown head, which has a white to creamy yellow pallor on the forehead that continues to the base of the beak. In the male breast is gray pink, while the rest of the body plumage is pale gray. The ventral side is whitish to cream colored. The wings have a white wing band formed by the wing cover feathers, which is visible as a white longitudinal band in swimming drakes. It stretches from the shoulder to the side of the body. In contrast, the metallic green border of the white wing mirror can only be seen as a small spot in swimming males. The tip of the gray-blue beak is black. When resting, males and females are similar.

The female, on the other hand, has an inconspicuous brownish color all year round. The plumage on the chest and the front parts of the body is rather dark brown. The head and neck, on the other hand, have reddish brown plumage. The sides of the body are lightly banded and become lighter towards the white belly. The longitudinal band, which is white in the male, is light gray in her. Similar to the male, the beak is gray-blue. However, it lacks the black tip. The extremities of both sexes are gray-brown to almost black.

Flying wigeons are easy to recognize by the wide white field that runs across the front wings. The dark green mirror is set off in white at the front and back. The wings of the hand are dark gray-brown. The tail is pointed and dark, the belly is set off in white. The flight is fast and wigeons often fly in flocks.

The downy chicks of the wigeon are very similar to those of the mallard . However, they are a bit brown and their downs are a bit longer. They also lack the dark line of color from the base of the beak over the eye to the neck, which is characteristic of the Dunenküken of this species. However, some downy chicks of the wigeon have a line of color below the eye. The underside of the body is cream-colored to light brown. At the time of hatching, the downy chicks have a black-gray beak with a red-brown nail. The feet and legs are olive gray, the webbed feet are black. The beak, legs and feet of growing wigeons become increasingly lighter until they are blue-gray.

Wigeons are very fiery ducks. It is the call of the male that led to the German name of the species. The male often introduces his short, sharp, two- to three-syllable whistling wiu calls with a krr krkrkrr . The wiu calls can also be heard during the night and are a conspicuous indication of the presence of the species. For the female, hard, rattling rerr and war-warrr calls are characteristic, which sound in different variations, but are often stretched or strung.

Flying wigeons can be recognized by their high-pitched, whistling sounding flight noise, which is generated by the wings.

In Europe, the wigeon is a regular breeding bird in Iceland, Scotland, northern England, Norway, northern and central Sweden and large parts of Finland. The northern limit of their European brood distribution is reached on the Kola Peninsula . It also breeds irregularly in Wales and the east of England. In the north of Central Europe it is a rather rare breeding bird. Individual broods have been observed in the Netherlands, Jutland, northern Germany and Poland. In its main breeding areas it breeds on lakes and ponds rich in vegetation and, to a lesser extent, on slow-flowing rivers of the taiga.

Large numbers of them can also be observed in Central Europe on their migration and in winter. It prefers shallow waters during migration and can then also be observed in flooded lowlands. In the coastal areas of Belgium and the Netherlands, the wigeon population is almost 100,000 individuals. During this time, thousands of them can be observed in suitable places on the German coast. Hundreds of these ducks can even be found occasionally on Lake Constance. Great Britain is one of the most important wintering spots. Here the winter population is between 150,000 and 250,000 wigeons. Another 30,000 to 40,000 overwinter on the coast of Ireland. As pure vegetarians, they spend a large part of their activities looking for food in winter. Together with other geese and ducks, they find themselves in coastal meadows. During this time they are particularly often associated with brent geese . Because of the significant amounts of plants these animals ingest, there are occasional problems with farmers.

The wigeons' preferred breeding grounds are wetlands in the taiga region with lakes and ponds rich in vegetation. However, it penetrates into the Strauchtundra. In contrast, it avoids dense forest regions and mountains.

Wigeons are diurnal as well as crepuscular and nocturnal. They can see exceptionally well at night because the back of the eyes contains a layer that reflects light. The actual optic nerves are hit twice by the light. Wigeons are sociable and can always be found in larger groups.

Wigeons generally have a purely vegetarian diet. Foraging takes place at dusk and in the dark. In addition to aquatic plants, the food spectrum also includes grasses, seeds and herbs on land. It does not specialize in specific plants or parts of plants. You need between 300 and 400 g of food per day. To do this, they spend almost 15 hours a day. Wigeons occasionally deviate from this purely vegetarian diet when their habitat contains a particularly large number of insects. This occurs, for example, on Lake Myvatn and in parts of Russia.

The wigeon is very adaptable in its diet. In their British wintering area, the wigeons mainly fed on seaweed ( Zostera ) until the early 1930s . After the seagrass stocks there fell sharply due to a plant disease, the wigeons increasingly found themselves at rest areas inland, where they took up grass and seeds as well as algae in brackish waters near the coast. Grains made up up to 10 percent of their diet.

Otherwise, wigeons are also very adaptable in their diet. Influence on changes in eating habits are related to the energy content of the respective food plants. Wigeons that overwinter in the Wadden Sea around the West Frisian Islands and in the delta area of ​​the Rhine mainly eat salt marsh plants and algae from September to November. Then they switch to grassland plants such as fescue , bluegrass and ryegrass . 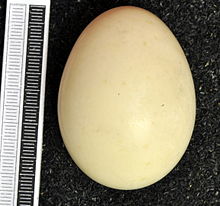 The wigeon reaches sexual maturity at around two years of age. The pair formation usually takes place shortly after the end of winter, the actual breeding season extends from May to July. Laying usually does not begin before mid-May and often takes place towards the end of this month or at the beginning of June. In their northern areas of distribution, the beginning of the breeding season essentially depends on when the snow and ice melt begins.

Wigeons are ground breeders. The nest is created in the protective bank thicket and padded with feather down. The female usually lays six to ten eggs that are almost 50 mm long. The incubation period is about 22 days. The male stays close to the breeding female all the time. The eggs are hatched after about 24 to 25 days. Downy chicks hatch from around seventy to eighty percent of the eggs. The chicks hatch in quick succession within a few hours. Shortly after hatching, the chicks leave the nest as fleeing nests and follow the mother bird into the water. The flight ability is reached after about 45 days. Only about 50 percent of the hatched young birds also fledge. The main causes of mortality in young birds are bad weather and predators.