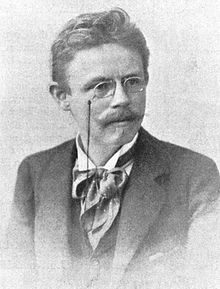 Max Halbe was born as the son of a West Prussian landowner in Güttland near Danzig. Beginning in 1883, he studied law in Heidelberg , moved in 1884 to the Faculty of Arts in Munich, where he was - after a few semesters in Berlin - 1888 with a dissertation on "Relations between . Frederick II and the Holy See " Dr. phil. PhD . He then settled in Berlin as a freelance writer . In 1893 his play Jugend appeared , which, along with Gerhart Hauptmann's play Die Weber, became the most successful naturalistic drama.

In 1895 Halbe moved to Munich and founded the Intime Theater for Dramatic Experiments . He also became a co-founder of the Münchner Volksbühne . This is where the personal connection to Ludwig Thoma came about . Halbe also cultivated a friendship with Frank Wedekind , which, although permeated by numerous tensions, lasted until Wedekind's death in 1918. Halbe gave the funeral oration at the funeral service. Halbe was also friends with the late impressionist painter Albert Weisgerber , one of the most important graphic artists for the magazine Die Jugend . Weisgerber also made a portrait of Halbe from 1909. He was also in close contact with Lovis Corinth , who created several pictures of Halbe and his wife Luise .

Towards the end of the 1890s, the poet increasingly began to turn away from naturalism. From this time onwards, Halbe tended towards neo-romanticism in terms of style and choice of topics, as had already been announced by the predominantly lyrical tone of voice in his youth and other theater pieces in his early creative period.

Although Halbe continued to focus primarily on the stage and the later plays (e.g. Der Strom ) show a clear further development compared to the early ones, he was not able to celebrate a success with any of them comparable to that of youth . As a result, he also turned to larger narrative works and wrote several novels, such as Die Tat des Dietrich Stobäus or Consul General Stenzel and his dangerous self , in which he particularly concentrated on the development of the trains of thought of his characters. Important source works on the history of German literature, especially naturalism, are the two autobiographies Scholle and Schicksal. Story of my life from 1933 and the turn of the century. Story of my life 1893–1914 from 1935.

After the “ seizure of power ” by the National Socialists in January 1933, Halbe, like Gerhart Hauptmann, did not publicly oppose the new rulers and stayed away from politics. But on October 22, 1933, he signed the pledge of loyal allegiance to Adolf Hitler .

As one of the few writers of importance who remained in Germany, the Nazis tried to reclaim him for themselves. In the final phase of the Second World War , Adolf Hitler included him in the God-gifted list of the most important writers in August 1944 , which seriously damaged his reputation in post-war Germany and led to his works being largely disregarded.

Max Halbe was an honorary citizen of the city of Danzig. On the occasion of Max Halbe's 75th birthday, the city donated the City of Danzig Literature Prize, which it also called the Max Halbe Prize. The prize, endowed with 3,000  Reichsmarks (inflation-adjusted in today's currency: around 12,000 euros) was only awarded once due to the war. Ottfried Graf Finckenstein (for returning home to Reiherberg ) and Walter Sperling (for water nights ) were the winners in 1942.