The title of this article is ambiguous. Further meanings are listed under Nazi (disambiguation) . 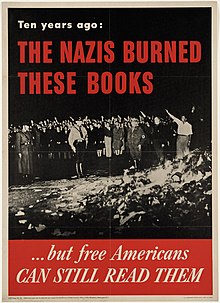 Nazi is an acronym for a supporter of National Socialism . Today it is used colloquially mostly derogatory and sometimes also to designate fanatics of other kinds.

Nazi was originally a pet form of the given name Ignaz , which was common in Bavaria and Austria . For example, Ludwig Thomas Bauernschwank's The Shoemaker Nazi premiered in 1905 in the Theater am Gärtnerplatz in Munich. The term was used disparagingly for a simple-minded, foolish person and for German-Austrians and German-Bohemians .

"If one understands by the 'Nazi' the German-Austrian and German-Bohemian, then it is a grave injustice to hold him responsible for the failure of the Habsburg ally."

In 1926 the journalist and writer Kurt Tucholsky used the term in a review of Schweik in this sense:

"If the German-national student could read and read this book, he would be quick to say, for example: 'Such a field curate certainly never even existed with the Nazis.'"

In February 1930, Tucholsky first applied the term to National Socialists:

“The deep blood relationship between these judges and everything that is called the military is evident; you saw that again from the last trials against the Nazis. "

In the Illustrated Lexicon of German colloquial language by Heinz Küpper , 1984, in line with the Historical Dictionary of German Figurative Use by Keith Spalding (Oxford 1984): "The abbreviation 'Nazi' referred to the ' National Socials' under Friedrich Naumann in 1903. " The The first known use of the word National Socialist is even older, according to the language advice service of the University of Vechta ; so proved Cornelia Berning - in the Deutsches Adelsblatt 1887 under the heading Prince Bismarck the first National Socialist .

On behalf of the United States Office of War Information (OWI) out given Posters: What Nazis think of German-Americans - "What Nazis of German Americans hold" on a speech by Gustaf Braun von Stumm reference.

From around 1930 the term was used in analogy to Sozi ( socialist or SPD or SPÖ supporter) more sharply distanced for the supporters of Adolf Hitler . After the Second World War , the word denazification was created , which primarily meant the systematic removal of National Socialists from public office .

The neo-Nazi composition today denotes a supporter of National Socialist ideas who did not experience the Nazi era themselves; Old Nazis , on the other hand, did not abandon their views after 1945.

In Switzerland, for example, in Basel and Zurich published until 1976 left-liberal National-Zeitung , a precursor Journal of the Basler Zeitung , commonly known especially in the children's supplement as Nazi Zyttig referred, as well as the Swiss national football team as a national team is called which is only pronounced with a slightly shorter vowel a than in Nazi . Neither has anything to do with the designation as a National Socialist.

In Anglo-Saxon (and international) linguistic usage , the short form Nazi is found much more often than the original words and is also used to denote the politics , ideology and warfare of the time.

For example, the voice information from the University of Vechta announced : “A few Nazi documents for the period after 1945, mostly indications that the word can be found as a foreign word in English, also in French or Turkish, are offered by the Society for German Archives language . in Wiesbaden [...] "in the Cologne Rundschau of 18 September 1998 was an article about German foreign words in American English , among other things, the following section included:" a strange career has [...] made the word Nazi '. In the northern US states it is understood to be any kind of fanatic. A 'tobacco nazi' is a passionate smoker, a 'jazz nazi' is a jazz fetishist. “Colin McLarty from Case Western Reserve University (Cleveland, Ohio) called this representation partially wrong and noted that a tobbaco nazi is not someone who likes to smoke, but instead rigorously enforces compliance with smoking bans . A jazz nazi is not just a passionate jazz lover, but intolerant of any other kind of music. One should therefore translate the American-English word Nazi , which is anything but “value-free”, with “fanatic”, “extremist” or “fundamentalist”.

According to media reports in 2015, jargon terms such as “ grammar nazi ” triggered state investigations in Russia due to linguistic misunderstandings.