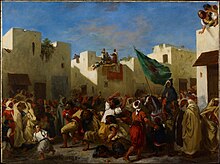 The Fanatics of Tangier
( Eugène Delacroix , Minneapolis Institute of Arts )

As fanaticism (of fr: fanatique or lat .: fanaticus ; divinely inspired ) refers to the obsession of an idea , stubbornness , idea or belief ( "a fanatical supporter of ideology or grouping").

Fanaticism in the narrower sense is characterized by the unconditional acceptance of the idea in question and mostly by intolerance towards any dissenting opinion.

The fanatic often wants to convince others of his views (“ missionary zeal”), but for his part leaves no room for doubt as to the correctness and special value of his convictions. Rather, he defends them against any questioning and is not amenable to reasonable argumentation . The idea in question is withdrawn from his critical thinking or ability to reflect . The associated negative consequences for oneself or others are not recognized or recognized as such.

Forms of beliefs that are often fanatical about include: a. Ideologies , extremism , racism , fundamentalism and religious fanaticism .

The term “fanatic” must be distinguished from the term “ fan ”, which is used less to denote extreme positions and more to denote “ enthusiasm for ... ” and does not primarily mean a political, ideological or religious conviction . B. Exuberant enthusiasm for athletes or pop artists .

According to Robert Spaemann , since the 17th century western civilization had the negative word “fanaticism” ready for unconditional convictions that defy universal discourse. This term was used by Catholics against Protestants and later by Orthodox Protestants against enthusiasm and finally by the protagonists of the Enlightenment against any form of revelation belief.

The extent to which extreme attitudes or ideologies find supporters, or whether they become mass movements , depends on various factors. Particularly important in this context are the economic and social situation, but also the socio-psychological situation of the social groups concerned. In certain historical situations - in times of economic crisis, when large sections of the population feel oppressed or not recognized or perceive their situation as having no prospects - people are particularly susceptible to extreme ideologies, especially if they are supported by demagogically gifted, charismatic leaders such as B. Adolf Hitler , Benito Mussolini or Josef Stalin are represented.

Examples of such mass movements are German National Socialism , Italian fascism , Russian Bolshevism and medieval crusaderism , but also groups such as the Jewish Zealot movement ( Bar Kochba ), the RAF and various radical Muslim groups (including al-Qaeda , the IS movement etc.). This so-called fanaticism is often based on “a surplus. [...] It is the power of the 'we-feeling' [...]. It is not a 'bad' feeling, but an enthusiastic one, for example in the mystical rituals of Woodo congregations, Pentecostal churches, Sufi dances, pilgrimages, but also in a weakened form at Friday prayers or masses.

In almost every historical epoch there have been people who were obsessed with their convictions, developed missionary zeal and founded social, political or religious movements. Whether this leads to desirable innovations or undesirable developments depends on the convictions or beliefs concerned. Important and influential personalities of the past such as the American revolutionary Paul Revere or the South American Simon Bolivar can also be considered fanatics in this sense.

Fanaticism from a psychological perspective

The following important information is missing from this article or section:
There is no clear distinction between fanaticism and mental disorder. Is there also “healthy” fanaticism, or is fanaticism always a sign of a clinical disorder?
Help Wikipedia by researching and pasting it .

From a psychological perspective, fanaticism is one of those phenomena in which - on the basis of certain constellations of personality traits - partial aspects of life are excessively idealized , i.e. H. are overestimated emotionally (see e.g. idolization , fetishism or behavioral addiction ), which is usually at the expense of balanced, realistic self-regulation . This can lead to a considerable one-sidedness of the lifestyle and, not least, tensions with partners or caregivers can arise.

“Fanatics of all stripes know no ambivalences, no compromises and no dialogue. They would condemn this as a betrayal of their sacred cause. Their whole everyday life is determined by a fixed, "overriding" idea, the incontrovertible truth of which they are permeated and which gives their thoughts, feelings and actions great moral significance. "

Fanaticism is often related to other personality traits (see e.g. authoritarian character ). Above all, there are intolerance , lack of humor and lack of self-irony . Fanaticism is therefore often the first sign of the presence of clinical-psychological disorders.