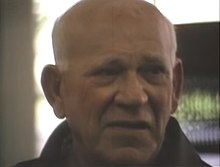 Eric Hoffer (born July 25, 1902 in New York City , † May 21, 1983 in California ) was a socially critical American philosopher and author. He has presented his ideas in ten books, the first of which, The True Believer , is considered by both himself and critics as his best and most important. In February 1983 he was awarded the Presidential Medal of Freedom by Ronald Reagan .

Hoffer was born in New York City to an Alsatian immigrant. At the age of seven he could read English and German, but went blind after his mother fell down a flight of stairs with him in her arms. At the age of fifteen he regained his sight. Afraid of going blind again, he began to read as much as possible. He did not lose his eyesight , but he kept the habit of reading a lot throughout his life.

After the untimely death of his parents, Hoffer looked for a job that would give him enough time to read. He went to California , where (according to rumors) he was banned from military service for medical reasons. His deep rejection of National Socialism motivated him to work on the construction of warships in the San Francisco Naval Shipyard . During this time, he began his lifelong habit of developing extensive literary skills alongside his work as a casual worker (later in agriculture, as a gold prospector or dock worker). After finding Michel de Montaigne's essays in a second-hand bookstore by chance , he felt called to write.

Hoffer was one of the first to recognize self-esteem as central to an individual's psychological well-being. In contrast to the benefits of high self-esteem that are emphasized today, Hoffer looked at the consequences of a lack of self-esteem. He tried to understand the causes of totalitarian mass movements (exemplified in Hitler's National Socialism and Stalin's Soviet Communism ) from the psychological makeup of the respective followers. In general, he saw fanaticism and self-righteousness caused by insecurity and self-doubt. As he explains in The True Believer , according to his observations, people compensate for the empty content of their own life by passionately turning to the outside world or a leader person or ideology. Although Hoffer developed his ideas primarily on the totalitarian mass movements of his time, he did not shy away from calling less extreme movements of religious or political orientation as contact points for insecure people.

Hoffer's theses were not only new, but without any reference to the psychological teachings of his time (Freudian psychology). Admirers of Hoffer's ideas attribute the originality of his ideas to his independence from the academic world and freedom from constraints.

Hoffer and the "intellectuals"

Hoffer was one of the most affectionate writers in his day to the United States. He did not see himself as an " intellectual ", especially since he understood the term negatively for anti-American academics. In his view, academics were primarily power-hungry and compensated for the denial of power in democratic (but not totalitarian) states by making themselves important through excessive criticism.

Hoffer himself saw his own background from a humble background as encouraging. He saw himself as an outsider and understood outsiders as pioneers of society. Although he was clearly critical of left-wing academics, he cannot be called a conservative. He stood outside the currents of his time and saw himself as a dock worker, whose writing was brought about from his living conditions. Perhaps that is why he had a special sympathy for another great outsider in academia, Hannah Arendt .