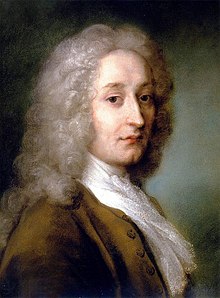 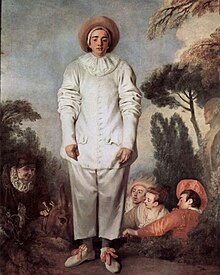 Mezzettino (with baroque guitar ) by Antoine Watteau, acquired from Tsarina Catherine the Great in 1767; sold to Calouste Gulbenkian in May 1930 , sold to the Metropolitan Museum in New York City in 1934 .

Jean-Antoine Watteau (born October 10, 1684 in Valenciennes , † July 18, 1721 in Nogent-sur-Marne ) was a French Rococo painter . With his fêtes galantes he created a new genre of images at the beginning of the 18th century.

Antoine Watteau was the second of four sons of Jean-Philippe Watteau (1660-1726) and his wife Michelle Lardenois (1653-1728). At the age of ten he became an apprentice to the painter Jacques-Albert Gérin in his hometown.

After he went to Paris around 1702, he initially worked for picture dealers in order to earn a living, until he became acquainted with Claude Gillot , who took him in as a pupil and from whom he took over the preference for representations from plays . But Watteau only worked for a short time at Gillot. From this he went to the decorative painter Claude Audran III , the administrator of the Galerie du Luxembourg , on whose behalf he painted numerous wall decorations, so-called panneaux , whose ingenious compositions have only been preserved in reproductions through engravings.

In the Palais du Luxembourg he also studied the paintings by Rubens , whose love garden was also the model for Watteau's fête galante . Around 1708 Watteau became a student of the Royal Academy of Painting and Sculpture and applied for a scholarship, the Grand Prix , at an exhibition in Rome, but only received the second prize the next year. Then he went to his hometown, from where he returned to Paris around 1711.

At the suggestion of the painter Charles de La Fosse , he applied for membership of the academy and was also admitted, but was only accepted as a member in 1717, as he had the required picture (the embarkation for Kythera , 1717, oil on canvas, 129 × 194 cm, Musée du Louvre , Paris) only submitted this year.

Around 1716 the art collector Pierre Crozat took him into his house, where his large collection of hand drawings opened up a rich source of study for him, and where he made the acquaintance of art connoisseurs such as Mariette , Count Caylus , Jean de Julienne and others. In the autumn of 1720 he made a trip to London, from which he returned in early 1721.

At the age of 36, the painter Antoine Watteau died of tuberculosis on July 18, 1721 in Nogent-sur-Marne near Vincennes .

With his shepherd's plays (shepherd's scenes), gallant festivities , rural amusements and actors' representations, he founded a new genre of painting ( Watteau painting ) and, through his figures, whose costumes he mostly borrowed from the Arcadian shepherd's plays of the theater, had an influence on the fashion attire of himself and his later ones Time exercised. Even in his day, the hairdressing à la Watteau appeared, which was later joined by entire costumes à la Watteau, the Watteau bonnets, the negligés à la Watteau and much more.

With great certainty and liveliness of the drawing, he combined a witty and light, if at times fleeting brushwork and a finely developed feeling for nature, which is particularly evident in the landscape backgrounds of his paintings. Most of Watteau's paintings (19) are in the possession of the Prussian Palaces and Gardens Foundation Berlin-Brandenburg (in Charlottenburg Palace and in the New Palace in Potsdam), bought by Frederick the Great , including a repetition of the embarkation with a different composition to Kythera , the love lesson, a rural pleasure, the dancing Iris and the company sign of the art dealer Gersaint, and soon in the Louvre in Paris (The Misstep, La finette, l'Indifferent, The Italian Harlequin Gilles and The Society in the Park). A large number of Watteau's paintings are also in private English ownership (the most outstanding in the Wallace Collection in London ).

Of his other works, the Italian and French comedy and dance in the Gemäldegalerie Berlin , two gallant outdoor celebrations (in the Dresden gallery), the young Savoyarde and the minuet (in the Hermitage in St. Petersburg ), the Village wedding (in the Soane Museum in London), the ball and the hunting party (in Dulwich College near London).

The vast majority of Watteau's artistic work (almost 800) are by Claude Audran III , Pierre Aveline , François Boucher , Anne-Claude-Philippe, Comte de Caylus , Charles Nicholas Cochin , Gabriel Huquier , Larmessan, Jean-Baptiste Scotin , Simon Thomassin among others been engraved (a selection of them mechanically reproduced on 60 plates in decorations and paintings by A. Watteau , Berlin 1888). His style of painting was continued for a while by his students Nicolas Lancret and Jean-Baptiste Pater .

This four-volume corpus is one of the most important, most famous and rarest graphic works of the 18th century. It is named after Watteau's friend and patron Jean de Jullienne (1686–1766), whose concern was to preserve and document Watteau's art with this catalog raisonné. 621 etchings were published between 1726 and 1735 as enormously expensive splendid volumes in 100 complete sets. The French King Louis XV. owned 10 copies of this work. In order to be able to sell the sheets individually, numerous anthologies were later dismantled. The first two volumes appeared in 1726 and 1728 and contained Watteau's 350 detailed drawings for paintings on excellent oversized paper quality ( grand jésus format ). To this end, Jullienne employed 13 engravers, including Jean Audran and François Boucher . Jullienne herself made 20 etchings. Volumes 3 and 4 were finally executed with 16 of the best engravers in France, including Jacques-Philippe Le Bas , Louis Crépy, Charles Nicolas Cochin and Jean Audran's son Benoit. The grand aigle format was even larger, as the paintings themselves became the subject matter.

Statue of Watteau in Valenciennes

Since the 18th century there have been various positions in the reception of Watteau's work. After the artist's death, his friends and acquaintances tried, inter alia. the aforementioned Comte de Caylus for a detailed account of his work and life. His contemporaries described his works primarily as "cheerful" and "cheerful". Nonetheless, Watteau's work fell into oblivion in the decades that followed. Only the romantic, melancholy look at his pictures in the 19th century, for example through poems by the brothers Edmond and Jules de Goncourt , brought him back to the art world. The historicizing idea of ​​Watteau as a suffering and lonely artist was present until the 1980s. It was supported by the difficult to read, “mystical” imagery of the artist and by the fact that he died of consumption. In the 1980s, the primarily visible subject of love in the Fêtes Galantes was taken up again . Since the 1990s, a large number of scholars have supported the point of view that the aspect of gallant love in Watteau's picture content can be read ambiguously. On the basis of gallant conversations, the painter composes a “semantic vacuum” using gestures and facial expressions in not clearly legible constellations of figures.

In 1984/85, on the occasion of Watteau's 300th birthday, a catalog was created in collaboration with the cities of Paris, Berlin and Washington (see literature), which lists countless international exhibitions on 4½ thin pages; the earliest: London 1798/1799.

The French feature film The Vanishing Point by Laurent de Bartillat uses an art-historical approach to Watteau's work as part of the plot and proposes a thesis on Watteau's private life.

The Diogenes Verlag is since 1985 on the front page of Patrick Suskind's novel Perfume a section of Watteau's Jupiter and Antiope (see. Jupiter , Antiope ) - the armpit of a naked sleeping as a symbol of fragrant seduction.