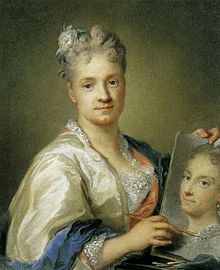 Rosalba Carriera's talent was discovered and promoted at a young age by her father, Andrea Carriera. Her first teacher was Giuseppe Diamantini. She studied at the Roman Accademia di San Luca and then with Antonio Balestra in Venice. The painter Christian Cole, who made her work known in Rome, advised her to switch from oil paints to pastel pencils, with which she found her style. At a young age she mainly created miniature painting , later more and more pastel painting . She mainly painted half-figures , heads of Christ , Mary as well as mythological and allegorical figures. Celebrated and admired she toured Europe and was a welcome guest at many courts . She was in Paris in 1720/21, in Modena in 1723 , and in Vienna in 1730 .

After the death of her sister Giovanna († 1737) and her mother a year later, Carriera was so desperate that she could no longer work and had to be persuaded to take on jobs again. An eye disease also made itself more and more noticeable; painting became more and more arduous. Despite some painful eye operations, the painter went blind in 1746. Carriera was cared for by her only surviving sister, Angela, and she lived for another eleven years - not falling into madness, as is often claimed, but in her own words in the “darkest blackest night”. Rosalba Carriera died on April 15, 1757, blind and in deep sadness in Venice.

Her works can be found in Dresden, Venice, Vienna, Munich ( Alte Pinakothek ) and Paris. They are created in the spirit of the Rococo and are characterized by their softness of color and great grace. 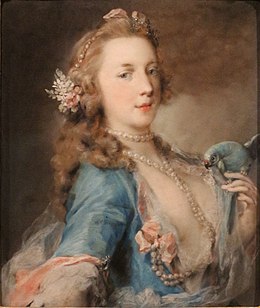 Wikisource: Rosalba Carriera in the catalog of the Royal Picture Gallery in Dresden (1887)  - sources and full texts