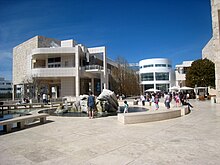 Courtyard of the Getty Center in Los Angeles

Satellite view of the Getty Center

The building complex was designed by the American architect Richard Meier , who was commissioned with the design in the mid- 1980s . Construction began in 1991 and lasted until 1997. The landscape architecture firm Olin Partnership from Philadelphia and the landscape architect Robert Irwin are responsible for the landscaping. Robert Irwin is responsible for the central garden, while Lauri Olin planned the other gardens together with Richard Meier.

At the J. Paul Getty Museum , billionaire J. Paul Getty has collected around 50,000 works of art and made them available to the general public free of charge. The selection focuses on classic works of art such as sculptures, paintings, drawings, manuscripts and photographs. The antique collection, which is exhibited in the Getty Villa , a replica of the Villa dei Papiri in Herculaneum , further west on the Pacific coast has been outsourced.

The Getty Center has its own exit on Interstate 405 from Los Angeles International Airport to the north ( San Fernando ) and can be seen lying on the mountain from afar. From there you have views of the Pacific Ocean , the mountains of Big Bear City and the lowlands of Los Angeles on a clear day .