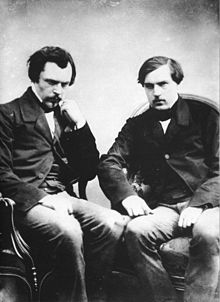 The Goncourts embodied a type not so rare in the 19th century: that of the author tandem. You are considered to be the founder of the literary current of naturalism .

Shortly before the revolution, her great-grandfather Antoine Huot bought his way into the nobility by purchasing a manor (French: seigneurie ) called Goncourt , her grandfather Jean Huot de Goncourt, a lawyer, was a member of the short-lived estates of 1789 and later a high judge. Her father, who died a few years after Jules was born, was an officer under Napoleon . Both brothers graduated from high schools in Paris, Edmond studied law and worked for several years in the Treasury .

In 1849, after their mother's death, they inherited a significant fortune and Edmond gave up his career. Both now lived for their interests, drawing, painting, writing and moving in the Parisian literary scene. In addition, although Jules was infected with syphilis in 1850 and has been ailing since then, they began to take longer journeys, recording their impressions in travel diaries. In autumn 1860 z. B. They traveled to Germany, including Berlin .

Above all, however, despite the age difference, they always worked together as authors: art critics, theater critics, historians, dramatists and, above all, novelists. Here they had the idea of exemplifying the doctrine of contemporary positivist philosophy in their novels , according to which humans are primarily determined by their genetic makeup (la race), their time (le moment) and their social environment (le milieu). With this they created a literary school, naturalism.

Her most important novels are Les hommes de lettres (1860), the story of a writer in his milieu; Sœur Philomène , the story of a nurse in her everyday life (1861); Renée Mauperin (1864), the story of a young upper-class woman in her milieu; Germinie Lacerteux (1865), the story of a maid who, as it were, ideally experiences all the good and bad that can happen to a maid (e.g. that she is unscrupulously exploited by the man she loves and ultimately sinks into debt); Manette Salomon (1867), the story of a woman in an artistic environment.

In 1865, however, her attempt as a playwright remained unsuccessful: the three-act play Henriette Maréchal was chosen because of her well-known closeness to Princess Mathilde, a niece of Napoleon III. , booed by young, republican parts of the audience and removed after a few performances.

A first-rate cultural-historical document is the diary (journal) that the brothers kept from the end of 1851 and that Edmond continued alone for twenty-five years after Jules' early death (1870). Because of the malice it pours over fellow writers and many indiscreet details, Edmond only brought out an adjusted version during his lifetime (nine volumes from 1887 to 1896). A preprint of excerpts that appeared in Figaro in 1885/86 had triggered a scandal and brought him a lot of hostility, even among former friends.

As early as 1874, Edmond decided in an initially secret will to use his fortune to found a ten-member academy whose mandate was to publish the journal in full 20 years after his death . Members should only be authors who did not belong to the Académie Française . In 1903, after the heirs had contested the will and the statute of the new academy had been officially approved, the members decided to award a literary prize that is to honor a newly published French-language novel every autumn: the current Prix ​​Goncourt , which is intended for the most coveted and most effective of the numerous French literary prizes.

Thomas Mann described the novels of the Goncourt brothers, especially Renée Mauperin , as a crucial inspiration for the writing of his Buddenbrooks .

After the death of Jules (1870) Edmond wrote the following novels alone:

Edmond's late work, two monographs on artists of the Japanese color woodcut , made a significant contribution to popularizing this art form in Europe.

Edmond de Goncourt published a selection in nine volumes from 1887 to 1896 under the title Journal . Since the heirs of Alphonse Daudet (who had been appointed as administrator) prevented the publication of the complete diaries in France, they could only appear outside of French jurisdiction in Monaco from 1956–1958. The 22 volumes were edited by Robert Ricatte on behalf of the Académie Goncourt. For a long time there were only selected issues in German. A complete edition in October 2013 Haffmans Verlag in Zweitausendeins published