Dubarry and Madame Dubarry are redirects to this article. Further meanings are listed under Dubarry (disambiguation) . 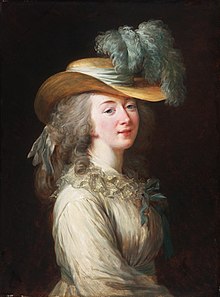 Marie-Jeanne Bécu came from a poor background. She was the illegitimate daughter of the seamstress Anne Bécu and - presumably - the Franciscan Jean Baptiste Casimir Gomard de Vaubernier. When she came to Paris, she first worked in the Labille fashion house and later as a courtesan . She worked under the name Mademoiselle Lange in Madame Gourdan's establishment . She caught the eye of Count Jean-Baptiste du Barry , who planned to convey the 18-year-old to the king as mistress in order to increase his own influence at court. To make her acceptable , he forged her birth certificate and unceremoniously married her on September 1, 1768 to his brother Guillaume du Barry (1732-1811) in order to cover up her origins. On April 22, 1769 she was introduced to the court as a nobleman.

Soon she could see the aging King Louis XV. conquer with its beauty, charm and youthfulness, praised by numerous contemporaries. She got her own living quarters in the Palace of Versailles and the former Pavillon des Eaux in the nearby Louveciennes . In addition to generous subsidies , she received gifts in the form of jewels from the king, as well as the slave Louis-Benoit Zamor . After the bourgeois mistress Pompadour, the du Barry was considered a new, even bigger scandal at court. Because of her origins, she was attacked by many courtiers. Among their greatest opponents were the Duke Étienne-François de Choiseul , the then finance minister, and his sister, who themselves hoped for a close relationship with Louis XV. had made. The rejection and the intrigues bothered the countess very much, as she was known as a very generous and warm-hearted person. People who treated her with kindness could always count on her friendship and support. 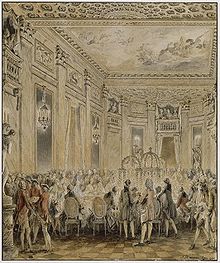 Festival in Louveciennes, which was given on September 2, 1771 (painting by Jean-Michel Moreau )

Madame du Barry's influence at the court of France was - in contrast to her predecessor Madame de Pompadour - more or less limited to personal intrigue. She was instrumental in the overthrow of the Duke of Choiseul . At the wedding celebrations of Louis XVI. and Marie Antoinette , against the opposition of the court, she took part at the side of the king. But the couple heir to the throne also rejected the mistress from the start.

On his deathbed in 1774 the king ordered her to be exiled to a monastery. He made this decision probably under pressure from his confessor and out of concern for his soul, although Madame du Barry had cared for him self-sacrificingly to the end, ignoring the risk of smallpox infection. His successor Louis XVI. followed the order. The Countess was brought to the Pont-aux-Dames Abbey in Couilly , where she lived for more than a year before she was allowed to move to her home in Saint-Vrain (Essonne) in October 1775 . In 1776 she returned to her palace in Louveciennes near Versailles on royal orders.

After the outbreak of the French Revolution , their castle was robbed in January 1791. Since the king's jewels were her greatest possession, she had them searched all over Europe. On a trip to England, during which she campaigned for many French emigrants, she learned of the execution of Louis XVI. Although her new lover, the Duke of Brissac, had also been murdered shortly before, she saw the situation in France as safe for herself personally and therefore returned to Paris in March 1793. In September 1793 she was arrested there, her former page Zamor was one of the informants. She was brought before a revolutionary tribunal and charged with supporting the counterrevolution, contacting emigrants and wasting public property. The public prosecutor was Antoine Quentin Fouquier-Tinville . Fouquier-Tinville justified his plea for the death penalty by stating that after "the wife of the last French tyrant [...] the verdict on the mistress of his shameful predecessor" had to be pronounced. Both the Queen and the du Barry are "disgraceful conspirators" for whom "the freedom of the people was a crime". The jury agreed and sentenced them to guillotine death . In order to save her own life, the countess revealed in vain the hiding places in which she had hidden valuables at the beginning of the revolution, and the names of other people who were later also arrested and sentenced to death.

Marie-Jeanne du Barry was guillotined on December 8, 1793 on the Place de la Révolution . In contrast to the Louis XVI. and Marie Antoinette went their execution unusually humiliating. Since the Countess fought against this fate with all means to the end, the executioner Charles Henri Sanson and his servants repeatedly used physical violence immediately before the execution of the death sentence .

The Comtesse du Barry in Art and Literature 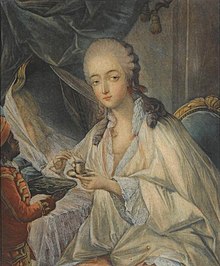 Numerous artists felt inspired by the life of Madame du Barry and immortalized her in her novels, paintings, films and music.