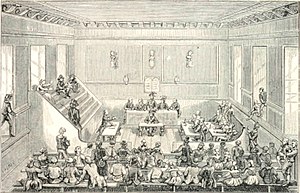 Le Tribunal révolutionnaire / The Revolution Tribunal : in the middle the five-person court with clerk, on the left the public prosecutor in front of the defendant under guard, opposite the 12 jury, in the foreground and in the windows numerous spectators.

The Revolutionary Tribunal ( French tribunal révolutionnaire ) was a court established by the National Convention for trials against political opponents of the French Revolution and became one of the most powerful engines of the reign of terror .

On March 10, 1793, on Danton's suggestion, the convention decided that an extraordinary criminal court should be installed in Paris, which was officially named Revolutionary Tribunal by a decree on October 29, 1793. It consisted of five judges and a prosecutor with two deputies, all appointed by the Convention; in addition, the kovent should appoint 12 citizens to be jurors. No appeal against his judgments was possible. With Martial Herman as court president and Antoine Quentin Fouquier-Tinville as prosecutor, the tribunal terrorized royalists, unruly priests and all actors of the counter-revolution. The tribunal met in the Paris Palais de Justice .

It was soon used for personal purposes, particularly by Robespierre , who used it to condemn his opponents. The excesses of the Revolutionary Tribunal increased with Robespierre's supremacy on the Welfare Committee . On June 10, 1794, at his instigation, the notorious Act of the 22nd Prairial ("Terror Act") was announced, which forbade prisoners to seek legal aid for their defense, suppressed the hearing of witnesses and the only death by the guillotine possible punishment. Between April 1793 and June 1794 1,487 people were sentenced to death; in July 1794 alone, a further 1138 people with a total of 1306 acquittals.

The list of prisoners to be sent before the tribunal was drawn up by a commission and, after revision, signed by the Security Committee and the Welfare Committee. Although Robespierre was the tribunal's chief evaluator, only one list has survived with his signature. The Revolutionary Tribunal was abolished on May 31, 1795. Among his most famous victims were Marie Antoinette , the Hébertists , the Dantonists and several Girondists . There were similar tribunals in the provinces.