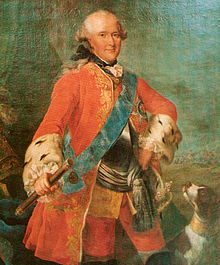 Ferdinand von Braunschweig - oil on canvas by Antoine Pesne around 1741 in the officer's uniform of his Prussian fusilier regiment (No. 39) with the star and sash of the Order of the Black Eagle and the Grand Cross of the Order of St. John

"Overview map on the history of the campaign of Duke Ferdinand of Braunschweig-Lüneburg in the year 1762." 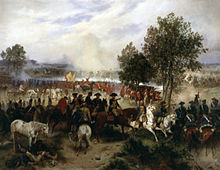 Ferdinand von Braunschweig in the battle of Krefeld , painting by Emil Hünten

Ferdinand was born as the fourth son of Prince Ferdinand Albrecht II of Braunschweig-Wolfenbüttel-Bevern . In 1740 Ferdinand became colonel and regiment chief of the Prussian Fusilier Regiment (No. 39) , which was partly built from the Braunschweig-Wolfenbüttel regiment "Sommerlatte" and, since his regiment was not yet fully equipped, volunteered in the 1741 campaign in Silesia. There he fought in the Battle of Mollwitz and in the Battle of Chotusitz at the side of his brother-in-law Friedrich II, King of Prussia . After the peace he remained its companion and companion and became major general of the infantry .

When the Second Silesian War broke out , he went with his regiment under Prince Leopold I of Anhalt-Dessau to Bohemia , was promoted to commander of the King's 1st Battalion Guard after his return and in 1745 accompanied the king to the army in Silesia. In the Battle of Hohenfriedberg on June 4, he and his brigade took the village of Thomaswalde and, although wounded, stormed a height occupied by the enemy at Thrush on September 30. His brother Albrecht was killed during thrush.

He enjoyed the special favor of the king, who placed him in garrison in Potsdam and took him on his inspection trips. Appointed lieutenant general in 1750 and governor of the Peitz fortress in Lusatia in 1752 , he was transferred to Magdeburg in the same capacity in 1755 and became head of the Bonin on foot regiment (1806: No. 5).

When the Seven Years' War broke out in August 1756, he led one of the three columns of the Prussian army advancing into Saxony, occupied Leipzig and set out for Bohemia on September 13 , where he commanded the right wing in the battle of Lobositz on October 1. When he entered Bohemia in April 1757, he led the vanguard and contributed a lot to the victory in the Battle of Prague on May 6th, and later led the siege of this city on the place of Prince Moritz von Anhalt-Dessau . In the Battle of Roßbach he commanded the right wing, whereupon he was released from service in the Prussian army at the request of Kurhannover in November after the abolition of the Zeven convention . As a general of the infantry, he received supreme command over the Allies in West Germany. As a result, Ferdinand knew how to raise the morale of his soldiers so that they almost always remained victorious over the much stronger French army.

After he had pushed Marshal von Richelieu back to Celle in December 1757 , he drove his successor Count Clermont back to the left bank of the Rhine in spring 1758 and defeated him in the Battle of Krefeld on June 23, 1758. In 1759 he was involved in the battle Bergen defeated on April 13th, but on August 1st inflicted a decisive defeat on the French general Marquis de Contades in the battle of Minden . In spite of the victorious battle of Warburg, he could not prevent the French from taking Hesse again after the defeat of his vanguard in the battle near Korbach in 1760 , but he kept them in check the following year through the defeat they suffered at Vellinghausen on July 16. He opened the campaign of 1762 with the attack near Wilhelmsthal on June 24th and ended it with the battle of the Brücker mill on September 21st and the armistice of November 15th.

Furthermore chief of the regiment on foot No. 5 he returned to Magdeburg as governor , appointed field marshal . Induced by a tension with the irritable king to say goodbye in 1766 , he has lived in Braunschweig or at his pleasure palace in Vechelde since then . The relationship with Friedrich II relaxed again later. The king visited Ferdinand at least four times between 1772 and 1782 on his property in Vechelde. Artists and scholars found a generous patron in Prince Ferdinand. In 1789 he became commander of the Johanniterkommende Gorgast .

Increasingly ill since 1784, Ferdinand died of pneumonia in Vechelde in 1792 . He was first buried in his Vechelder garden. Fearing that he would be buried alive, he had his coffin fitted with windows, air holes and a key so that it could be opened from the inside if necessary. At the top of the coffin he had a metal plate with the following inscription attached:

Ferdinand,
lord of the Vechelde estate from 1762,
born in Braunschweig
on the small fattening farm on January 12,
1721

Ferdinand's coffin was later transferred to the crypt of the Braunschweig Cathedral of St. Blasii.

Ferdinand was an honorary member from 1768 and honorary president of the Göttingen Academy of Sciences from 1780 .

Ferdinand von Braunschweig was accepted into the Masonic lodge by his brother-in-law Friedrich II in 1740 . For the Duchy of Brunswick he became the English Provincial Grand Master from 1770 and joined the Strict Observance a year later . At the Kohlo convent he was given the office of Grand Master of all Scottish lodges in 1772 . He convened the Wilhelmsbad Freemasons Convention , which lasted from July 16 to September 1, 1782 and ultimately resulted in the dissolution of the Strict Observance. Like Karl von Hessen-Kassel , he became a member of the Order of the Illuminati in 1783, and in 1786 he received the dignity of General Master of the Asian Brothers .

A bust made by Johann Gottfried Schadow in 1808 in the Walhalla in Donaustauf commemorates Ferdinand, Duke of Braunschweig-Lüneburg, as Hanover's liberator .