Hadrat Pir Muhammad Nureddin al-Jerrahi al-Halveti (* 4. May 1678 in Istanbul ; † 28. July 1721 ) was an Ottoman- Islamic mystic ( Sufi ) and the founder of the eponymous Jerrahi - Tariqa (Dscherrahi- dervish -Orden ), a branch of the Halveti -Tariqa. 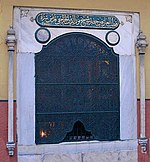 In 1697, at the age of 19, he is said to have graduated faqih (Islamic legal scholar) from the Islamic religious school with honors. He is said to have been offered the office of Qadi of Egypt (then a province of the Ottoman Empire ), but on the day of his planned departure for Egypt he is said to have met Halveti Sheikh Alauddin Kostendili in Üsküdar (in the Asian part of Istanbul). After taking part in the Dhikr (Sufi ceremony to invoke the names of God ) he was there as a student of him was accepted and therefore did not leave for Egypt.

1703–1704 Nureddin himself is said to have reached the level of Sufi Sheikh and was sent from Kostendili to Karagümrük (a district in the European part of Istanbul) to found the Jerrahi-Tariqa, a new branch of the Halveti-Tariqa, and one To open the dergah (place of dervish gatherings).

The Jerrahi-Tariqa developed in Turkey into a cultural association for the cultivation of classical Sufi music, the center is still located in Karagümrük, where the tomb of Pir Nureddin can be found, a place of pilgrimage for Sufi Muslims. The best - known successor of Pir Nureddin is Muzaffer Ozak al-Dscherrahi al-Halveti (1916–1985), who achieved international dissemination of the music and the mystical teachings of the Jerrahi-Tariqa.