Georg August was just 12 years old when his father Johann died in 1677. The government was initially taken over by the two guardians Johann Caspar von Leiningen-Dagsburg, a brother of his mother, and Count Johann August von Solms. Georg August used this time to study in Giessen , Strasbourg and Paris , and later also in England and Brabant . He also got to know various European courts, and the Palace of Versailles particularly impressed him. In 1683 he took part in the defense of Vienna during the second Turkish siege . A year later, on his 18th birthday, he became the ruling count. On August 4, 1688, Emperor Leopold I made him prince because of his services to the liberation of Vienna and after paying a large sum of money .

On November 22, 1688 he married Princess Henriette Dorothea (born November 14, 1672 in Oettingen ; † May 23, 1728 in Wiesbaden), daughter of Prince Albrecht Ernst I of Oettingen-Oettingen and Christiane Friederike von Württemberg . He subsequently had a total of 12 children with her, of which, however, the three sons all died at an early age. 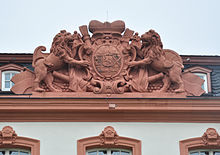 The city of Wiesbaden and the entire county of Nassau-Idstein suffered badly in the Thirty Years' War and the plague in 1675. Only a few dozen of the original 1,800 inhabitants of Wiesbaden were still alive. Under Georg August, both experienced an enormous upswing. He initiated a brisk construction activity. Among other things, he completed the residential palace in Idstein , laid out the Herrengarten and the pheasantry in Wiesbaden , had the previous building of the city ​​palace rebuilt and expanded, and laid out a baroque garden on the banks of the Rhine in Biebrich . A first garden house was the cornerstone of what would later become Biebrich Castle , which was only completed after his death.

Georg August died of smallpox in 1721, as did his two youngest daughters . After his death, Nassau-Idstein fell to Karl Ludwig von Nassau-Saarbrücken († 1723 in Idstein) and Friedrich Ludwig von Nassau-Ottweiler († 1728). In 1728 Idstein and Wiesbaden became part of the Principality of Nassau-Usingen .