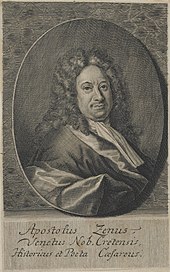 Apostolo Zeno came from one of the older Venetian noble families. His mother, Caterina Sevastò, came from Candia , the capital of the Venetian Crete . She later married Pier Antonio Cornaro. Apostolo later lived with his mother's brother-in-law and Bishop of Capodistria . He succeeded as a poet, but turned down all offers to write poetry at court and stayed in Venice.

Zeno dealt intensively with history , philology and coin studies and was a co-founder of the Accademia degli Animosi (1691), which set itself the goal of restoring “good taste”. With his brother Pier Caterino Zeno and with Scipione Maffei and Antonio Vallisneri , he founded Italy's first critical literary magazine in 1710 under the title Giornale de 'letterati d'Italia . In addition, from 1696 he wrote opera libretti for Venice , Milan and Pratolino , e.g. T. in collaboration with Pietro Pariati . Although these works make up a large part of his oeuvre and were set to music again and again, he himself considered them to be secondary, as he felt too restricted by the need to entertain the audience and preferred to pursue moral goals.

In 1718 Zeno went to Vienna as court poet and historian , where he again worked with Pariati as a librettist and as a scholar took care of the imperial coin collections. From Emperor Charles VI. he was heavily patronized and appointed historiographer. In 1722 he was accepted into the Accademia della Crusca in Florence . He acquired a number of Greek manuscripts for the Viennese court. He also arranged for the Roman monuments discovered in Weissenburg , Transylvania in 1722 to be brought to Vienna and built into the walls of the main entrance to the court library .

When Pietro Metastasio was appointed court poet in 1729 , Zeno returned to Venice and from then on devoted himself only to coin studies . His important coin collection was auctioned in Vienna from 1955; the auction catalog was compiled by the Austrian numismatist Robert Göbl .

Zeno's dramatic works comprise 60 pieces in ten volumes, which were published in Venice in 1744, then in Turin in twelve volumes in 1795. A German edition of 17 of his works appeared in Augsburg in 1758. Zeno endeavored to reform the melodrama in line with the classic French tragedy of the 17th century. In addition to melodramas such as Gli inganni felici (1695), Merope (1712) and Ifigenia in Aulide (1718), he wrote a total of 17 oratorios with biblical content such as Giuseppe and Ezzechia from 1719 to 1737 .

Zeno was also important as a literary historian, critic and bibliographer . Of his numerous works belonging here, the Dissertazioni istorico-critiche e letterarie agli istorici italiani (2 vols., Venice 1752/53), the Compendio del vocabolario della Crusca (2 vols., Venice 1705; 6 vols., Ibid . 1741–45), the memo letterarie intorno a 'Manuzj (before the edition of Aldus' translation of Cicero's letters, 2 vol., Venice 1736) and the biographies he wrote before the editions of various Italian writers such as Paruta , Davila, Redi u. a. He also edited an edition of Giusto Fontanini's Biblioteca dell'elo puncta italiana (2 vols., Venice 1753).

In 1894 the Zenogasse in Vienna- Meidling was named after him.

Zeno strove for an upscale, dignified style, taking into account the three Aristotelian units . His pieces should arouse pity and horror in the audience and thereby purify them morally. In his early works there are still comical elements, which he later pushed back more and more. He rarely worked on mythological topics; he preferred historical and exotic materials, always giving precise details of his sources.