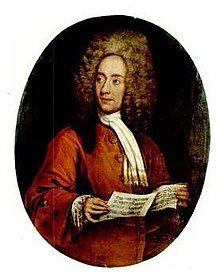 Albinoni was the second child and eldest son of the stationery and playing card manufacturer Antonio Albinoni (around 1634–1709) and his wife Lucrezia, b. Fabris (around 1645–1687) was born in the Venetian parish of San Moisè . Antonio Albinoni inherited the entire company after the death of his employer in 1684, whereby the family came to considerable prosperity; In addition to the house and the neighboring business premises, this also included a country house with land on the mainland in Prata di Pordenone .

Tomaso Albinoni initially trained as a playing card maker in his father's company and also took violin , singing and composition lessons . His teachers are unknown; a more often suspected apprenticeship with Giovanni Llimani has not yet been proven. In 1694 he appeared as a composer for the first time, both with an opera ( Zenobia, regina de Palmireni ) and with a collection of instrumental works (12 Suonate a tre op. 1). Due to his main trade as a craftsman, he was initially not dependent on earning a living with music, and therefore referred to himself as a dilettante veneto .

Zenobia was the beginning of an extensive operatic career. From then on, Albinoni composed an average of one or two operas per year, initially for Venice, from 1703 increasingly for other cities ( Florence , Genoa , Bologna , Ferrara , Brescia , Rome , Treviso ), where he directed some of the premieres himself. In addition, he published eight other collections of instrumental works and a collection of solo cantatas by 1735/36 .

On March 17, 1705 Albinoni married in Milan the singer Margherita Raimondi (1683 / 84-1721), who had made her debut in Venice at the age of 15, and settled with her in the Venetian parish of San Trovaso . The marriage resulted in three sons and four daughters. Margherita Albinoni also appeared on the opera stage after her marriage, but with one exception ( I rivali generosi , Brescia 1715), apparently never in her husband's works.

Albinoni's father died in January 1709. At that time Albinoni had already decided not to continue the profession he had learned and to devote himself entirely to music. The father's company was therefore passed on to his two younger brothers Domenico (1675–1726) and Giovanni (1679–1718); However, Tomaso should be entitled to a third of the income. From then on, he referred to himself as Musico di violino on the title pages of his printed works . In 1721 the family business - now indebted - was taken over by a creditor, so that Albinoni now had to pay for his own living and moved to the less upscale parish of San Barnaba. According to an illustration from the 19th century, he ran a flourishing singing school, about which nothing is known. On August 22, 1721, his wife died of an intestinal inflammation.

From the 1720s onwards, Albinoni's operas were also frequently performed outside of Italy; the most popular were the comical intermezzi (Vespetta e) Pimpinone (1708).

Albinoni reached the high point of his career in 1722. After the publication of his hitherto most ambitious concert collection, the 12 Concerti a cinque op. 9, which were dedicated to the Elector Maximilian II Emanuel of Bavaria , he received two compositions from Munich : For the wedding by Maximilian's son Karl Albrecht, the later Emperor Karl VII. , with Maria Amalie , the daughter of the late Emperor Joseph I , Albinoni wrote the opera I veri amici and the smaller "componimento poetico" II trionfo d'Amore . He himself conducted the very successful world premieres on October 24th and November 4th in Munich. In a report about this in Johann Mattheson's Critica Musica it is particularly emphasized that "the right Albinoni" participated in the event, because at that time in Germany and Sweden was a fraudster who pretended to be "Tomaso Albinoni of Venice".

As the dedications of his printed works show, Albinoni was also in contact with other prominent personalities of his time, including Cardinal Pietro Ottoboni (dedicatee of op. 1), Duke Carlo IV. Gonzaga (op. 2), Hereditary Grand Duke Ferdinando of Tuscany (op. 3 ), Cardinal Francesco Maria de 'Medici (op.4), Marquis Carlos Felipe Spínola y Colonna (op.5), Count Christian Heinrich von Watzdorf (op.8) and Marquis Don Luca Fernando Patiño (op.10). Albinoni also wrote the music for Emperor Charles VI's name days . ( Il nome glorioso in terra, santificato in cielo , 1724) and his wife Elisabeth Christine von Braunschweig-Wolfenbüttel ( Il nascimento dell'Aurora , approx. 1710). Albinoni, however, evidently had little contact with his musical colleagues; he was not a member of the official Venetian musicians 'associations ( Arte de' Sonadori , Società Santa Cecilia ). Although he wrote several works for the stage together with other composers, these collaborations were probably mediated by the theater directors. There is evidence of a meeting with Johann Georg Pisendel , to whom Albinoni dedicated a violin sonata.

In the 1730s, Albinoni's creative power gradually waned; he completed his last two operas in 1734 ( Candalide ) and 1741 ( Artamene ). In 1743, at the age of 72, he applied for the well-paid position of maestro di coro and singing teacher at the Ospedale dei derelitti ( Ospedaletto ); however, the choice fell on Nicola Porpora . He spent the last ten years of his life with three of his children in rather modest circumstances, most recently confined to bed for two years due to an illness (according to the obituary "diabetes and catarrh").

Albinoni's compositional work focuses on opera , cantata and instrumental music . In the spiritual field , only an early mass for three unaccompanied male voices (before 1694) and the titles of two oratorios have survived ( I trionfi di Giosuè , 1703, joint work with Alessandro Scarlatti , Giovanni Battista Bononcini and others; Maria annunziata , 1712). A Magnificat in G minor that was widespread under Albinoni's name does not come from him.

How many stage works Albinoni composed can no longer be determined exactly. Only seven have been completely preserved:

At least individual arias have survived from 17 operas, only the (printed) libretto of 32 others , and even only the title of an Intermezzi series ( Malsazio e Fiammetta , 1726). In Candalide's libretto (1734), Albinoni describes this opera as his eightieth; if this is not an exaggeration, another 23 stage works must be considered completely lost.

Albinoni's cantatas amount to 44 well-known works, 12 of them in the printed collection Cantate da camera a voce sola op. 4 (Venice 1702) and 18 in a handwritten collection in the Berlin State Library . All cantatas are written for a voice and basso continuo (about three quarters for soprano , one fourth for alto ); further instruments are only added in the (incompletely preserved) cantata E dove, Amor, mi guidi .

From 1694 to 1735/36 Albinoni had nine collections of instrumental works printed by Sala in Venice , and from around 1711 by Roger and Le Cène in Amsterdam . Four of them belong to the chamber music genre:

The remaining five are concert collections with a larger cast:

The violin usually appears as a solo instrument ; eight concerts from opp. 7 and 9 are written for oboe and eight more for two oboes.

In addition to the nine authorized printed works, three further collections of violin sonatas were published during Albinoni's lifetime , which had been put together by the publishers themselves and some of them also contained works not by Albinoni:

A collection of six Sonata a tre op. 11 was probably submitted for printing by Albinoni himself around 1739, but has never been published (the manuscripts are lost).

Nine symphonies , five violin concertos and 29 sonatas (including three in the autograph ) have survived as handwritten instrumental works .

At least 26 instrumental works that are ascribed to Albinoni in one or more sources must be considered doubtful due to stylistic criteria. These include the Concerto in C major for trumpet , three oboes and two bassoons , recorded several times on record , the six symphony a quattro (around 1735) and the most popular work ever associated with Albinoni, the Adagio in G minor for strings and organ . The latter was published in 1958 by the Italian Albinoni biographer Remo Giazotto and is said to be based on fragments of a trio sonata by Albinoni, the authenticity of which has not yet been proven.

In contrast to the virtuoso, romantic style of his compatriot Vivaldi , Albinoni's music is characterized by classical balance in the sense of Corelli . Characteristic are a cheerful mood, long melodies , pulsating rhythms and a tendency to repetition. The voice leading is often contrapuntal ; many final movements of sonatas and concerts are designed in fugue form . Albinoni's solo parts are less demanding than Vivaldi's and can therefore also be mastered by amateurs; Oboe solos are often performed like vocal parts, chromatics and unexpected modulations are only used sparingly.

Albinoni's strengths lie primarily in his formal and thematic clarity and in his melodic inventiveness. He was not a great musical innovator and was hardly influenced by the trends of his time, but precisely because of this he developed a pronounced individual style that makes his works unmistakable to this day.

During his lifetime Albinoni was one of the most famous composers in Italy and was placed on a par with Corelli and Vivaldi . His operas were present on the Venetian stages for almost 50 years (longer than those of most of his contemporaries), his printed instrumental works were reprinted several times in Venice , Amsterdam and London and enjoyed great popularity - especially with amateurs. Albinoni was the first composer to consistently create concerts in three movements and the first Italian composer to publish oboe concerts . Johann Sebastian Bach wrote four joints for harpsichord on themes from Albinoni's op 1 (. BWV 946, 950, 951 and 951a) and let his students Albinoni'sche General bass expose; Johann Gottfried Walther transcribed two of the concertos from op. 2 for organ .

After his death, Albinoni's music was initially forgotten. It was not rediscovered until the middle of the 20th century , with the musicologist Remo Giazotto playing an important role (both through his Albinoni biography from 1945 and through his Adagio in G minor, ascribed to Albinoni ). Most of Albinoni's surviving works are now available in modern prints (a complete edition of the instrumental music has been published by Edition Kunzelmann since 1974); With the exception of op. 8, all instrumental collections with an opus number, a series of instrumental works without an opus number, the cantatas op. 4 and four of the seven preserved stage works are available on record or CD.