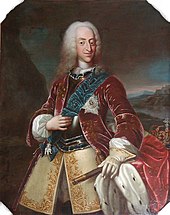 Sophie Magdalene as Queen of Denmark

Christian VI. was the second son of Frederick IV of Denmark and his wife Louise of Mecklenburg .

On the occasion of a trip, Christian came to Saxony in July 1721, where he paid his respects to the resident Electress and Polish titular queen Christiane Eberhardine in Pretzsch . He met Princess Sophie Magdalene von Brandenburg-Kulmbach , who was in her court , and immediately fell in love with her. After his father had given King Friedrich IV the permission for the wedding, as well as Sophie Magdalene's widowed mother and the wedding modalities had been negotiated, this took place on August 7, 1721 in Pretzsch Castle.

Christian rule was marked by a severe economic crisis in Denmark, but also by a time when the kingdom had not been at war for many years. The king and his wife were markedly pietistic , which resulted in the obligation to attend church for the Danish people. He lived withdrawn from the population; When traveling, the windows of the royal carriage were always covered. Christian VI. nevertheless demonstrated absolutist power, especially through the construction of the castles Christiansborg and Hørsholm (Hirschholm). He gave the Drage estate in Schleswig-Holstein to his wife's brother, Margrave Friedrich Ernst from the House of Brandenburg-Kulmbach , for their wedding .