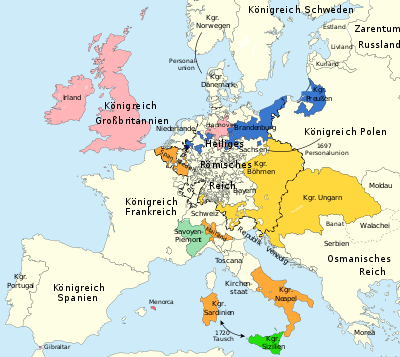 Europe in 1713 after the peace treaties of Rastatt and Utrecht with the essential territorial changes: Habsburg profits (Spanish Netherlands, Duchy of Milan, kingdoms of Naples and Sardinia) profits of Savoy-Piedmont (Kingdom of Sicily, exchanged for Sardinia in 1720) British profits (Menorca, Gibraltar) Prussian profits (parts of Obergeldern)
﻿
﻿
﻿
﻿

The War of the Spanish Succession (1701–1714) ended with the Peace of Rastatt . The treaty between France and Austria essentially confirmed the previous Treaty of Utrecht , which Austria had not yet wanted to accept.

The peace negotiations in Rastatt began on November 26th, 1713. On March 6th, 1714 (according to other sources on March 7th) the peace was concluded. The Peace of Rastatt was followed by the Peace of Baden between other parties involved in the war, in particular between France and the Holy Roman Empire.

Marshal Villars negotiated on the French side , and Prince Eugene of Savoy was in charge of the negotiations for the Emperor .

Breisach am Rhein , Freiburg im Breisgau and Kehl , the Spanish Netherlands , Sardinia and the parts of Italy that formerly belonged to the Spanish crown, including Lombardy with the Duchy of Milan , the Duchy of Mantua and the Kingdom of Naples , fell to Austria .

France had to evacuate all conquests, especially those on the right bank of the Rhine, but remained in the possession of the city of Landau in the Palatinate with its fortress .

The emperor Karl VI. had to give the French allies, Elector Max Emanuel of Bavaria and the Archbishop of Cologne, Joseph Clemens of Bavaria , their former status and property back.

The contract was written in French instead of the previously customary Latin . The main reason for this was the low level of trust in Marshal Villar's own knowledge of Latin, who had a military, but no diplomatic, training. He feared that he would be taken advantage of in translating the results of the negotiations into Latin after he had been warned by the French Foreign Minister Torcy against endless negotiations on individual formulations and time-consuming inquiries with the governments in Vienna and Paris. In contrast, Louis XIV would have accepted a Latin version of the treaty. Despite a clause that this should not set a precedent for future international treaties, French subsequently became the language of diplomacy. The provisional clause appeared in almost identical form in the preliminary peace treaty of Vienna (1735), the peace treaty of Vienna (1737) and the peace treaty of Aachen (1748). In the Treaty of Hubertusburg (1763) was abandoned for the first time on it.