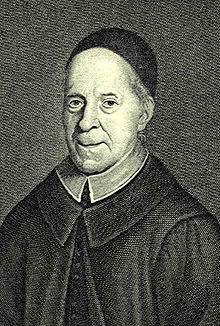 After leaving the Sorbonne in 1653 with an excellent degree, Quesnel entered the French oratorio founded by Pierre de Bérulle in 1657 . He was quickly known - among other things he edited the works of Charles de Condren - but his sympathies for Jansenism led to his exile from Paris in 1681. He found refuge with Cardinal Coislin , the Bishop of Orléans ; four years later, in anticipation of further persecution by the Jesuits, he fled again, this time to Brussels, where he made contact with Antoine Arnauld . He stayed in Brussels until 1703 when he was arrested on the instructions of the Archbishop of Mechelen Humbertus Guilielmus de Precipiano . After three months in prison, Quesnel escaped under dramatic circumstances, and he settled in Amsterdam to spend the rest of his life there.

After Antoine Arnauld's death in 1694, Quesnel was widely regarded as the leader of the Jansenist movement. His reflection morales sur le Nouveau Testament was almost as important for Jansenism as Jansenius' Augustine . As the title suggests, it was a pious commentary on the writings of the New Testament, in which Quesnel succeeded in presenting Jansenius' ideas in a generally understandable form, and which therefore enjoyed great popularity. It was precisely because of this that they aroused anger and violent opposition from the Jesuits who were led by Pope Clement XI. finally obtained the bull Unigenitus Dei filius of September 8, 1713, through which 101 sentences from the Reflexions morales were condemned as heretical without Quesnel having the opportunity to defend his views. Because the bull also condemned some of Augustine's sentences as heretical in principle , a number of bishops protested against it, which culminated on March 5, 1717, when four bishops and the Sorbonne appealed to a general council. Rome rejected the appeal.