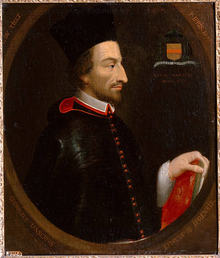 Cornelius Jansen came from a Catholic family in South Holland . From 1602 he devoted himself to studying theology in Leuven . There he got into the disputes between the Jesuits and the followers of Michael Bajus , whose teaching he turned to. In Leuven he met Jean Duvergier de Hauranne . In 1604 he went to Paris, a few years later he lived and taught near Bayonne , where he took over the management of a newly established college. Together with Du Vergier he studied the writings of the church fathers, especially Augustine . In 1616 (1617?) He became head of a college in Leuven, where he again came into conflict with the Jesuits. In 1624 and 1626 he was sent to Madrid to counteract the growing influence of the Jesuit mission in Leuven (probably with success). In 1630 he became professor of exegesis at the University of Leuven and taught strict Augustinism, especially with regard to the doctrine of free will and divine grace.

However, Jansen was not only concerned with theology, but also had political dreams: he hoped for Flanders to be liberated from Spanish rule, following the example of the Netherlands . In order to dampen the inevitable difficulties with the Spaniards, he wrote the political pamphlet Alexandri Patricii Armacani Theologi Mars Gallicus seu de justitia armorum regis Galliae libri duo in 1635 under the pseudonym Armacanus . In it he denounced the shady policies of Cardinal Richelieu , who made pacts with Calvinists to harm the Catholic Habsburgs .

In 1636 he became bishop of Ypres , but died of the plague on May 6, 1638, after he had written his main work Augustine, sive doctrina Sti. Augustini de humanae naturae sanitate, aegritudine, medicina adversus pelagianos et massilienses had just completed.

Jansen's writings as professor of exegesis are thoroughly orthodox and were printed several times after his death. This also includes polemics directed against Calvinists . His official activity - viewed benevolently - did not prevent him from dealing with the problem of grace in the sense of Bajus. Between 1617 and 1635 he was in lively correspondence with the Abbot of St. Cyran, Du Vergier (published in 1654); in it he developed his interpretation of the Church Father Augustine. His goal was a renewal of the Roman Catholic Church - and this by no means in the spirit of the Protestants.

In his view, the church had fallen into three errors: the scholastic theology (especially that of the Sorbonne in Paris) had become far from preaching, it had only ceremonies to offer the simple believer and little more than a moral religion close to the Stoics for the thoughtful. In his main work Augustine ... , on which he said he had worked for over 20 years, he explained philosophy , especially the Aristotelian one (which the scholastics followed), as the mother of the Pelagian heresy, and in a strictly Augustinian way asserted the complete corruption human nature and free will, from which the doctrine of predestination follows. Few are chosen to come to eternal bliss. This view seems to bring Jansen closer to the Calvinists. However, he has always been a staunch opponent of the doctrine of justification by faith. He also always remained convinced that the believer's personal relationship with God could only lead to "salvation of the soul" within the (Roman) Catholic Church.

This way of thinking was now called Jansenism and its followers Jansenists; their most ardent opponents were the Jesuits from the start. An example of the longstanding conflict is the biography and bibliography of the Bohemian Count von Sporck .