Entry of the Spanish troops into Antwerp

Contemporary depiction of the Battle of Amerongen

Spectacle on the Rhine to celebrate Jacob's wedding 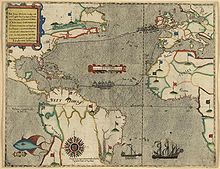 Drake's route of the pirate voyage through the Caribbean, hand-colored copper engraving by Giovanni Battista Boazio , 1589

Sir Francis Drake , who married his second wife Elizabeth Sydenham on February 9 , receives a commission from Queen Elizabeth I of England on July 1, authorizing him to attack Spanish ports and ships. A total of 25 ships and eight pinnacles under his command will leave on September 14th and sail for the Caribbean . First, Drake attacks Santo Domingo , where he destroys a third of the city and sets all ships in the port on fire. He then turns against Cartagena . 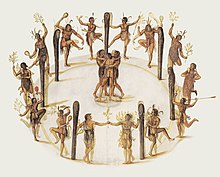 Drawing made by a settler of Indians on Roanoke

Richard Grenville sets out on April 9th with 600 people from Plymouth for the new world. Together with 107 other people, he founds the first English settlement on the east coast of North America. The settlement of Roanoke Island planned by Sir Walter Raleigh last year is developing into a disaster. The settlers arrive too late for a cheap harvest and also get into a dispute with the native Indian tribes. 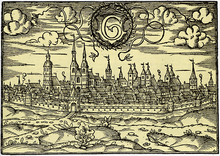 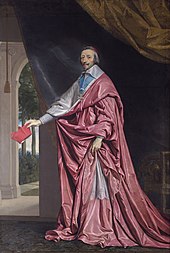