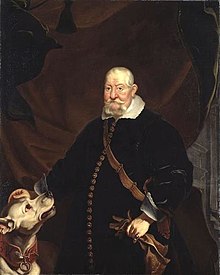 Elector Johann Georg I with dog,
portrait by Frans Luycx , 1652

Elector Johann Georg I of Saxony (born March 5, 1585 in Dresden ; † October 8, 1656 ibid) was a prince from the House of Wettin ( Albertine line). Since June 23, 1611 he was Elector of Saxony and Archmarschall of the Holy Roman Empire . He was the second son of Elector Christian I and succeeded his childless brother Christian II in the government.

The beginning of the reign of Johann George I coincided with the intensifying tensions between Protestants and Catholics in the empire, and as the sovereign of the most powerful Protestant territory he would actually have been predestined to lead the evangelical imperial estates. However, the Wettin and his government stuck to the traditional equalization policy of Saxony, which was aimed at preserving the status quo of the Augsburg religious peace. This path was practically mapped out because the ruling forces in Lutheran Saxony categorically rejected a closer connection with the Calvinists under the leadership of Frederick V of the Palatinate . The empire of the Catholic Habsburgs recognized Johann Georg without any compromises.

Logically, in 1619, the elector also refused the application for the crown of Bohemia , which had been proposed to him by the leader of the moderate Protestant estates in Bohemia, Joachim Andreas von Schlick , because then he would have had to face the Habsburg Ferdinand II . After the death of Emperor Matthias (March 1619) as imperial vicar, he decided to support the election of Ferdinand II as Roman emperor - see vicariate coins . Johann Georg entered into an alliance with Ferdinand and fought the supporters of the Calvinist Bohemian King Friedrich V of the Palatinate in Lusatia and Silesia . The war against the Bohemian neighboring countries was formally assigned to Johann Georg by the emperor as an execution of the empire , which Lausitz promised him as a pledge.

Although Johann Georg I assessed the Counter-Reformation that began after the Battle of White Mountain in Bohemia and later also in Silesia as a breach of his agreements with the emperor, he did not openly oppose the emperor, but remained neutral in the following years of the Thirty Years' War, similar to the Brandenburg Elector Georg Wilhelm , but from a stronger position and with more success, and thus largely spared his country the chaos and atrocities of war. After the destruction of Magdeburg in May 1631, also pushed by public opinion, Johann Georg could no longer do so, especially since the imperial general Tilly , shortly after he had destroyed Magdeburg, against the express will of the emperor and Bavaria - wanted to keep the Saxons neutral - raided Electoral Saxony and took Merseburg and Leipzig . This moved Johann Georg to join King Gustav Adolf of Sweden with an alliance treaty on September 11, 1631 . The newly formed Saxon army united with the Swedish army at Bad Düben and after the victory in the Battle of Breitenfeld (1631) was able to free the country from the enemies by fleeing shortly after the battle began.

After Gustav Adolf's death in the Battle of Lützen (1632) and intimidated by the victory of the imperial in the Battle of Nördlingen (1634), Johann Georg fell away from the Protestant cause, after lengthy negotiations at Eilenburg and Pirna on May 30th In 1635 the peace in Prague was made with the emperor and the two Lausitzes were enfeoffed as hereditary property ( traditional recession ). He allied himself with Emperor Ferdinand II to expel the French and Swedes from the empire. The country atone for this defection of the elector after the unfortunate battles at Dömitz (October 22nd) and Kyritz (December 7th) through terrible devastation with which the Swedes under General Johan Banér afflicted it.

In 1636 Johann Georg besieged the Swedish-held city of Magdeburg together with imperial troops . He had his headquarters temporarily in Westerhüsen and later in Salbke . The city surrendered on July 3rd.

After the victory over the Saxons and the Imperialists at Wittstock (September 24, 1636), Banér appeared for the second and in February 1639 for the third time in Saxony , after his victory at Reichenbach occupied Zwickau , besieged, albeit in vain, Freiberg and defeated the Imperialists and Saxony on April 4th near Chemnitz . 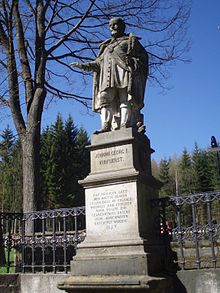 Zwickau was conquered back by the Saxon Elector on June 7, 1642, but Leipzig was lost to the Swedes as a result of Torstensson's victory over the Imperialists (November 23). Most recently, after destroying the Saxon army at Jüterbog and burning Pegau in October 1644, Torstensson forced through heavy contributions and supported by the ideas of the elector the wavering elector the armistice of Kötzschenbroda (27 August July / 6 September 1645 greg. ), which put an end to at least the most severe war disruptions for Saxony. The Peace of Westphalia confirmed Johann Georg I the acquisitions of the Peace of Prague.

Johann Georg I was often in dispute with his estates, mostly due to the country's deep indebtedness caused by the war and the waste of the court.

Johann Georg I lacked fine manners and all too often he indulged his passion for hunting and drinking (derisive name "Bierjörge"), which was even circumvented in an orally handed down legend written down by Johann Georg Theodor Grasse ( The strange foundation in Kötzschenbroda. ) . In order to be able to meet both, he had a pleasure palace built on the courtly Hoflößnitz winery . He also had Börln Castle built as a hunting lodge and the former imperial castle of Königstein Fortress transformed into a representative Renaissance hunting lodge. Since then the latter has been known as "Johann-Georgenburg". He was also a great dog lover and was often portrayed with his dogs. He was particularly taken with the English dogs , the later Great Danes . It was an open secret that a country gentleman could win the favor of the elector by sending a beautiful English dog . His strict Lutheran loyalty to the confession and his hostility to the Reformed Church were nourished as much as he could by his court preacher Hoe von Hoenegg , although his influence was often overestimated in older literature.

Johann Georg I married Princess Sibylle Elisabeth of Württemberg († January 20, 1606) in his first marriage on September 16, 1604, and after her death in childbirth on July 19, 1607, Magdalena Sibylle of Prussia was his second marriage . Until 1618 he was guardian of the Altenburg princes and until 1615 of the Weimar princes (see Achtbrüdertaler ). He died on October 8, 1656 in Dresden and was buried in Freiberg Cathedral . In his will he created separate duchies ( Saxony-Merseburg , Saxony-Weißenfels and Saxony-Zeitz ) for his later sons from the Saxon electoral state .

In 1623, Elector Johann Georg von Sachsen bought the rule of Dobrilugk for 300,000 thalers from the Promnitz brothers ; thus also Dobrilugk Castle , which he wanted to have converted into a hunting lodge. In 1654 he approved the establishment of Johanngeorgenstadt by expelled Bohemian exiles directly on the Saxon border in the Schwarzenberg office . He determined that the new city should bear his name.

On his deathbed, Johann Georg, according to his pastor Jakob Weller , said the confession “I will not leave my Jesus” several times. Weller referred to this several times in his memorial sermons for the elector, for example on October 16, 1656 in Dresden. Christian Keimann wrote the hymn of the same name ( EG 402) sung to this day about the movement . In the older literature, the interpretation of the first letters of the last stanza J – G – C – Z – S as initials of "Johann Georg Churfürst zu Sachsen" is common.

Johann Georg I married Sibylle Elisabeth von Württemberg on September 16, 1604 in Dresden , daughter of Duke Friedrich I von Württemberg from his marriage to Sibylla von Anhalt . She died during the stillbirth of her only child: 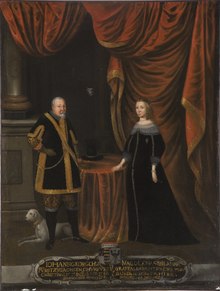 Then he went on July 19, 1607 in Torgau a second marriage with Magdalena Sibylle von Prussia , daughter of Duke Albrecht Friedrich von Prussia from his marriage to Marie Eleonore von Jülich-Kleve-Berg . Ten children come from this connection:

Commons : Coins from Johann Georg I.  - Collection of pictures, videos and audio files