Duke Magnus I of Saxe-Lauenburg 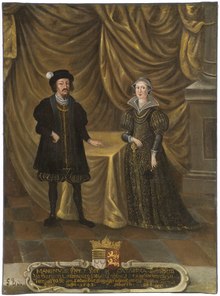 Magnus I and Katarina.

Magnus was a son of Duke Johann IV from his marriage to Dorothea , a daughter of Elector Friedrich II of Brandenburg . Of the 13 children who emerged from this connection, Magnus was the only one who continued the Lauenburg family. Already during the last years of his father's life he led the country's government because of his advanced age.

The first period of his reign was fulfilled by various disputes with the Archbishopric of Bremen and the Abbey of Ratzeburg . At that time, based on the foundation letter of Charlemagne for Bremen from the year 788, now recognized as forged, the former sought his supremacy over the Frisian landscapes on both sides of the Jade , also over the lands of Hadeln and Wursten , with which the dukes of Lauenburg were enfeoffed to restore. Therefore, in 1498, Magnus, accompanied by his father and at the head of the so-called Great or Black Guard , undertook an army campaign in the Bremen region and in the following year in the Wursten region . Although he was not happy here, he maintained his possession of Hadeln , while the dispute over sausages was referred to the emperor for decision through the mediation of the dukes Erich and Heinrich von Braunschweig.

The dispute with Bishop Heinrich von Ratzeburg , who had previously been in the duke's service, lasted longer . These disputes started out from the rights of the depositor in the penal settlements, which the latter had claimed, and grew to such bitterness that Magnus fell under the spell of the church and his land was occupied with the interdict . It was not until 1519 that a comparison brokered by Bishop Johann von Lübeck and the Dukes of Mecklenburg put an end to this turmoil.

With regard to the electoral vote , which had been in dispute for a long time between the two lines of the Saxon ducal house , Magnus was the first of the Lauenburg dukes to adopt a compliant stance. He had neither the electoral title nor the Kurschwerter in his coat of arms. On November 12, 1530 he received from Emperor Charles V at the Reichstag in Augsburg the enfeoffment with his duchy and the regalia. In the loan letter it is expressly emphasized that the duke had asked for the cure of Saxony to be enfeoffed, but that this could not take place “for moving reasons”. The added comment that this should not affect his rights by the way, of course, had nothing to do with it.

Duke Magnus, who from his marriage to Katharina , a daughter of Duke Heinrich the Elder of Braunschweig, had a son Franz and five daughters, died on August 1, 1543. He is buried in Ratzeburg.

Magnus had the following children from his marriage: